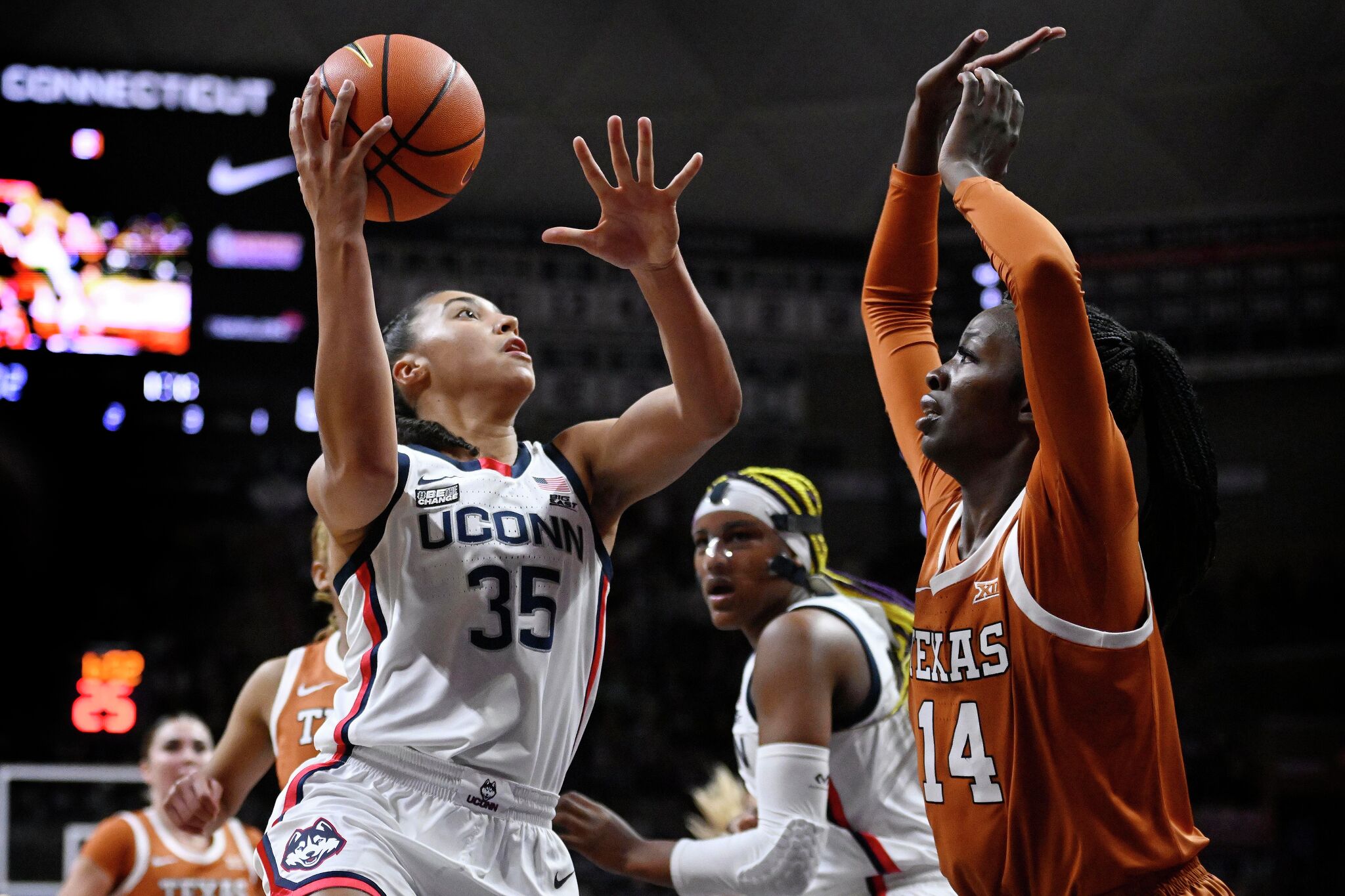 STORRS — The No. 5 UConn women’s basketball team passed its first test of the season, but it was far from easy.

The Huskies defeated No. 3 Texas 83-76 in front of an announced sell-out crowd at the Gampel Pavilion Monday night.

Before the tip, UConn (2-0) honored former great Swin Cash by retiring her No. 32 in the rafters of Gampel. Cash and Rebecca Lobo (No. 50) are the only former UConn basketball players to have their numbers retired, joining Ray Allen (No. 34) as the only numbers hanging in Gampel.

For the first time this season, all 10 active players were available to the Huskies. Sophomore guard Caroline Ducharme made her 2022-23 season debut on Monday after missing both the exhibition and the season opener last week due to a stiff neck. Ducharme, the first substitute on Monday, ended the game with two points in five minutes.

Texas (1-1) was without starting point guard Rori Harmon with a toe injury (Harmon sat on the bench in a boot on Monday). The Longhorns however; started former DePaul star Sonya Morris, who left in the third quarter of Friday’s Texas season opener with a back injury.

Azzi Fudd showed all night Monday that she’s just as strong in the arch. Fudd led by a career-high 32 points. She was followed by Aubrey Griffin with 14 points and Lou Lopez Senechal with 12 points. Junior point guard Nika Muhl ended her career with nine assists.

Griffin, who spent over 580 days between her last live game for UConn and this year’s season opener, was everywhere for UConn. Her first shot was an unguarded 3-pointer corner that resulted in a team-high 12 points at halftime. When Aaliyah Edwards missed a fastbreak layup, Aubrey Griffin was there to snatch the offensive rebound and get the ball back up and in the basket. As Fudd ran onto the court, even after a quick break, Griffin was behind her, arms outstretched, blocking any incoming defenders.

The Longhorns had no response to the Huskies’ fast breakkick. At the break, UConn had outplayed Texas 14-2 from quick breaks and had six steals to Texas’ 3.

But the game wasn’t that easy.

In the first half there were 11 lead changes and 7 draws. Each team had double-digit sales (Texas with 11 and UConn with 10). Texas pulled out their full-court press on UConn’s first offensive possession and never stopped.

Lou Lopez Senechal took a seat on the bench early in the second quarter after being called for her third personal foul (Edwards and Ayanna Patterson also had two each). Fudd ended the first half with a then-high of six turnovers.

But the Huskies took control and finished 42-37 at halftime with a 12-5 run – including Ducharme’s first points of the year. And Muhl’s 3-pointer corner midway through the third quarter boosted UConn by 11.

Gampel bounced when Fudds 3-pointer raised UConn by 16 at 6:42, forcing Texas to call a timeout. The sophomore came alive in the second half, scoring 20 of UConn’s 39 points combined in the third and fourth quarters. Her 3-pointer at the 1:57 mark in the fourth was the ultimate dagger in the Longhorns’ loss.

UConn will get its next big test on Sunday when it hosts NC State No. 10 at 1 p.m. at the XL Center.