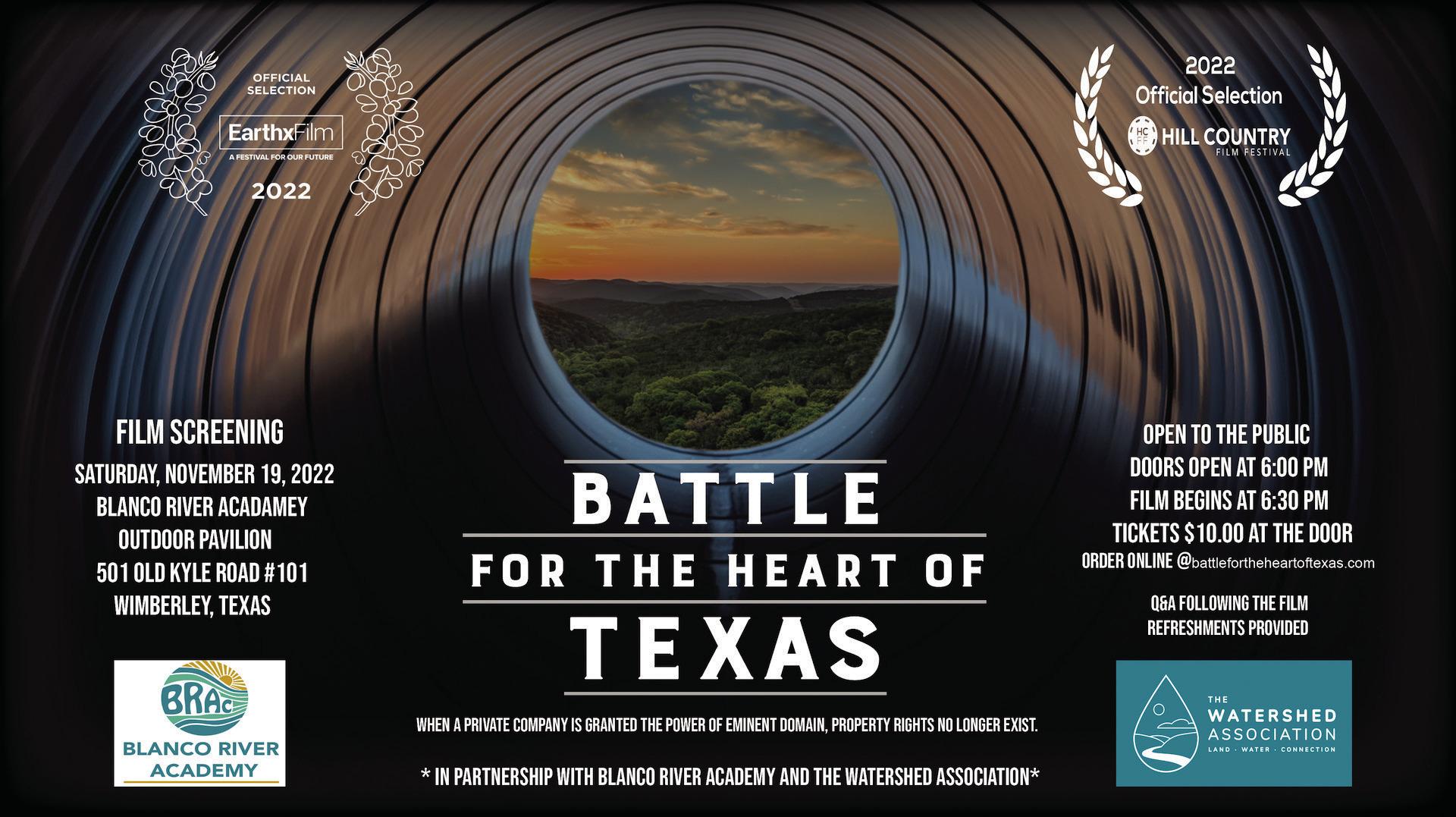 This Saturday, Wimberley hosts an impact screening of “Battle for the Heart of Texas,” a documentary detailing the hardships faced by Hill Country landowners in connection with the construction of the Permian Highway Pipeline.

At the heart of the matter is the use of outstanding government power by Kinder Morgan, a multi-billion dollar private company, to use land to build and lay a 42-inch natural gas pipeline that will traverse 430 miles of Texas north of Texas Fort Stockton through central Texas to destinations near Houston. Eminent Domain enables a government or its agents to lease or buy private land for public use, regardless of the opinion or consent of the landowners. “Many in Hays County — including families in and around Wimberley — are impacted by this pipeline,” said John Brown, a longtime Wimberley resident, project director and producer. “It’s important to share this in communities where this has happened or will continue to happen, to educate landowners about our rights and how each of us can influence significant domain reforms in the state capital.”

The film is the culmination of nearly five years of investigation and labor of love for Brown. He served as program director for KWVH (Wimberley Valley Radio) in its infancy and as a result produced or hosted numerous on-air shows including Wimberley on Mic. “We talked about politics and what was happening in the city. I was made aware of this issue when landowners contacted us and asked if we knew of a pipeline that runs through the area,” Brown said, adding, “The decision to replace one of the largest natural gas pipelines in the world with one of the greenest relocating vulnerable areas of Texas – areas responsible for providing drinking water to millions of people – stood out. I knew then that more than just a discussion had to take place. This had to be documented.”

Central Texas, including the Wimberley Valley, has experienced growth in recent years. Many residents, both new and those who have been here for generations, are relatively unaware of the circumstances surrounding the process and construction. “The film really puts into perspective what your friends and neighbors have been going through,” Brown said. “It’s an ongoing struggle. Many landowners have gone through the sentencing process, fought against this use of their land and have yet to have a day in court, even though the pipeline is in the ground and operating.” The demonstrations introduce the dilemmas and give viewers the opportunity to to discuss further after the film.

Brown’s local production company, Big Ingen, has partnered with Blanco River Academy and the Wimberley Valley Watershed Association to develop and bring together the project. The film has raised awareness on both sides of the political line, both of environmental impacts and of landowners’ rights. “This goes beyond the politics of both sides. In a state that places landowner rights and the defense of one’s property among its top priorities, the Texas government has failed to protect both landowner rights and the environmental interests of the public. This goes beyond partisan politics and rhetoric. Both sides are and should be concerned about the need for political reform,” commented Brown.

The screening will take place this Saturday, November 19th at 6:30pm at the Blanco River Academy Outdoor Pavilion, 501 Old Kyle Rd #101 in Wimberley. More information and tickets for the screening are available on the project’s website. Fight for the heart of Texas. com and links on their Battle for the Heart of Texas page on Facebook.