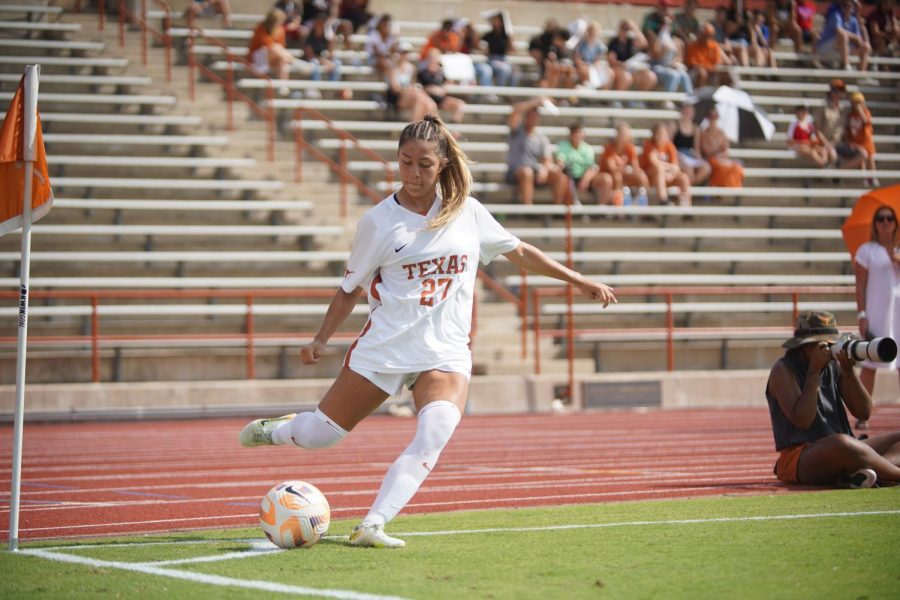 On a chilly Friday night in Austin, Texas, in front of 1,645 fans, football battled tooth and nail against legendary rivals Texas A&M. The Longhorns prevailed in a hard-fought match and advanced 3-1 to the second round.

No love was lost between the two teams. Although many of the players from both teams played in the Dallas area in their youth, the intensity on the field was consistently high and physical play was involved.

“There was a lot of tension even before the game, stuff was being posted, people were just feeding into it all,” said Ashlyn Miller, sophomore midfielder. “Before the game we had all this juice and energy and we just wanted to kill them. In the match it was exactly the same energy.”

Texas has been a momentum-based team all season, relying on early goals to spark an eventual offensive attack. Jilly Shimkin’s second midfielder in the 12th minute from a free kick gave the Longhorns all the cushion they needed to take more risks on the field and push the attack forward.

“Scoring the first (goal) was really important and we knew scoring the second was going to be even more important,” said head coach Angela Kelly. “At half-time I told them I didn’t think it was going to take just two, so we wanted to push for (the advantage).”

Despite the two-goal difference on the scoreboard, the game was much closer than the box score would suggest. At half-time, Texas A&M Texas led 4-3 overall and managed to keep goaltender Savannah Madden under pressure throughout the opening period. However, in the second half, the Longhorns overtook the Aggies 13-4 and took complete control of the game.

“We played mature, we played smart at moments,” Kelly said. “We could have made quicker decisions to give ourselves a little less stress … but this is a good opponent, a tough matchup from the NCAA and I think we had a good response.”

Texas’ attack, as it has been all season, was led by his group of Impact students. Shimkin, Miller, forward Trinity Byars and midfielder Lexi Missimo combined for all three goals and an assist, with Miller scoring her first goal in over a year and putting the nail in Texas A&M’s coffin. Second grade gave Kelly plenty to work with offensively, making it much easier for her to plan for success.

“I’ve played with Lexi and (Trinity Byars) my whole life, and then to add Jilly and Emma (Regan) into the mix is ​​just completely outrageous,” Miller said. “Our connection and what we have on the field is unbeatable.”

“I think (the win) gives us a little bit of confidence,” Miller said. “But I think we’re not very cocky, I think we’re very humble. … If anything, (this win) will (potentially) humiliate us more to play Duke.