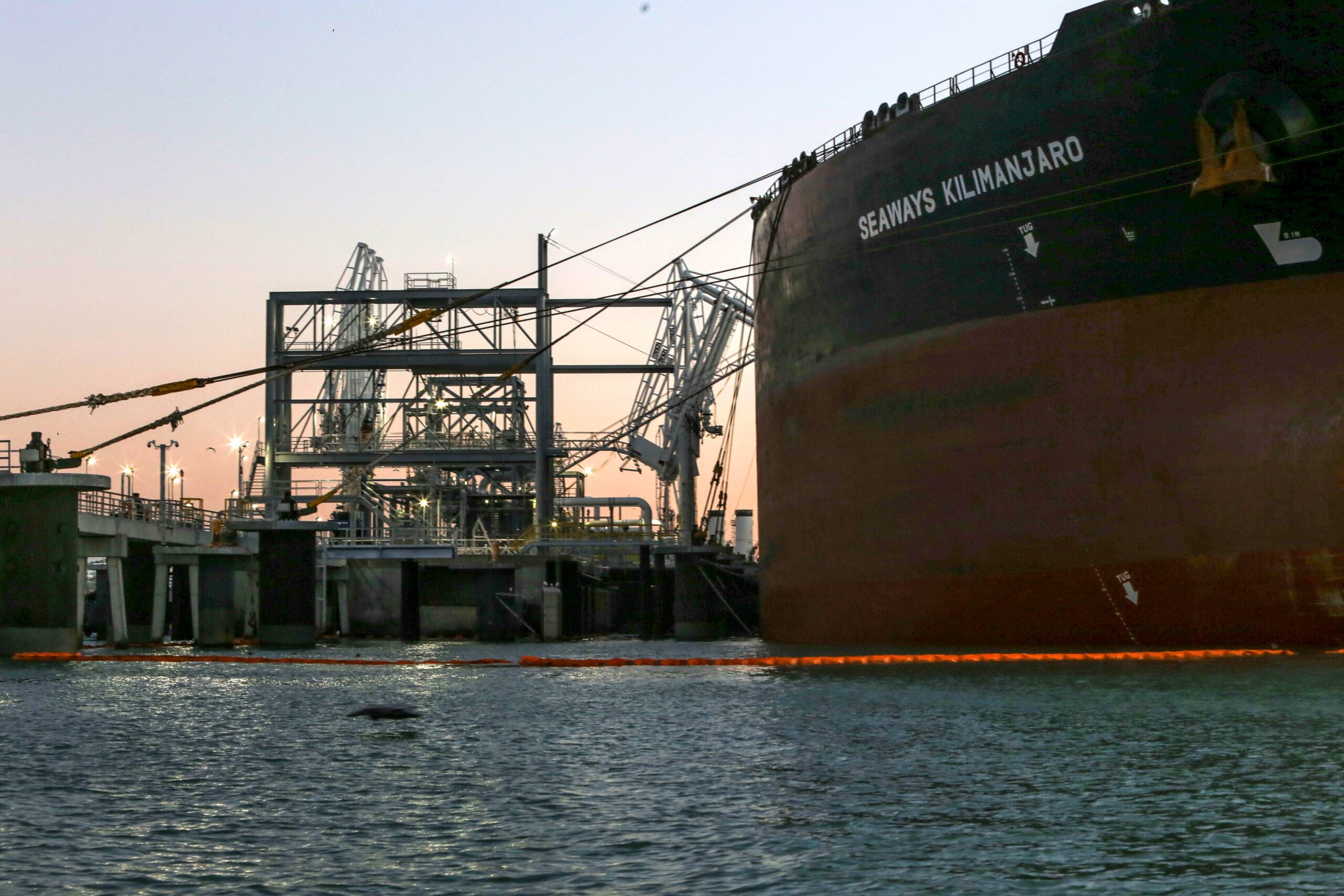 Four climate activists from Texas and Louisiana were arrested in Washington Wednesday morning after hosting a sit-in at the Department of Transportation that could decide on the first of four proposed offshore oil terminals in the Gulf of Mexico as early as next week.

Activists say the terminals, which are expected to add 6.5 million barrels a day to the country’s oil export capacity, would clash squarely with the Biden administration’s aggressive climate targets to reduce greenhouse gas emissions and enable decades of growth in US fossil fuel production .

“We are asking President Biden and [Transportation Secretary] Pete Buttigieg to get involved and be a climate leader and not approve this oil export project,” said Melanie Oldham, founder of Citizens for Clean Air & Clean Water of Freeport and Brazoria County, who traveled from Texas to attend the sit-in, but wasn’t there arrested. “We hope that they practice what they preach, what they have told us in their campaigns.”

Offshore terminals 30 miles into the Gulf would allow the world’s largest tankers to source oil directly from Texas, where oil exports have skyrocketed since Congress lifted an export ban in 2015. Currently, a lack of access to deep water is hampering export growth. Texas’ Permian Basin is setting records and prices are soaring, forcing smaller ships to laboriously haul oil from Texas coastal depots to larger ships waiting miles offshore.

The four proposed offshore terminals, all in Texas, would significantly increase capacity for the US oil industry, which hit its monthly export record of 3.8 million barrels per day in July.

Last month, the US Environmental Protection Agency quietly granted its first permit for one of the projects — the Sea Port Oil Terminal (SPOT), jointly developed by Enterprise, Enbridge and Chevron 30 miles off the coast of Freeport, Texas. The EPA’s action came after a three-year review that met with strong public opposition.

The Department of Transport’s Maritime Administration (MARAD) could announce its decision on the terminal as early as next week.

The contingent of activists from the Gulf Coast and beyond, some of whom intended to be arrested, saw Wednesday’s sit-in as a last-ditch effort to thwart the project.

“We will not leave until we hear that the Maritime Administration will not approve this project,” said Robin Schneider, Austin-based director of the Texas Campaign for the Environment, before her arrest Wednesday morning. In the evening, she and others were charged with illegal entry and released.

Growing oil production, Schneider said, contradicts commitments announced by Biden and Buttigieg to accelerate the transition away from fossil fuels.

The Maritime Administration’s 890-page statement, released in July, said the Sea Port Oil Terminal would produce greenhouse gas emissions equivalent to 233 million tons of carbon dioxide per year (about 4 percent of total US emissions in 2020). Meanwhile, the Biden administration promises a steep reduction in emissions over the next seven years.

During three public hearings over a three-year period, Oldham and other Gulf Coast activists asked regulators not to allow the seaport terminal near their community. According to Earthworks, which supported the campaign, more than 40,000 people submitted official comments against the project by the end of 2021.

On Oct. 5, Oldham gave a 20-minute PowerPoint presentation to the EPA in Dallas, in which she described her small town as constrained by oil projects and congested with pollution.

“We were shocked when the EPA released this statement,” said Oldham, a 63-year-old physical therapist from Freeport. “We just don’t get it.”

Though EPA’s letter of recommendation is dated Oct. 7, it took a month to appear online, leaving Oldham and other activists hastily arranging a last-minute trip to Washington before a final decision was made.

“I’m not sure why it’s taking so long for them to release these very important updates,” said Ethan Buckner, a senior manager at Earthworks, which sponsored travel expenses for some of the protesters. “We were not aware of the recommendation being made until last week.”

While supporting the seaport proposal, the EPA wrote that “more emphasis is needed to ensure that environmental justice and climate change considerations are included in the project to protect overburdened communities.”

The Maritime Authority’s impact statement said that consuming the oil the offshore terminal hoped to deliver by 2025 would have an annual “social cost” of up to $18 billion — global financial damage associated with it the impact of emissions on agricultural productivity, human health, biodiversity loss, extreme weather and sea level rise.

It also warned of significant impacts on coastal water supplies and aquatic ecosystems in the event of a spill.

A spokesman for Enterprise Products Partners, the parent company of the proposed terminal, declined to comment on the story. The EPA and the DOT’s shipping administration did not respond to requests for comment.

The EPA’s approval of the offshore terminal follows September’s rejection of a similar project, the Bluewater Texas terminal off the coast of Corpus Christi, where the agency ordered the project to reduce planned air pollution by 95 percent and reapply .

Support from environmental agencies gives the seaport terminal a clear lead in the race to build the Gulf’s first new offshore facility. The only Louisiana Offshore Oil Port operating today was built in the 1970s to import foreign crude oil, but its facilities were remodeled after the US export ban was lifted. According to the Global Energy Monitor, up to 150,000 barrels of oil per day can be processed there.

ICN offers award-winning free climate reporting and advertising. We depend on donations from readers like you to keep going.

A string of new coastal liquefied natural gas terminals are also being proposed between Louisiana and the Rio Grande — a parallel attempt to export the other bounty of Texas’ fracking boom, methane gas.

EPA’s endorsement of the seaport terminal said the agency will “pull every lever to make tangible advances in justice, environmental justice and civil rights while providing immediate assistance to local communities.”

“Historically, facilities have been erected, expanded and the pollution burden increased in already vulnerable communities,” it said.

The statements ring hollow to Gulf Coast advocates, who for years have told federal authorities that existing pollution in their communities meant the terminal should be rejected.

Every year since 1992, the EPA has rated Brazoria County as “severe” or “severe” violations of federal ozone standards.

BASF, the world’s largest chemical producer, operates a complex with 26 plants in Freeport. Dow Chemical calls its local site “the largest integrated chemical manufacturing facility in the western hemisphere.” (Environment America this year named it the nation’s second-biggest water polluter and number one in Texas.)

All of this in a city of 10,600 where non-Hispanic whites make up just 16 percent of the total population, compared to 40 percent in Texas as a whole, and Hispanics make up 64 percent.

If fossil-fuel projects really created prosperity, as officials often claim, Oldham said, Freeport would have seen it by now. Instead, the small town, flanked by big industry, has a poverty rate of 26 percent – compared to 14 percent in Texas as a whole.

“As far as I know, it will not benefit our community in any way,” Oldham said of the proposed offshore terminal. “All that will benefit from this are Chevron, Enbridge and Enterprise.”

Dylan Baddour reports on the energy sector and environmental justice in Texas. A Houston native, he worked in the business department of the Houston Chronicle, covered the US-Mexico border for international media, and for several years reported from Colombia for media outlets including The Washington Post, BBC News and The Atlantic. He also spent two years investigating armed groups in Latin America for Facebook’s global security division before returning to Texas journalism. Baddour holds a bachelor’s degree in Journalism and Latin American Studies from the University of Texas at Austin. He has lived in Argentina, Kazakhstan and Colombia and is fluent in Spanish.