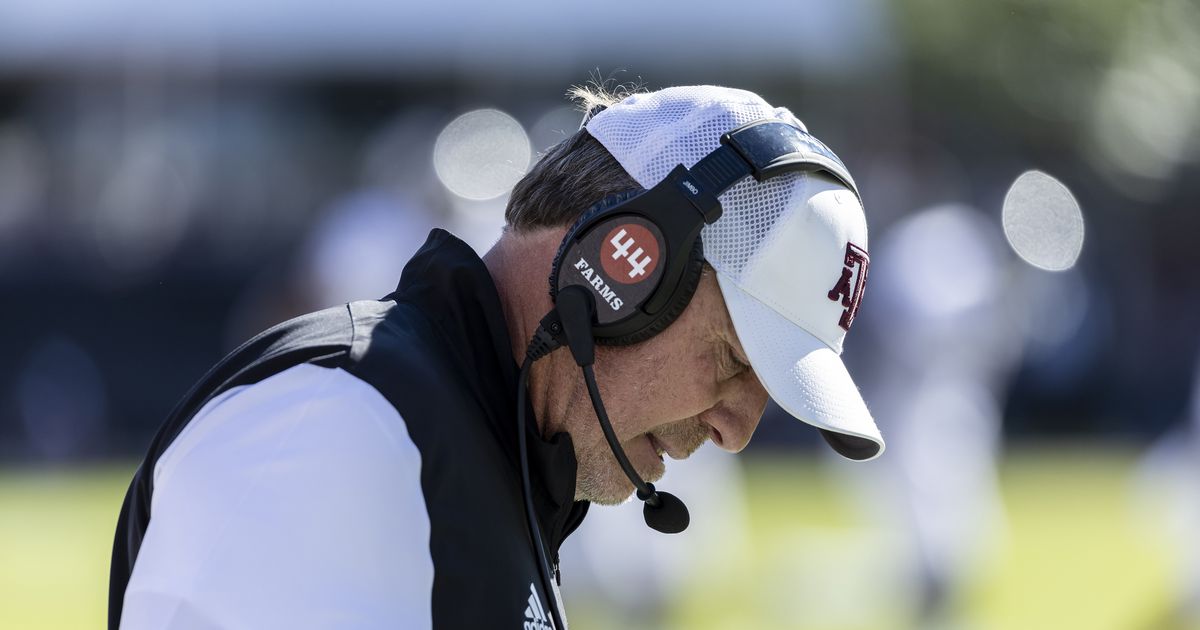 A sure-fire sign that a season hasn’t lived up to expectations is when the manager has to deny that it’s all become a hot mess.

Engaged in Texas A&M’s longest losing streak in 50 years and without a bowl appearance, coach Jimbo Fisher denies the perception — despite ample evidence to the contrary.

“It’s not out of order,” Fisher said during his weekly press conference Monday afternoon. “We have very good players here. We have good guys that we will continue to coach, good young players. …

We will see. During a 3-7 season, five of the losses have come about by a point count.

“Is it far away?” asked Fisher rhetorically. “It may be, but it’s also very close. It’s not like it’s unattainable.”

The present isn’t exactly the picture of glory days, despite narrow losses. Fisher, the $95 million man with an $85.95 million buyout, is making Aggies actually miss the Kevin Sumlin era. Even a victory over UMass on Saturday is hardly registered.

If you recall, A&M started the season sixth on the AP Top 25, a notable drop.

Even before that, there were all sorts of incidents that should have set off alarm bells and sirens. Here’s a look at how things unraveled:

— The end of the 2021 season. The whole thing was glossed over when Texas A&M signed the nation’s No. 1 recruiting class in December, but things just didn’t end well. A&M dropped its last two games against FBS opponents, including an inexcusable lead against LSU. Then the Aggies opted out of the bowl with a depleted roster. The momentum towards 2022 has slowed.

— Unreasonably high expectations. While no one was counting on 3-7 after 10 games, a No. 6 preseason ranking looks almost delusional in hindsight. A&M had nagging question marks at quarterback, offensive line, receiver and defensive line after an 8-4 season. Even with Recruitment Class #1, history said immediate help is unlikely to come from true newbies picking their way.

— Coaching of music chairs. Fisher revealed new assignments for offense coaches Darrell Dickey, Dameyun Craig and James Colley early in preseason camp. Yes, it was strange for changes at this point. “We mixed it up in different ways,” Fisher said, downplaying the news at the time. In retrospect, it might have shown that something was wrong with the offensive.

– Appalachian State. It wasn’t just the 17-14 loss to a group of five school, it was everything around them. As their current 5-5 record shows, the Mountaineers weren’t powerhouses. They still dominated A&M far more than stated, doubling aggies in possession time and plays. To call it humiliating was an understatement.

– Discipline. Four freshmen were suspended over an incident before the Miami (Fla.) win in September and four others over a reported locker room incident following a loss to South Carolina last month. Accountability ranged from the lax for incidents involving the police to the odd, like moose Muhammad III being benched for wearing sleeves against Auburn.

– injuries. From quarterback to offensive line to defense, the Aggies have seen more than their share. Perhaps the biggest injury suffered was Ainias Smith, who was lost for the season with a right leg injury sustained against Arkansas in September. While Smith was A&M’s top receiver and a multi-talent, he was also a key figure in the dressing room.

— The offensive. Yes, the crime. Did we mention the offense? If there’s one primary reason A&M is buried in the SEC rankings, it’s crime. The Aggies are last in the SEC on scoring (21 points per game) and second-bottom on overall offense (350.7 yards per game) and pass efficiency ratings. You can factor into the equation the quarterback uncertainty and inconsistency that Haynes, Max Johnson and freshman Conner Weigman all have a chance to start with mixed results. Whether by choice or by strong suggestion, Fisher is likely to hire a true offensive coordinator and relinquish his play-calling duties during the offseason. But how much will the offense seriously change.

— The running defense. Some wondered when defensive coordinator Mike Elko left to coach at Duke after four successful seasons. Now he’s entitled the Blue Devils 7-3 and Bowl. Backup DJ Durkin set up an OK defense that failed to stop the run. A&M allows 221.5 yards per play and almost 5.0 yards per rush. It also got worse as the season progressed, allowing for an average of 319.3 yards in the last three games. Blame the youth or the injuries, but getting hurt on the ground isn’t a winning formula in the SEC.