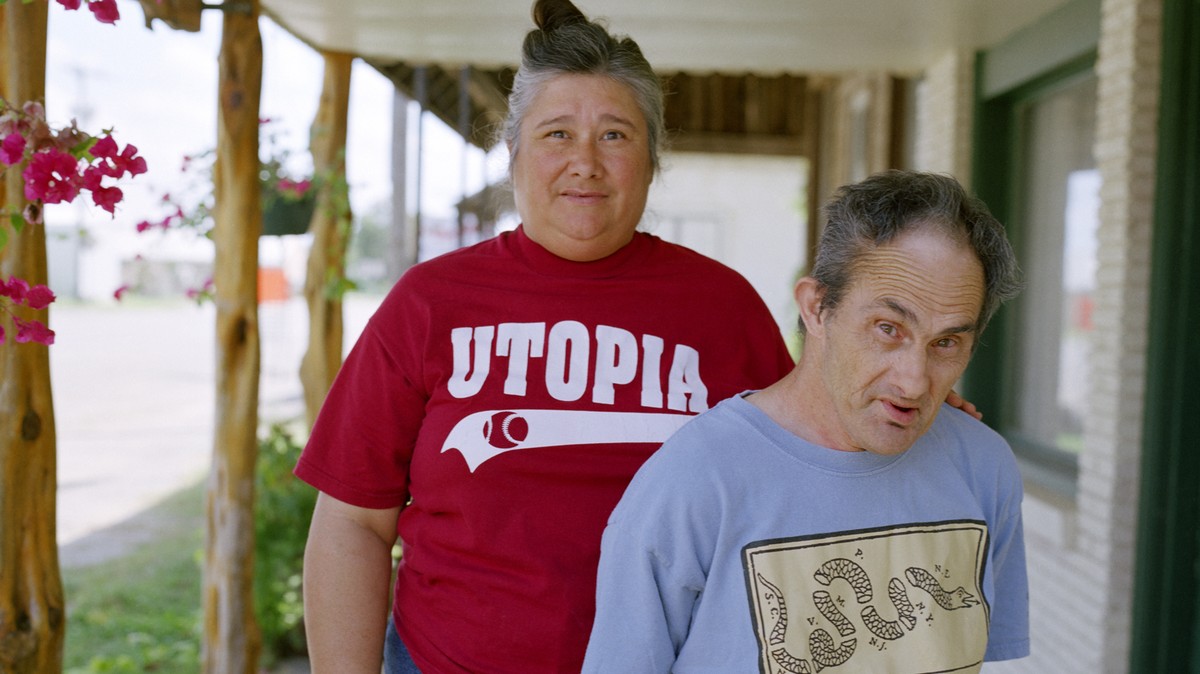 “How many American movies had I seen when I came to Texas? Thousands,” says British photographer Edward Thompson, recalling how much his relationship with the country had been purely visual long before he arrived. He’d been to New York a few times to visit his late father, but Texas was a different world. And it was his interest in cinema that really sparked his initial fascination with the Lone Star State.

“It was a surreal experience,” he adds. “Because so much of the language, the lexicon, the iconography… I knew it.” After traveling to Texas in his mid-20s, Thompson spent 2006 and 2007 photographing his surroundings. This work would eventually become The Texas Hill Countrya new book he recently crowdfunded on Kickstarter.

Inspired by his heroes Diane Arbus and Joel Sternfeld, Thompson’s photographs, shot in pre-Obama Texas and before the financial crash, attempt to subvert reality. Documenting roadside signs, Veterans Day celebrations, and run-down homes, each photo brings the surrealism of pedestrian streets to the surface. Some of his photos are strangely predictive. In one, he captures a truck covered in homemade signs that hint at the Trump administration’s anti-immigration rhetoric that would follow a decade later.

Now, 15 years into his career, Thompson has received a Sony World Photography Award, lectured at the V&A Museum and self-published a number of personal projects, including 2012 occupy London and In-A-Gadda-Da-England, which came out earlier this year. “My last book was all about what fueled Brexit – the weaponization of nostalgia, severity and class,” he says. “And with this book, it was like, ‘When I saw this truck…'”

Here’s what Thompson had to say when we spoke to him.

VICE: What originally inspired you to travel to America and specifically the South?
Edward Thompson: We were shown a lot of conceptual photography when I was in college, but I stumbled across a book by Diane Arbus and was blown away. I’ve always been a film buff and it was so incredibly surreal and cinematic, her work, yet it was documentary. That drew me to Joel Sternfelds American Perspectives. I fell in love with these two American photographers, and then family friends were in Texas, so I had an invite. I knew if I could get there I would have a place to stay.

And how did the first trip in 2006 come about?
There was a master’s degree at the LCC [London College of Communication], taught by Paul Lowe. I wasn’t ready yet but my friend did so I found out what the projects were [before starting]. There was this big project, so I said fuck it, I’ll start now. It was my version of The European Photographer goes to America that we watched over and over again. But this was my chance, my first last chance.

I came to Texas in 2006, but I wasn’t really equipped to work as a photojournalist. I returned in 2007. I couldn’t afford a direct flight, so I took 48 hours non-stop from New York on Greyhound buses, which was a nightmare. But I’ve read Neil Gaiman’s American gods, which helped me keep my shit together. I got an award for the work, but that was among other things in life and it was just in a box in different houses.

They shot for three months over a two year period. How has your perspective of the place changed?
It wasn’t like in my head – oil wells and cowboys. It was a lot more hills and grasslands. Just a huge landscape. It was a weird paradigm shift going there – it’s cinematic but a bit dangerous because everyone has guns.

[At university] We had to do risk assessments and I said, “Dude, I’m only going to America,” but my tutor said, “Ed, where you’re going, there are more guns than anywhere else.” I was so naive, but I guess naivety is a quite powerful tool and maybe I wouldn’t have gotten the photos I took.

As an outsider, can you share your experience of taking photos?
I learned how to work as a photographer. There was a woman who lost her mother, she was upset and all these women gave her a massive hug. I was on a balcony and could have taken this amazing shot but it didn’t feel right. On the next trip I saw them and got some great shots at their ranch. So I got good at reading a moment where it’s broad enough or it’s an event and people expect photographers.

I would talk to people on the street because I wanted to have a nice moment – if you stop a stranger who isn’t used to being photographed, they get stuck, it shows, they’re awkward. The most important thing for me was that I’m enthusiastic and talkative. People quickly realized that I was English too, which sometimes helped, sometimes not.

You were filming during the George Bush administration, just as Obama was announcing his presidential candidacy and the financial crash was taking place. How politically active were you at the time?
That was a massive pull factor, I mean George Bush’s Western White House was in the Texan Hill Country. I once went to this arms fair and saw this truck with homemade signs: “Rome destroyed by liberals, illegal immigrants and terrorists” and “No amnesty for illegals”. Then, as he walks through the show, a guy buys the rifle he used in Vietnam – my only two shots that day. I see him in another city and it was just his TRUCK.

It was 2006, the year Twitter was invented, but its truck was its Twitter. When I saw that truck back then, I was like, ‘Huh, that’s a funny guy,’ then Trump gets elected and you’re like, ‘Wow, there is a lot of by guys.” When Obama was President, there was a ripple, I looked at the work and I was like, “Oh, history.” But with the rise of the right around the world, that’s not history.

The Texas Hill Country is available to pre-order now here.