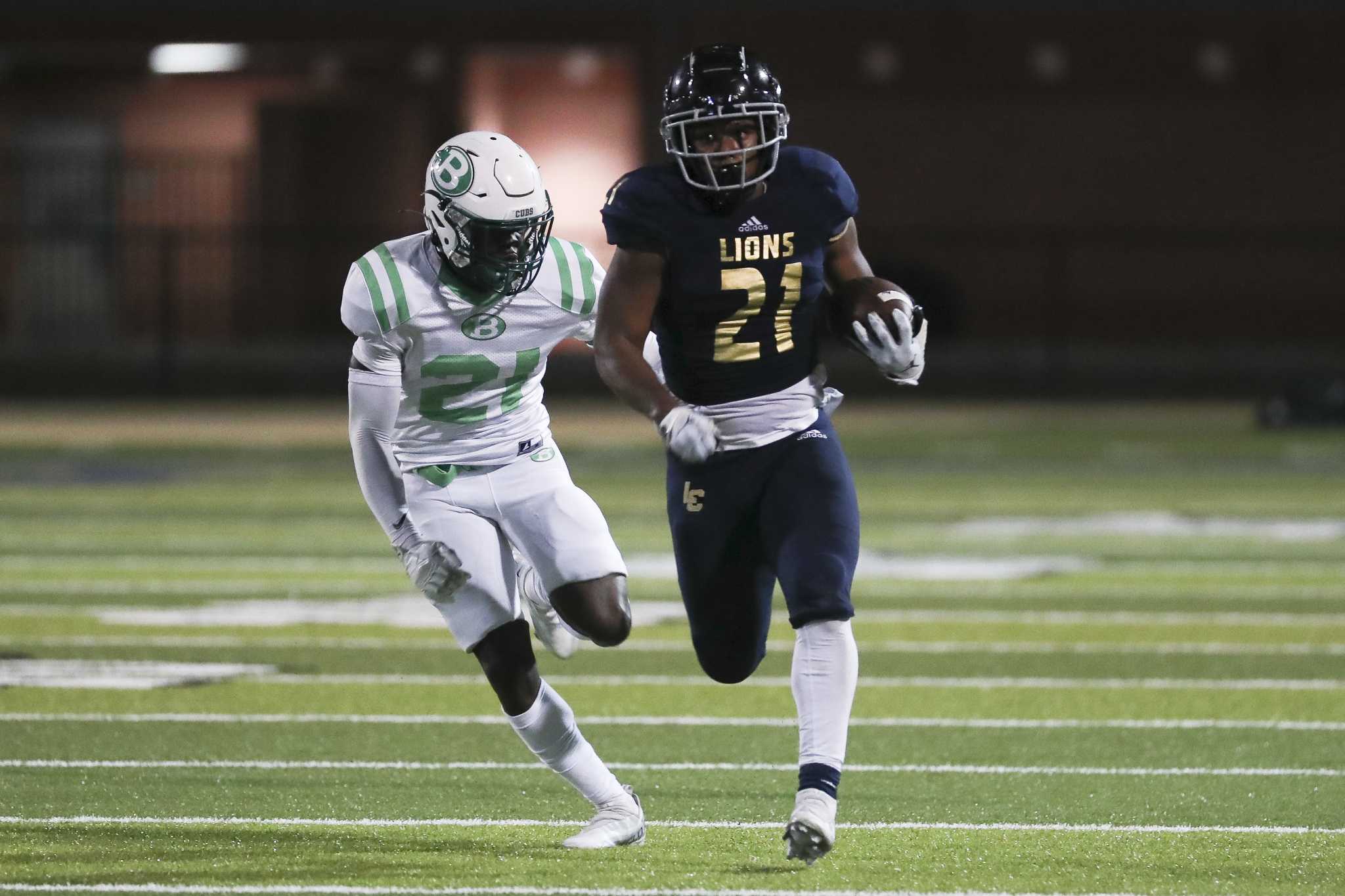 MONTGOMERY — The Lake Creek Lions are adding more and more to the history books as the weeks go by.

After winning the District 10 5A (Div II) title last week at their home field, Montgomery ISD Stadium…why not up the ante?

The 5th-ranked Lions defeated Texas City, 25-7 in the two-district round Region III-5A on a cold, rainy, and windy night.

“I’m just so proud of these kids,” said Pat Kennedy, Lake Creek coach who has led the program since Day 1. “These seniors are now 11-0 going into the second round. I just couldn’t be prouder.”

The rain picked up during the national anthem and lasted only a few minutes. But the cold and wind lingered, making for a perfect night for the Lions (11-0) to run the ball against the Stingarees (6-5).

“Especially because it was raining,” said Lions second-running back Tyvonn Byars, who rushed for over 200 yards and had three touchdowns. “It’s quite difficult to catch the ball when it’s raining.”

The first quarter was plagued with distractions for a team so excited and looking forward to hosting their first playoff game.

The weather played a role, but then a malfunction of the game clock on the scoreboard delayed the game by a few minutes. Until the clock started working again in the second quarter, the officials on the pitch kept the time down.

“It was kind of weird and different,” Byars said. “But the coach is just telling us to adapt to things. Just adjust and keep playing.”

Those early distractions? Lake Creek played them through.

It was raining, the game clock malfunctioned, and the game speed slowed down early.

But Byars was not slowed down by anyone. The second sensation ran for touchdowns of 33 and 16 yards in the first quarter. The Lions didn’t convert to the point after either run for a 12-0 game.

At the 11:12 mark of the second quarter, Byars then scored again from 19 meters away.

Alex Abbott made it 22-0 at halftime after a 20-yard field goal.

The Lions got a late stop on a Stingaree pass into the end zone to take the shutout at halftime.

“I tell them all the time to cut the noise, cut the distractions,” Kennedy said. “They make revenue there (in the first) quarter and go up a few points. Goed into half time 22-0 and got the stops they needed.”

Texas City scored their only touchdown of the game at 1:46 in the third quarter. It came from a Lake Creek fumble and touchback. The Stingarees rushed for 75 yards and Caleb Bell capped it with a four-yard run.

The Lions’ only points of the second half came at the 10-13 mark of the fourth quarter when Abbott hit a 19-yard field goal.

Lake Creek’s first playoff experience two years ago was unmemorable when he advanced to Texas High in Texarkana and dropped 30 points.

This victory will certainly be remembered by the Lions and their coaching staff.

Lake Creek put in a strong defensive performance with 267 yards that carried the momentum into the next week.

Texas City finishes the year 1-3 in road games this season.

“I’m just so proud to be part of this team,” says Byars. “We’re going into the second round to make history. It just feels so good to be making history.”