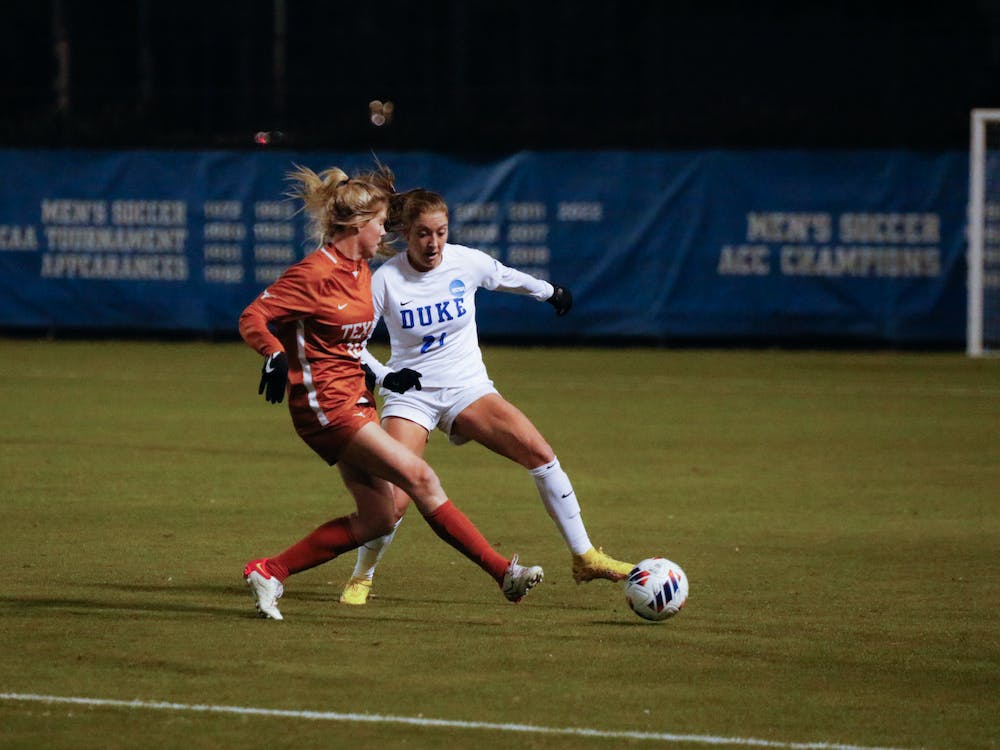 Duke needed 20 shots to get on the board against Texas. And now it’s still more than 20 years since the Longhorns last won against the Blue Devils.

Junior defender Katie Groff’s header from an 88th-minute corner gave Duke a 1-0 win over Texas in the second round of Friday night’s NCAA tournament at Koskinen Stadium. The serve – Duke’s ninth corner of the night – came from midfielder Mackenzie Pluck, who sent a high swing to the far post. Groff, waiting right at the corner of the six-yard box, snuck up behind a small group of Longhorn defenders and sent the ball into the far corner of the net.

“We mentioned it [Pluck] and talked to each other about, ‘Let’s find the downside, let’s get over it,'” Groff said after the game. “Sometimes it swings in more, but we were like, ‘Let’s cross it over and play it so I can get it,’ because I’ve scored with that type of serve before.”

“This is a very talented team, and [for Texas] To have a zero on the scoreboard is just great for our group,” said head coach Robbie Church.

After 20 shots throughout the evening, including five on target, the finish was certainly a relief for Duke, especially after two brawls that gave the Blue Devils multiple chances to get on the board. Duke’s greatest first-half scoring opportunity came in the seventh minute when trained midfielder Delaney Graham brought the ball in from the right corner flag and found Pluck’s head, rousing the fans to their feet. Pluck’s header was deflected by Longhorn goaltender Savannah Madden and her follow-up attempt hit the bar. The third attempt, this time from newcomer striker Kat Rader, was just over the bar and elicited a collective exhale of frustration from the Blue Devil supporters.

As in Saturday’s win over Radford, Duke again needed time to adjust to a defensive scheme that limited his primary options, second striker Michelle Cooper and Rader. Texas packed its players in the middle of the field — five were in the box when Graham carried the ball down the left side of the field — doubling down on Cooper’s coverage, slowing Duke’s transition offense and letting most of Duke’s early shots deflect from players in burned orange jerseys.

“I think we started a bit slow. We couldn’t find a rhythm for the first 10 to 15 minutes. But once we started to find our rhythm, I found we played really well; we controlled the game,” Church said.

Cooper retired to more of a midfielder role in the second half to give the offense a different look, Church explained, although he noted she wasn’t quite used to the position. Junior midfielder Olivia Migli threatened down the left touchline to support several offensive runs in the second half. Junior midfielder Grace Watkins fell after an encounter with a Longhorn defender, which Migli recovered and sent into the net, although she was quickly saved by Madden before a Duke player could turn it into a goal.

The name of the game for Duke’s defense was to stop second forward Trinity Byars, who is fifth in the nation with 17 goals this season. That responsibility was led by sisters Emily and Jenna Royson, who split reporting on Byars. The closer sister would tag her while the other would cover and fill in the centre-back position.

“Our defense plan was to know the general area [Byars and sophomore midfielder Lexi Missimo] would be and to make sure we have a player up front; If they had two, we had three, and if they had one, we had two,” said Emily Royson. “My sister and I did a great job being the two to cover – one mark, one cover – and then back off [Groff or Maggie Graham] to help us.”

Both teams seemed impatient with the game’s goalless state going into the 87th minute. For Duke, that manifested as he fired multiple shots wide – particularly for Cooper, who opened the second half with multiple shots well beyond the box – while Texas struggled to control offensive runs during the change and settled into the secured six offside positions in the 90 minutes.

The highlight of the second half came when Pluck fought a Longhorn defender for possession at the goal line and emerged victorious 1-on-1. Her serve created another barrage of deflected shots for Duke, first from veteran midfielder Sophie Jones, whose attempt was pursued by Maggie Graham and deflected behind the goal line – the ensuing corner kick would be Duke’s game-winning game.

“We had a great season,” Texas head coach Angela Kelly said after the game. “…I’m just proud of the team. It was a back-and-forth match and it was meant to be a tactical chess match.”

Duke will be home on Sunday for the 6 p.m. Sweet 16 game against South Carolina

Get The Chronicle straight to your inbox

Sign up for our weekly newsletter. Cancellable at any time.

Leah Boyd is a Pratt Sr. and Social Chair of Volume 118 of The Chronicle. She was previously the editor-in-chief of Volume 117.