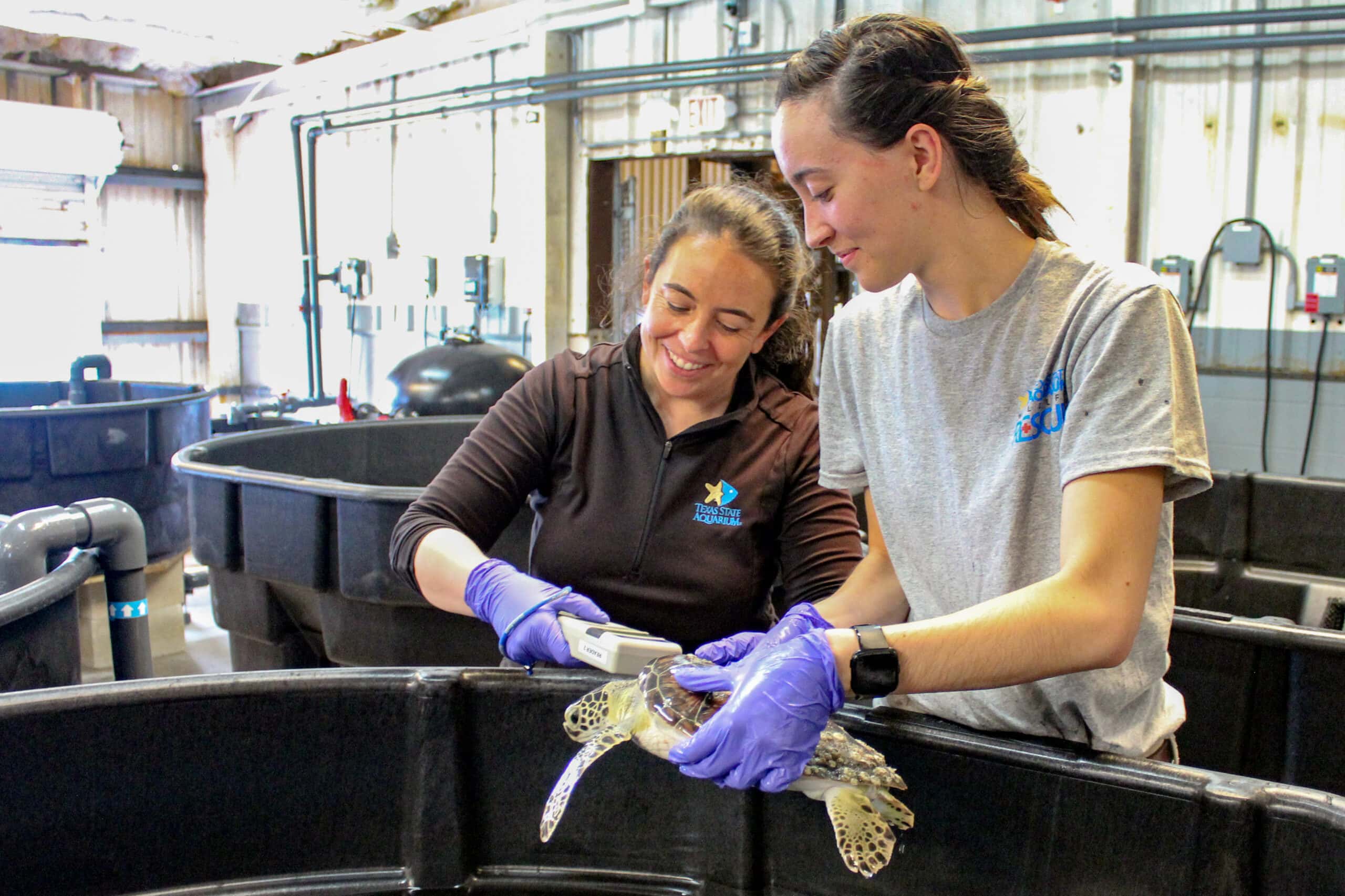 CORPUS CHRISTI, TEXAS – The Texas State Aquarium (TSA) set up emergency shelters to care for scores of stranded loggerhead turtles in south Texas. Due to the large number of sea turtles in need of rescue, the aquarium, for the first time in its rescue history, activated an unprecedented contingency plan and moved its sea turtle rescue operations to a Port of Corpus Christi-owned building 1 mile away from the current rescue center.

As of July, the aquarium has cared for more than 40 loggerhead turtles and is currently home to 27 large loggerhead turtles that were translocated to its rescue program from other rescue organizations in the area. Each of these sea turtles weighs around 150 to 200 pounds and were either injured or found with signs of illness or abnormal behavior.

“The US Fish and Wildlife Service is grateful to the Texas State Aquarium and Port of Corpus Christi for quickly coming up with a creative solution,” said Mary Kay Skoruppa, US Fish and Wildlife Service sea turtle coordinator for Texas. “With approximately 125 sick loggerheads in need of care in Texas since April, our partner rehabilitation facilities are nearing capacity. Without the prompt intervention of the aquarium and port, we would have faced the transport of loggerhead turtles to out-of-state facilities, a costly operation that would have put additional strain on the turtles.”

The number of loggerhead turtles cared for at the aquarium exceeded the available space and capacity previously allocated for this effort. Since April, more than 400 loggerhead strandings have been recorded in Texas, about three times the number for the region each year. Affected tortoises were underweight or emaciated, and an underlying cause was not identified. In July, the TSA Wildlife Rescue Center received 17 loggerhead turtles from the UT Marine Science Institute’s (ARK) Amos Rehabilitation Keep – ARK in Port Aransas, Texas. First, the aquarium modified the current Wildlife Rescue Center’s pool to accommodate as many loggerhead turtles as possible. More sea turtles arrived in September and due to limited space at the current sanctuary, 13 patients were transported to the aquarium’s main campus.

To make room for the sea turtles to be rehabilitated, rescuers converted a levee flood control system originally designed to protect the facility from hurricane flooding into a sea turtle habitat. Loggerhead turtles are aggressive towards each other and need to be housed in separate rooms to stay safe. Due to the size and space required for each sea turtle, the aquarium customized the flood control system into two 20-foot x 70-foot tanks, each accommodating up to 24 sea turtles. The rescue team used partitions to create individual areas of approximately 60 square feet per sea turtle.

In mid-September, representatives from the US Fish and Wildlife Service, Padre Island National Seashore, and NOAA Fisheries contacted the aquarium, requesting that more stranded loggerhead turtles need to be relocated to the aquarium from other rehabilitation facilities. By this point, the Aquarium ran out of space and reached out to the Port of Corpus Christi, which immediately leased a 26,000-square-foot building known as the Striker Building to the Aquarium.

On September 29, 2022, aquarium operations and rescue workers began setting up levee flood control systems that hold approximately 40,000 gallons of water in the Striker Building to house all of the sea turtles. On October 13, 2022, the aquarium’s rescue team moved all rescued loggerheads from the aquarium’s current rescue center and main campus to the Striker building.

“The unique ability of the Aquarium’s Wildlife Rescue Team to adapt and respond to emergencies of this magnitude is remarkable,” said Jesse Gilbert, President and Chief Executive Officer of the Texas State Aquarium. “We’re glad we were able to support our partners at the US Fish and Wildlife Service and NOAA Fisheries in the care and shelter of this endangered species, and we can’t wait to see these sea turtles swim into the Gulf and continue their journey in life.” “

To date, the aquarium has released 12 rehabilitated loggerhead turtles and will continue to rehabilitate and care for the remaining turtles until they are healthy enough to be released back into the Gulf of Mexico. This unusual sea turtle stranding event demonstrates the importance of having an adequate space to respond to wildlife emergencies of this species. The 26,000-square-foot new Port of Corpus Christi Wildlife Rescue Center at the Texas State Aquarium will be critical to wildlife conservation efforts and increase the aquarium’s wildlife rescue and response capacity. The new center is scheduled to open to the public in early March 2023.