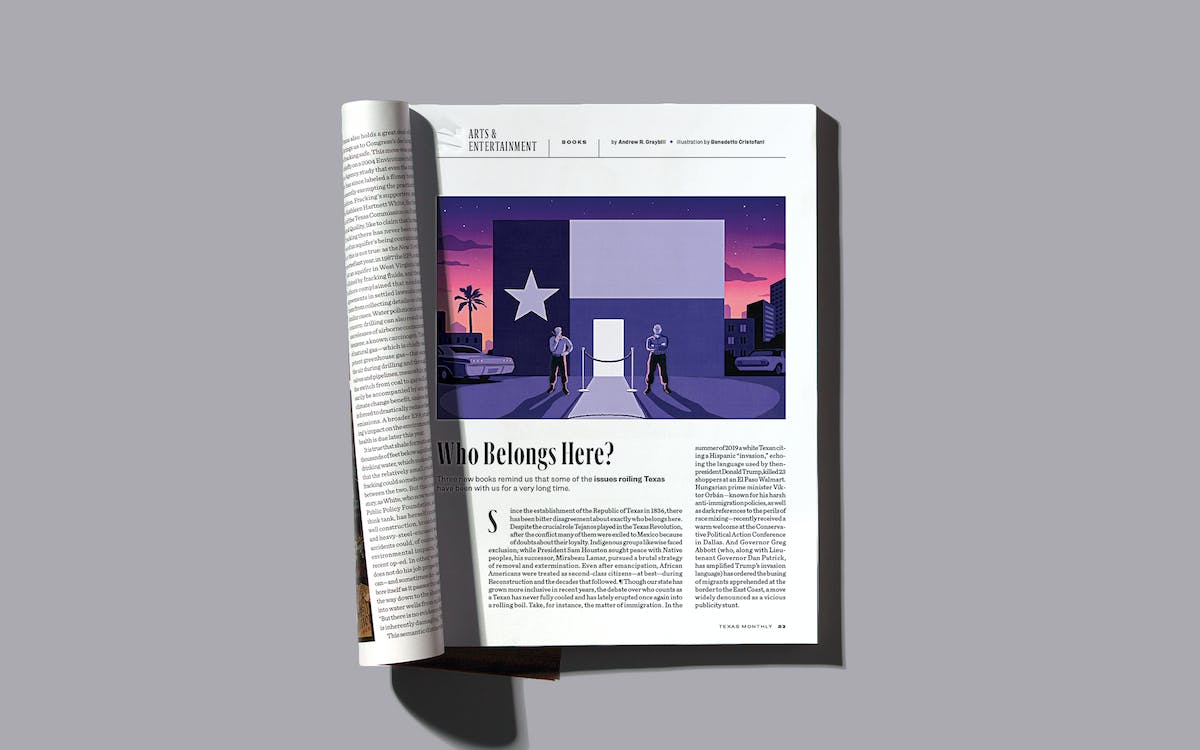 I was excited to see the history of the roadside attraction [“Pull Over!,” October 2022], and it did not disappoint. I loved the article except that the artist responsible for Barbadilla is not an “unknown” Texan artist but is actually a well known, loved and fun sculptor named Joe Barrington from Throckmorton. Making giant armadillos is no small feat. Their transport leads to hilarious stories. At the very least, I hope you give him credit for his creation. You wouldn’t be disappointed if you looked it up and found out what has to do with the manufacture and transportation of giant armadillos, old pickup truck-mounted catfish, and other Texas animals.
Marie Park, Dallas

Editor’s note: Calling the creator of Barbadilla “unknown” was actually a mistake. Kudos to the artist, Mr. Barrington.

I’m sure the statue of Tex Randall that graced your cover warmed the hearts of your readers. My aunt, Rhonda Timmons, is the artist who spent dozens of hours – 62, to be exact – bringing it back to life after years of neglect. Rhonda has been an artist all her life and her work has graced screens across this great state, although Tex is undoubtedly the greatest. Her art is part of my earliest memories: a border for my bedroom walls, a mural in my Sunday school classroom, Christmas cards, and the welcome sign at my wedding. It is a pleasure to see her talent reach your readers and I thought they might like to know her name.
Ashley Gil, New home

I enjoyed the impressive writing in your October 2022 issue, except for the book review by Andrew Graybill [“Who Belongs Here?”]. It was hard to get a feel for the books considering the reviews were embedded in somber opinions of Texas society.
Lloyd Lavender, San Angelo

Thank you for your reminder of Paul Burka [“The Great Paul Burka,” October 2022], whom I met at my first job in the 1970s, working for Texas State Senator Tom Creighton. I had just sent an impassioned letter to [founding editor] Bill Broyles is looking for a job with the newly minted Texas Monthly and had received an order from him which he (fortunately) did not publish. Burka then stopped by the senator’s office to meet this brazen guy whose article was rejected. I remember Burqa as a disheveled, affable guy, and I immediately liked him. After that we saw each other often in the Capitol. The article captured his spirit and contribution to Texas citizenship and politics.
spider Johnson, mason

Editor’s note: An article in our November 2022 issue, “Sold Out!”, contained an inaccurate description of a proposed whiskey collaboration between Frontier Spirits CEO Stewart Skloss and Luckenbach Texas Inc. The agreement would not necessarily have been illegal and no business agreement became ever formalized.

This article originally appeared in the December 2022 issue of Texas Monthly with the caption “Roar of the Crowd”. Subscribe today.