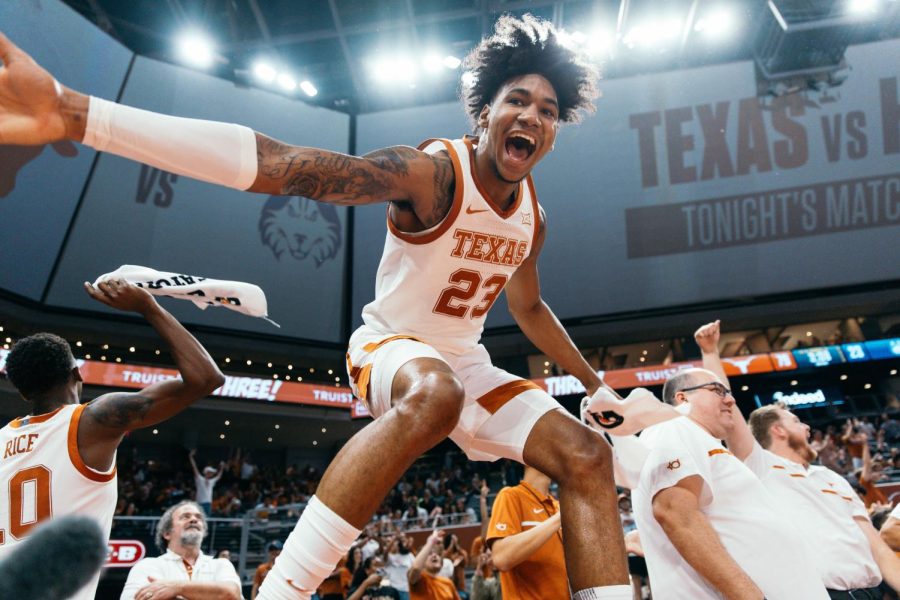 The No. 12 Texas men’s basketball team defeated Houston Christian 82-31 Thursday night. The win put the Longhorns 2-0 up for the season. Here are five takeaways from the game:

Tyrese Hunter picks up where he left off

Sophomore transfer Tyrese Hunter won Big 12 Freshman of the Year with Iowa State last season and helped lead his team to the Sweet 16.

After 18 points in a 6-of-8 shooting against UTEP in the season opener, Hunter continued that performance on Thursday with 10 points. He also had the most assists with three. The 6-foot guard leads the team in the first two games with 14 points per game.

Texas improved their rebounding a lot, especially on the offensive end

The Longhorns were passed in their win over the Miners on Monday night, but Texas didn’t let that happen tonight. Freshman forward Dillon Mitchell led the team with 12 rebounds, senior Timmy Allen finished with 10, and Hunter contributed 7 of his own.

“We want to be one of the top teams in the country to bring down the board,” Mitchell said. “That was a big emphasis on what we wanted to do.”

In the first half, the Longhorns held the rebound advantage by a 29-12 lead, thanks in large part to their ability to destroy the offensive glass. Mitchell had nine offensive rebounds by the end of the first half and scored a three within 30 seconds at one point.

The team eventually overtook the Huskies 56-33.

Poor shooting from the 3 point and free throw lines

Despite winning 51, Texas struggled with the charity streak and from deep. The Longhorns finished the tournament with just a 13.6% shot percentage from the 3-point line.

Though Texas often got to the line, the Longhorns couldn’t make the most of their trips, going 9-for-19 from the strip.

Defense continues to be a big focus for Beard

Coming to Austin, Beard spoke about the importance of playing hard defensively. The team apparently took that message and paid off on Thursday.

“Defense is the standard,” Beard said. “It’s the thing that never goes away.”

Houston Christian’s first goal came at 13:17 in the first half after Texas had already established a significant lead. The Huskies finished the game with 21 turnovers, which the Longhorns converted to 32 points.

The team defended at a high level and committed very few fouls; the first against Texas came at 12:06 in the first half.

Texas got minutes for the deeper bench players

As the lead for the Longhorns grew, Beard made changes to a couple of unfamiliar faces, redshirt rookies Gavin Perryman and Cole Bott, and rookie Alex Anamekwe. The trio combined for 29 minutes, including some momentous ones in the first half.

Anamekwe did a bit of everything, finishing with two points, two rebounds and a steal. Perryman and Bott both sank 3-pointers late in the second half, combining two of Texas’ three deep shots.

The Longhorns’ next game is Wednesday, November 16 at the Moody Center against Gonzaga. It will be the side’s biggest game this season and Beard said he knew what the side needed to do to come away with a win and go 3-0 up.

“Gonzaga is really, really good and we have to play really well to beat them this season,” Beard said.