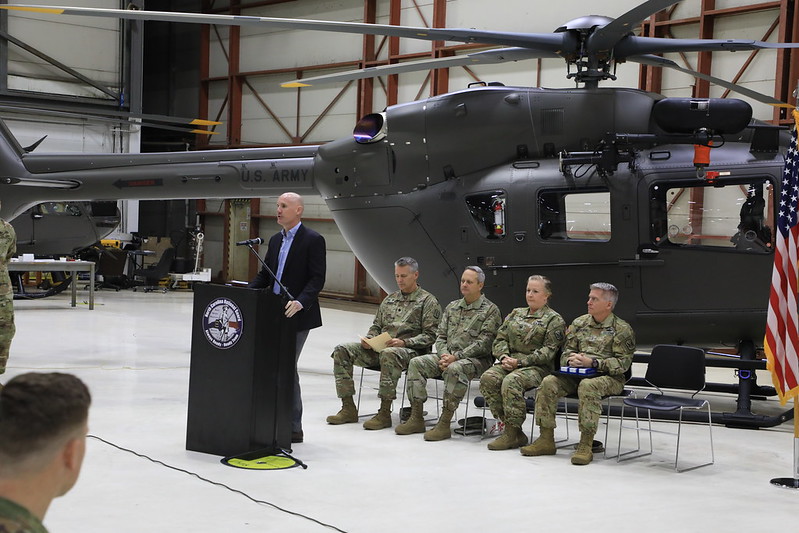 The NCNG joins eight other states in accepting the new model, which offers enhanced mission capabilities and security. The ceremony included speeches from NCNG leadership and representatives from Airbus, US Space and Defense, and an exchange of gifts.

“We are excited to enter this next phase of partnership with the US Army National Guard and to offer our newest member of the already capable H145 family. We look forward to supporting the National Guard fleet with the UH-72B, as we have for nearly two decades with our UH-72A variant,” said Scott Tumpak, vice president, responsible for Airbus US military helicopter programs

The upgraded model offers a wealth of new features, including the latest five-blade main rotor, ducted Fenestron tail rotor, twin Safran Arriel 2E engines and the Airbus-developed Helionix avionics suite. The UH-72B is built at the Airbus Helicopters, Inc. manufacturing facility by a workforce of approximately 300 employees, 40% of whom are US veterans. These additional capabilities will allow the NCNG to better serve in counter-narcotics and emergency response operations in federal, state and local missions.

“The addition of the UH-72B adds significantly to what our NCNG aviation units can do for citizens during natural disasters,” said Col. Benny Collins, NCNG State Aviation Officer. “With more power and the 4-axis autopilot, it greatly improves our ability to perform helicopter rescues.”

Detachment 1, Bravo Company, 2-151st Aviation Regiment, callsign One Eyed Goose, is the unit that will receive the new models. The leadership had positive insights as to why they were entrusted with the new helicopters.

“I’m not surprised that ‘One Eyed Goose’ was selected to receive two of the Army’s only 18 UH-72Bs. Since 2008, they have maintained an outstanding track record in the North Carolina Helicopter Aquatic Rescue Team (NC HART), Counter Drug Program, conducting flight lessons, maintenance and a successful deployment to the Southwest Frontier. I would like to thank Col. Collins and the State Army Aviation Office for ensuring that the D1/2/1-151 Aviation Regiment was at the top of the list for preserving these phenomenal aircraft,” said Col. Michele Harper , Brigade Commander of the 449th Combat Aviation Brigade.

This press release was prepared and distributed by the North Carolina National Guard.