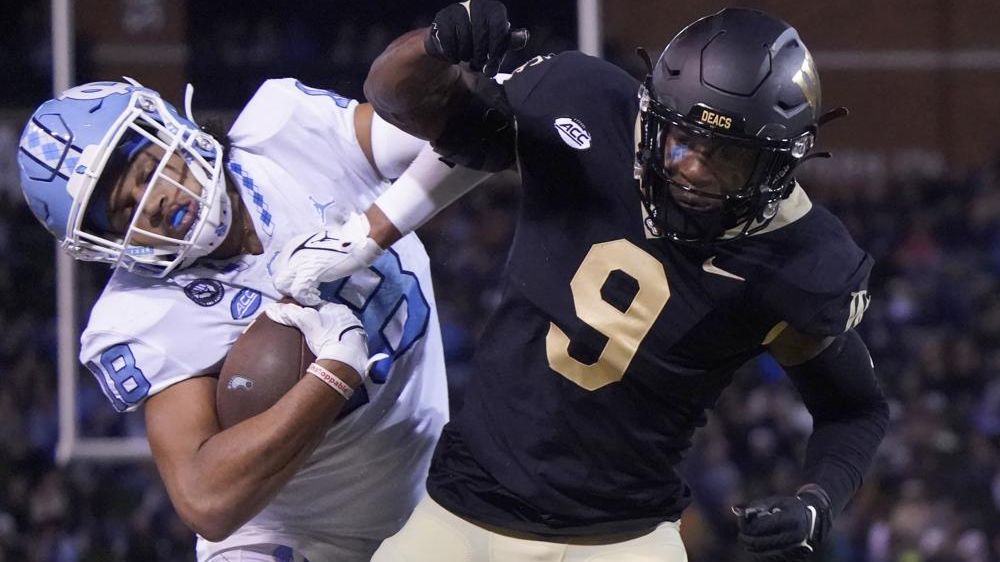 Noah Burnette blasted a 33-yard field goal with a 2-12 lead and UNC’s defense came with key stops in the fourth quarter to beat Wake Forest 36-34 on Saturday night, a win that claimed the Coastal Division title won the league.

The Tar Heels (9-1, 6-0) earned it with an away win in a marquee matchup between star quarterbacks Drake Maye of UNC and Wake Forest’s Sam Hartman. And while the offense was ahead all night, the Tar Heels’ defense stepped in at critical moments to keep them undefeated in league play.

As a result, at the Tar Heels’ dressing room celebration, ACC Assistant Commissioner of Football Michael Strickland walked in to present the team with the trophy for winning the Coastal. It even made its way to star receiver Josh Downs afterward while speaking to reporters near the locker room tunnel.

“They’ve really accomplished some amazing things and still have some left over,” said UNC coach Mack Brown. “I’ve been talking to them for a couple of weeks about not talking about the coastal (scenarios). I didn’t want to withdraw.

“I didn’t want anyone to lose. I didn’t want them to see someone lose. I wanted us to win and the boys did that.”

The decisive game came when the Tar Heels faced a point behind and Wake Forest’s offense pushed through midfield. But Cam’Ron Kelly jumped over the middle for an interception before Hartman’s throw to set up the drive for Burnette’s go-ahead kick.

Then the Tar Heels pressured Hartman for a fourth penalty with 64 seconds remaining – a moment that had Tar Heels players bouncing around the sidelines in anticipation. The Tar Heels killed the rest of the clock to seal the program’s second trip to the ACC title game and first since 2015 – this one coming with Brown in his second tenure at the school.

Maye threw for 448 yards and three touchdowns, each going to downs, which has continued his tears lately. Downs finished with 11 grabs for 154 yards, with all three of his results coming before halftime.

Hartman threw 320 yards and four touchdowns for Wake Forest (6-4, 2-4). Donavon Greene had two of those results, including a 60-yarder late in the third quarter for a 34-33 lead.

“I’ll tell you what I told the team: I’m disappointed with the result, not at all with the effort,” said coach Dave Clawson. “Our boys played their hearts out. This one hurts, it stings.”

UNC: Offense has taken the lead all season while defense has largely struggled for consistency. But that unit came out big here at key moments, which included a fourth stop inside their own 10 yard line early in the fourth. As a result, the Tar Heels improved to 6-0 on the road for the first time in program history, earning a date with No. 12 Clemson for the ACC title on December 3 in Charlotte.

Wake Forest: The Demon Deacons had broken into the top 10 on the AP Top 25 before suffering losses in Syracuse and in state No. 17 North Carolina. Those losses had shown protection problems for Hartman by delivering 12 sacks. The Demon Deacons had committed 11 turnovers in the two games. This time, they avoided most of those problems, although Hartman’s pick proved critical as the game’s only turnover at 4:20.

UNC looks likely to move up in Sunday’s new AP Top 25 poll after going 9-1 for the first time since the Coastal Division last won in 2015.

Kelly’s pick came when he crossed to the right from the left side of the field to jump ahead of Hartman’s throw for Greene.

“I was on the other side of the field, just patting the quarterback’s eyes,” Kelly said.

Clawson said the throw was “a split second late”.

Wake Forest: The Demon Deacons host Syracuse in their home finals next Saturday.