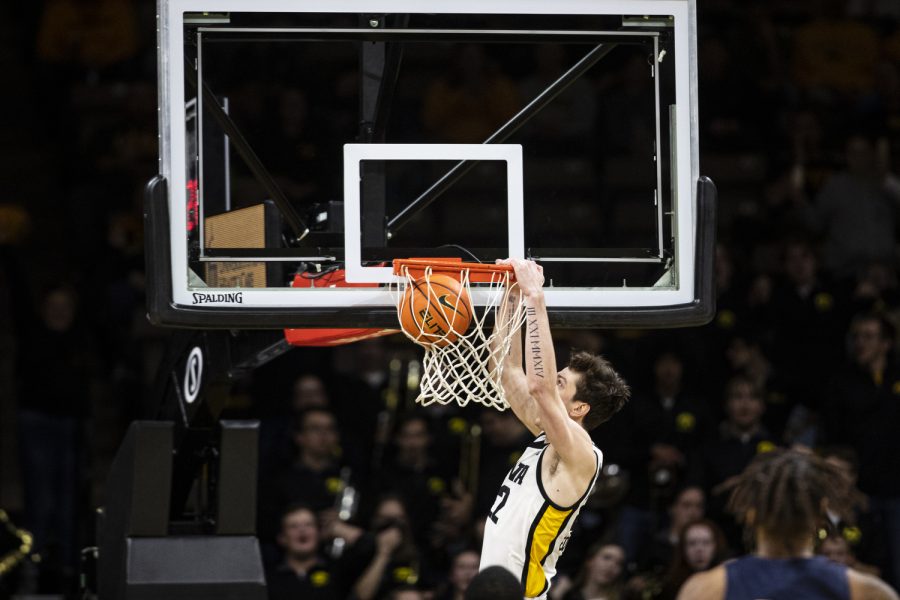 Iowa forward Patrick McCaffery dunks the ball during a men’s basketball game between Iowa and North Carolina A&T at Carver-Hawkeye Arena in Iowa City on Friday, November 11, 2022. McCaffery scored 21 points in the game. The Hawkeyes defeated the Aggies, 112-71.

For the second game in a row, the Iowa men’s basketball team pulled away from their opponent in the second half to a resounding victory.

Iowa outscored North Carolina A&T by 36 points in the final 26 minutes of Friday night’s action at Carver-Hawkeye Arena to secure a 112-71 win in the Hawkeyes’ second regular-season game of the year.

However, the Aggies were competitive in the early part of the game, utilizing an 11-4 run over a four-minute period early in the contest to draw within a 28-25 lead.

“We didn’t do a good job on the glass in that one segment, actually the whole beginning of the game,” said Fran McCaffery, Iowa head coach. “They overtook us in the first half. Believe them, they came to play. They were physical. We had a stretch where we thought five, six possessions in a row were pretty decent shots and we didn’t score and they hit some shots, you know, they executed their stuff.

McCaffery said two steals — one by junior forward Patrick McCaffery and one by junior guard Tony Perkins in the closing seconds of the first half — were big swing changes for the Hawkeyes.

With a 20-point lead at halftime, Iowa was beating North Carolina A&T 60-39 in the final 20 minutes. 34 of those 60 second-half points came from the Hawkeye bench.

Bench contributes in the second half

After the Hawkeye starters five with Patrick McCaffery, Perkins, Filip Rebraca, Kris Murray and Payton Sandfort scored Iowa’s first 78 points of the night, the bench mob tallied the last 34 in the final 12½ minutes.

“[The younger players are just getting adjusted to the speed of this game,” Sandfort said. “They’re just getting used to it, so I’m excited for that.”

Eight Iowa bench players saw minutes and everybody except Luc Laketa got into the scoring column.

“I didn’t give them much playing time in the first half,” Fran McCaffery said of his bench players. “I put them in, we had a difficult stretch offensively, I put the starters back in, and they played most of the first half. I told [the bench players] At halftime I said, ‘If you guys come out again, I’ll leave you out there.’

“They were really good, I thought, doing the things they had to do to gain experience and be ready to play against a team like Seton Hall. [With the bench players on the floor]we moved it, we ran our offense, we treated ball filters, we rebounded better and we still ran.

Patrick McCaffery had nine of his career-best 21 points and 15 in the first half in the first four minutes of Friday’s game.

“I didn’t kick the ball the way I wanted to,” said Patrick McCaffery. “It doesn’t really matter at this point, you know you’ve won with a lot. I’ve always been a goalscorer, I knew I was going to have a big night at some point. I’m glad it was tonight and I’m glad we won. The beginning always helps.”

The Hawkeyes will face their first road test of the season on November 16 when they travel to South Orange, New Jersey, to face the Seton Hall Pirates at 6:30 p.m. The game will be carried over to FS1. Seton Hall is currently 1-0 this season, with a 79-52 win over Monmouth.