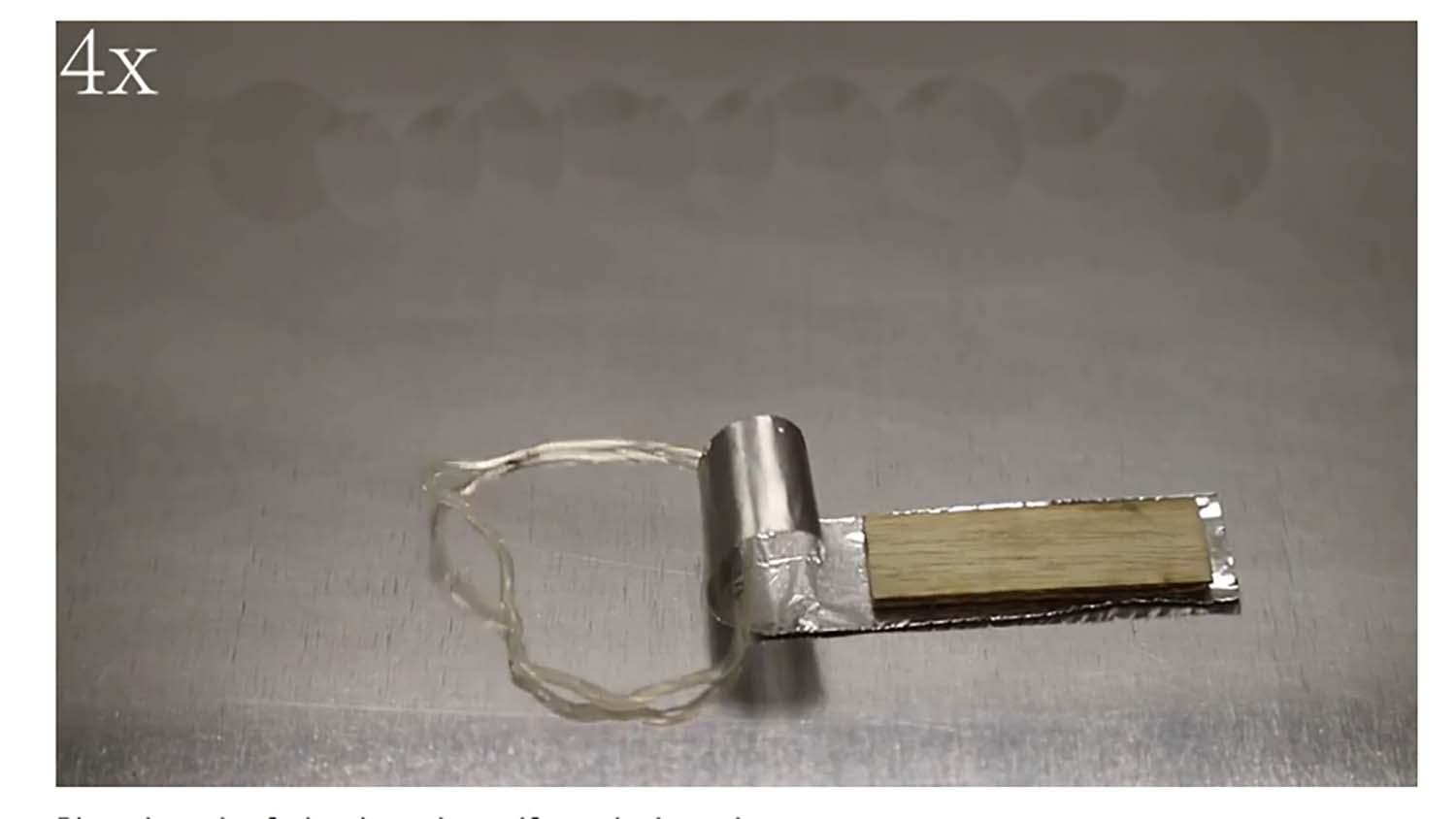 Researchers at North Carolina State University have developed a ring-shaped soft robot that can crawl across surfaces when exposed to elevated temperatures or infrared light. Researchers have shown that these “ringbots” are able to tow a small payload across the surface – in ambient air or underwater, as well as get through a gap narrower than its ring size.

The Ringbots are made of liquid crystal elastomers in the form of looped bands resembling a bracelet. If you place Ringbot on a surface that is at least 55 degrees Celsius (131 degrees Fahrenheit) hotter than the surrounding air, the portion of the band that touches the surface will contract, while the portion of the band that is exposed to the air will contract is not contract. This induces a rolling movement in the belt. You can find the Ringbots video here: https://youtu.be/yL5gVAjh1mQ.

When researchers shine infrared light on the Ringbot, the portion of the band exposed to the light contracts while the portion shielded from the light does not. This also induces a rolling movement in the belt.

In practical terms, this means that when placed on a hot surface, the crawling Ringbot will move from bottom to top. But when exposed to infrared light, the movement starts from top to bottom.

One of the things that drives this continuous movement is the fact that the Ringbots are bistable, meaning there are two forms at rest. When the ribbon begins to twist, it either snaps back to its original shape or snaps forward to the other bistable state.

Imagine a rubber bracelet shaped like a ribbon. If you fold two ends of the bracelet forward a little and then release, it will snap back to its original shape. But if you fold the ends over far enough, it snaps over – essentially you fold the bracelet inside out.

In Ringbots, “folding” occurs through the application of constant heat or infrared light, causing the elastomer to contract and twist. If the ring robot is symmetrical, it will essentially dance in place.

“But by constructing the shape of the loop where one side of the loop is permanently twisted, the structure is asymmetric,” says Jie Yin, corresponding author of an article on the work and associate professor of mechanical and aerospace engineering at the NC Federal State. “This means that the loop is exposed unevenly to the heat or infrared light, causing the soft robot to move laterally across the surface.”

In demonstrations, the Ringbots were capable of towing a small payload and operated both in ambient air and underwater.

Researchers also showed that a ringbot can adjust its body shape to squeeze through a tight space more than 30% narrower than the ringbot’s diameter. And if the gap is too narrow for the soft robot to go through, it will redirect itself to move away from the gap.

“This is a fundamental advance, not something designed for a specific application,” says Yao Zhao, a postdoctoral researcher in Yin’s lab. “We demonstrate what can be achieved when ‘physical intelligence’ is built into the material and design of the structure itself, allowing it to move and navigate in space without computational effort.”

The article “Self-sustained snapping drives autonomous dance and motion in free-standing undulating rings” is published in the journal Advanced Materials. The first author of the work is Yao Zhao, a postdoctoral fellow at NC State. The paper was co-authored by Yaoye Hong and Fangjie Qi, Ph.D. students at NC State; Yinding Chi, a recent Ph.D. NC State graduate; and Hao Su, associate professor of mechanical and aerospace engineering at NC State.

Note to the editor: The study summary follows.

Abstract: The exploitation of snapping, an instability phenomenon observed in nature (e.g. Venus flytraps), for autonomy has sparked growing interest in autonomous soft robots. However, the achievement of self-sufficient snapping and snap-controlled autonomous movements in soft robots remains largely unexplored. Herein we report the use of bistable band ring-like structures to realize self-sustaining snapping in a library of liquid crystal elastomer soft wave rings under constant thermal and photothermal actuation. The self-sustaining snapping induces a continuous flipping of the ring that drives autonomous dance or crawling movements on the bottom and underwater. The three-dimensional, free-standing wave rings use either a highly symmetric or asymmetric twisted shape with tunable geometric asymmetries. We find that the former prefers periodic in-situ self-dancing motion due to isotropic friction, while the latter exhibits directional creep motion along the predefined axis of symmetry during fabrication due to asymmetric friction. It shows that the creep speed can be tuned by the geometric asymmetries, reaching a peak speed at the highest geometric asymmetry. Finally, we show that the autonomous crawling ring can also adapt its body shape to get through a confined space that is over 30% narrower than its body size.