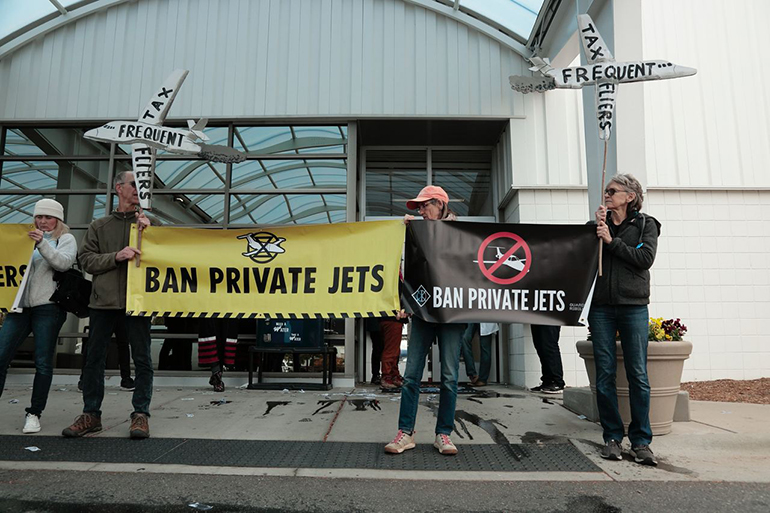 Four climate activists were arrested Thursday for closing the entrance to the Wilson Air Center, a permanent base operator for private jets and other small aircraft at Charlotte Douglas International Airport.

The four arrested — climate scientist Peter Kalmus, global change economist Rose Abramoff, Deborah Kushner with Third Act Virginia and Declare Emergency, and Indigenous activist Dakota — along with other participating activists, made three demands: ban private jets, tax frequent flies, and make the polluter pay. According to a press release, the activists wanted to highlight the role of wealthy people and the outsized role of nations in generating luxury emissions.

Demonstrators barricaded the doors to the main terminal and the gate that led directly to the tarmac. Kalmus and Kushner chained themselves to the front door of the airport, while Abramoff and Dakota chained themselves to the gate leading to the jets. Other protesters stood outside with banners chanting demands. The activists spilled fake oil and scattered fake money on the sidewalk.

The protest was one of 17 private airport protests held on Thursday targeting the ultra-rich for their outsized role in driving the climate crisis. Activists were arrested at private airports in 12 other countries: Australia, Belgium, France, Germany, Italy, Netherlands, Norway, Portugal, Spain, Sweden, Switzerland and the UK.

“The rich are burning the planet down. The damage is irreversible. We have to stop them and obviously it’s high time to ban private jets. That would be a start,” said Kalmus.

According to Oxfam, the world’s richest 1% produces more than twice as many emissions as the poorest 50%. The press release noted that the Wilson Air Center is regularly used by celebrities like Michael Jordan and wealthy corporate executives who visit the nearby Trump International Golf Course.

According to a local spokesman, Thursday’s incident had no impact on operations at the Wilson Air Center.

CMS interim superintendent Hugh Hattabaugh announced Wednesday night during a meeting of the Charlotte-Mecklenburg Schools Education Committee that he will leave his position at the end of the year, six months before his one-year contract expires.

Hattabaugh explained that he made his decision based on the need to care for his elderly father.

“We wish he could stay through the school year but we understand and accept his reasons for leaving. Family must always come first,” the Education Committee said in a statement on Thursday. “We are very grateful for everything he has done during his time with us. Post-pandemic, CMS has regained its footing. Hugh has brought a new sense of urgency to the district’s child-rearing work. Under his leadership, the district has strengthened and streamlined critical processes and safeguards. We are therefore well positioned to continue on the positive path he has charted for us and we thank him for his skills and expertise which have propelled us forward.”

It’s unclear how the board will fill the position as they continue their search for a new superintendent, of which there have been seven in the past 10 years.

In this search, CMS searches for resident entries. More than 1,300 people have already completed the CMS Community Engagement Survey to help find Board Superintendents, and CMS families and community members are encouraged to complete the survey before the November 18th ends. CMS will also host a Spanish language virtual listening session on Tuesday 15 November (link contains Spanish version of poll).

Voting rights organization Democracy North Carolina on Thursday released a summary of this week’s primary election that included some interesting statistics on early voting and same-day registration. According to the press release, more than 2 million voters in North Carolina chose to early vote, compared to 1.97 million in 2018 — an overall increase of 36,375, or 1.8%, even with one day less early voting in 2022.

Black voters showed up with the highest early voting rates, with 21% of registered Black voters having cast their ballots during this period. Of all Native Hawaiian or Pacific Islander people—the latest racial category added to the NC Voter Files—who voted in this election, 25% used same-day registration. Voters who marked “not designated” or two or more races used same-day registration at the next highest rates — 8% and 5%, respectively.

Statistics from Democracy North Carolina showed that people of color and college students benefited the most from same-day registration, which the organization emphasized to expand participation and inclusion for all voters. More than 656,000 non-partisan ballots were cast ahead of Election Day, compared to 676,885 Republican and 827,874 Democratic votes.

Democracy North Carolina’s bipartisan Vote Protector program, designed to ensure every eligible voter in the state can successfully cast their ballot, deployed more than 225 Vote Protectors to 37 counties, including Mecklenburg, on Election Day. Election protection advocates identified “hot spots” — with expected high levels of activity aimed at confusing or intimidating voters — ahead of Election Day so they could be prepared on the ground to respond accordingly.

“We expect bad actors to spread disinformation and raise doubts about their political gain. Our elections, our democracy, and those working to protect both should be safe from intimidation and violence,” said Adrienne Kelly, co-executive director of Democracy North Carolina, in a press release. “Regardless of the outcome, we must all accept the results of our free, fair and safe election. We know that when our poll workers take the time to count and check every ballot, it shows our democracy is working.”

The grant funds technical training for the LGBTQ+ community

The City of Charlotte recently awarded a $250,000 grant to Per Scholas North Carolina, a nonprofit organization that offers free technology courses to advance economic opportunity and mobility in underserved groups, and there is limited time left to become to apply for courses.

In Charlotte, Per Scholas will work with Out in Tech chapter Charlotte to educate underserved members of the LGBTQ+ community. Per Scholas’ next in-person IT Support course starts on November 29th and Per Scholas is accepting applications to attend the course until Monday November 14th. 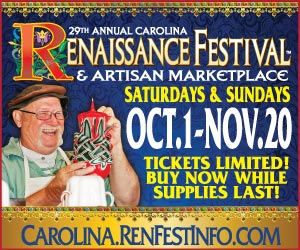 According to a Rutgers University study, LGBTQ+ people experienced higher levels of unemployment than the general population as a result of COVID-19, suggesting that LGBTQ+ people are more strongly represented in less stable service and retail jobs. The challenges for transgender people are even greater. A 2021 McKinsey report found that transgender adults are twice as likely to be unemployed as cisgender adults.

Per Scholas started the technology education in Charlotte in June 2020 with about 280 graduates so far. Alumni now work in technology roles at TEKsystems, UPS, Charter Communications, Lowe’s, Bank of America, Wells Fargo, and others.

Two men were killed by gun violence in two separate incidents earlier this week. Just before 3am on Sunday, police arrived on Central Avenue near Norland Road, where they found 29-year-old Wilson Mejia dead from a gunshot wound. No arrests have been made in the case.

Just after 8:30 a.m. Monday morning, police responded to another exchange of gunfire on Drury Drive near Derita Creek Park in north Charlotte, where they found 34-year-old Daymon Holley-Long with a gunshot wound. Police and paramedics rendered assistance, but Holley-Long was pronounced dead at the scene soon after. No arrests have been made in the case.

Become a Nerve Member: Get better connected and become a member of Queen City Nerve to support local journalism for just $5 a month. Our community journalism informs you through a range of different voices.