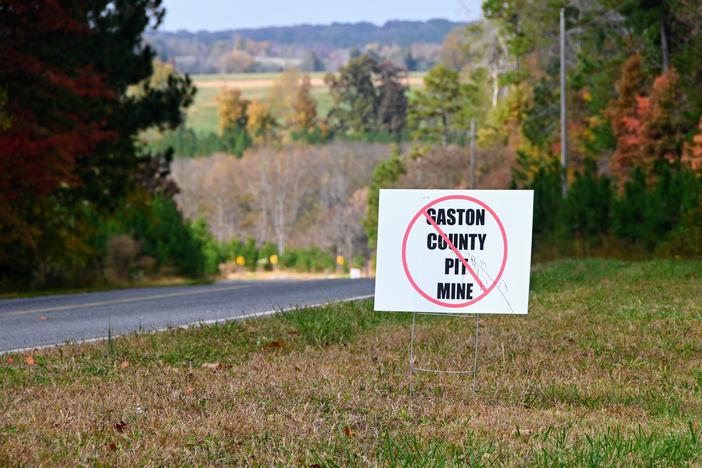 CHARLOTTE, NC — As world leaders gather for another climate summit in Egypt, the US is pushing to mine more lithium for electric vehicle batteries at home. EVs will help reduce pollution from transportation, the nation’s largest source of greenhouse gas emissions that cause global warming. But there is a trade-off, residents near Charlotte, where a large open-pit mine is planned, have learned.

A company called Piedmont Lithium plans to build a mine and processing plant on 1,500 acres in northern Gaston County, about 30 miles west of Charlotte.

Emily Winter, community relations coordinator and geologist for Piedmont, leads us to a large outcrop near what may one day be the mine’s south pit.

“So this rock contains spodumene, the mineral. And this mineral spodumene contains lithium, which we can convert into lithium hydroxide, which is then used in batteries,” explains Winter.

Lithium deposits run through the county in a kilometer-wide north-south band known as the Carolina Tin-Spodumene Belt. Mines here provided most of the world’s lithium for decades in the 20th century, until cheaper sources were found in South America and Australia. Now the element for electric vehicle batteries is in high demand, and investors see an opportunity.

“There is very little production of lithium feedstock or any other battery feedstock in the US. The potential is there, but it will take time to bring it online,” said Keith Phillips, CEO of Piedmont Lithium.

When Piedmont Lithium inaugurated its new headquarters in the nearby town of Belmont this summer, US Senator Thom Tillis was there. The North Carolina Republican said the US needs its own sources of lithium and lithium processing to counter China.

“The Chinese have a stated strategy to be the world’s economic and military superpower by 2050. And they don’t intend to do it through a big war. They intend to do this by stretching out their tentacles around the globe economically,” Tillis said. “They intend to ensure that the western world depends on them for lithium, tantalum and rare earth minerals so they can literally beat us by never firing a shot.”

Tillis said that’s why he supports Piedmont Lithium’s efforts to open a new mine — as long as it’s done in an environmentally responsible manner. But that’s the catch.

Piedmont’s plans call for four open pit mines 500 feet deep. That means demolishing houses, digging up fields and forests, and cutting off streams. Some neighbors have sold their land to the company. But others whose property borders the site are not happy.

Bell is a former district attorney and has been following Piedmont’s plans since 2017, when the company approached him about mining on his land. He turned down the offer after seeing a detailed map of the proposed mine.

“Suddenly I saw these huge mines – open pits … We have enough of them here, it’s poisonous,” he says.

He speaks of old nearby lithium mines that closed in the 1980s and 1990s and are now contaminated with arsenic naturally occurring in the area’s soil and rock.

A few miles away, on the other side of the mine site, Warren Snowdon has similar concerns. His family’s old farm is only about 600 meters from the planned east pit, across a creek. He helps run an opposition group called Stop Piedmont Lithium.

“Our problem is on all fronts: it’s water. it’s air It’s light pollution. it’s noise It is the country’s transport transition to renewable energy.

State and local officials have yet to approve the mine

Piedmont Lithium is still subject to key approvals, including federal air and mining permits. Both are being delayed while the company responds to requests for more information from North Carolina authorities. Piedmont also faces local political opposition.

Chad Brown heads the Gaston County Commission that must approve a mine conversion.

“With the information I have now, I probably wouldn’t call for a vote,” Brown says. “I should have loads more information, just on the environmental side, and air quality, water quality and other things.”

Last year the commission passed a 60-day moratorium so it could update its zoning rules to allow a mine. The ordinance has some teeth — it restricts blasting and truck traffic, Brown says. But he’s not sure Piedmont will be able to get the electricity and water it needs for mining and processing.

When asked if he thinks the mining project will happen, he says, “I think right now you’re still at 50-50 just because it’s a long way to go.”

“So the approval process is more complicated and will take longer. And our plan, our hope, is that we’ll go into production in Carolina in 2026 and get fully sanctioned and sanctioned and funded sometime in 2024,” he says.

While pursuing that goal, the company has a backup plan: It’s building a processing plant in Tennessee with the help of a $141.7 million federal grant. And it relies on mines in Quebec and Ghana to supply lithium ore.

The neighbors of Piedmont, North Carolina support this backup plan in lieu of their community’s open pit lithium mine.