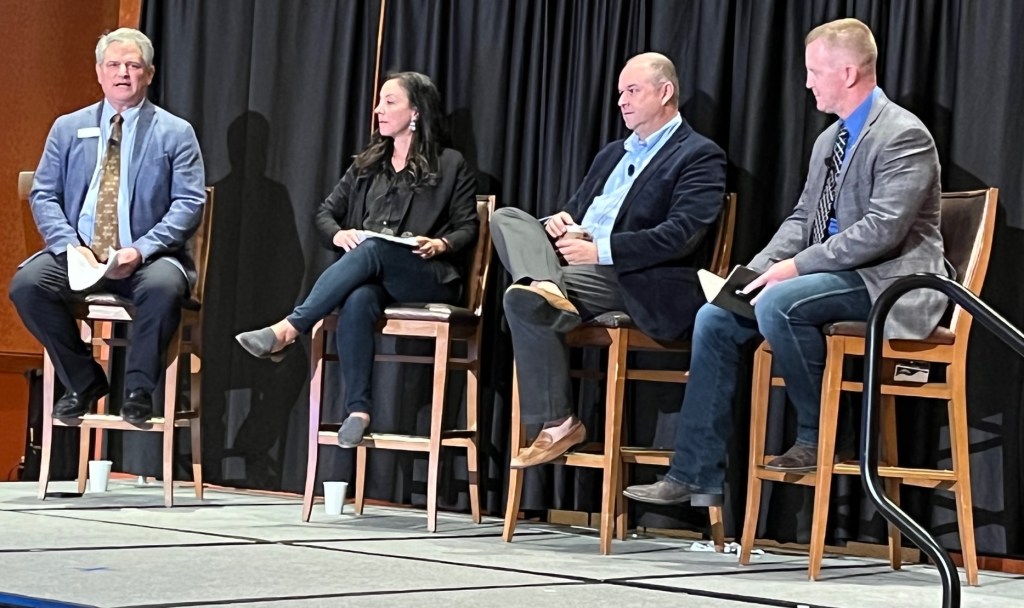 Those working in the upper Colorado River basin to break the impasse on future river allocation want to accomplish a few select things:

You want the upper and lower tanks to be treated the same.

They want confirmation that most of the usage problem is occurring in the lower basin states of California, Arizona, and Nevada.

They want to preserve the economic vitality of the upper basin states of Colorado, Utah, Wyoming and New Mexico.

Using an airplane analogy, Becky Mitchell, Colorado’s commissioner at the Upper Colorado River Commission, said, “You have to put the oxygen mask on yourself before you help others. That has to be our strategy.”

In the 100th year of the Colorado River Compact—signed on Thanksgiving Day 1922—use of the river remains highly controversial.

The treaty signed in 1922 divided the river basin into northern and southern parts. Each part was granted 7.5 million acres of consuming use of the river. States in each part were expected to share their share of the water.

In the Southern Basin, California was allocated 4.4 million acres, Arizona 2.8 million, and Nevada 0.3 million acres. The two largest users in the southern basin, the Metropolitan District of Southern California and the Imperial Irrigation District, dominated the allocations.

In 1944, the United States allotted 1.5 million acre feet of bounty from the Mexico River by treaty.

The pact, Cullom said, was designed to create equity between regions and create space for development.

However, the cymbals worked differently. While the upper basin uses the region’s hydrology to determine user allocations—in short, water use depends on snowpack—the southern basin relies on the large reservoirs of Lake Mead and Lake Powell. Together they have a combined storage area of ​​50 million acres, and they were full in 2000, Cullom said.

Today these reservoirs have a capacity of 28% and 25% respectively and are sinking rapidly.

The drought that began in 2002 affected the upper basin but not the lower because of the reservoirs, Mitchell said.

“In northern Colorado, we handle it differently. The lower basin has received a rate of 110% in recent years. The upper basin has been allocating 70% for several years. If we had used 100% quota last year, we would have drained Lake Granby,” Whitaker said.

“As we look to the future, we have to say, ‘This can’t happen,'” Mitchell said. “Think of the stock component of the pact. One of the things to remember is that the economic drivers are also in the upper basin,” she said.

Cullom, who lives in Park City, Utah, said authority has grown around the system. “(When) people believe that because of their actions they are entitled to things that no longer exist, they do irrational things to restore what they believe to be rightfully theirs. There are those who believe they are owed water from the Upper Basin (to continue their economic interests),” he said.

The Upper Basin took proactive measures to release water from Blue Mesa Reservoir and Flaming Gorge to protect infrastructure at Lake Powell. However, this strategy has limitations.

In June, the Bureau of Reclamation gave the pools 60 days to come up with a plan. The upper basin responded within that timeframe with a plan that would implement a voluntary conservation program, examine demand management, continue the prior appropriation laws fundamental to Colorado’s water rights, and place a strong emphasis on conservation, Mitchell said. Hard numbers were not part of the plan as the upper basin bases its water use on snowfall, which cannot be predicted.

The southern basin has yet to come up with a plan.

“One of my biggest concerns,” Whitaker said, “is that if we have a good winter this winter, any relief Mother Nature might offer could delay negotiations.”

“Titanic is what happens when you keep doing the same thing, expecting things to get better on their own,” Cullom said. “We cannot solve the problem for you. You have to make compromises in the lower pool.”

This article was first published by BizWest, an independent news organization, and is published under a license agreement. © 2022 BizWest Media LLC.