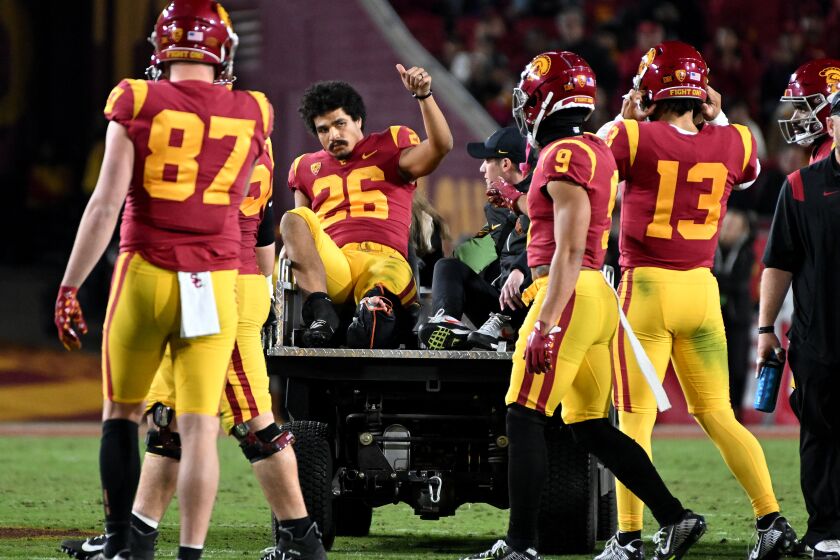 The final dress rehearsal dragged on, the final issues being ironed out before the next showdown in Crosstown next week, when Tuli Tuipulotu stormed out of the corner and closed the curtains on Colorado himself.

Aside from the number 8 inked next to his name, little in the past month had indicated that USC was ready for the bright lights and big stage expected at the Rose Bowl next week. In back-to-back games, California and Arizona had sidelined the Trojans. Now Colorado, a Pac-12 doormat and one of the worst teams in college football, was pushing them around too.

It wasn’t until its star defenseman took center stage, forcing his way into a collapsing pocket and unleashing a fumble in Friday’s second quarter, that USC found the courage to push back. It pushed and pushed and pushed from there until its backups added one final nudge to a stunning 55-17 win.

After a frustrating first quarter, USC’s often-criticized defense put in one of its most impressive performances in months, albeit against a team that has scored fewer points than 128 other teams this season. It held Colorado for 158 yards in the last three quarters, hauling in three sacks and forcing two turnovers.

“This is how we should play every week,” Tuipulotu said of defense.

But a night that would otherwise have provided the necessary catharsis was marred instead by a major setback when star running back Travis Dye left the field on an injury cart, his final collegiate season near the home stretch.

All season Dye had been one of the strongest leaders in the USC locker room, a critical voice in the ongoing cultural shift under coach Lincoln Riley. Each week, Dye gave a new pre-game speech to inspire the team.

But when USC’s senior leader lay on the turf and rocked his left leg in the second quarter, the coliseum lay still. The Trojans’ sideline emptied as it was loaded onto an injured cart, and players surrounded their fallen teammate in solidarity.

“It shook us all a bit,” Riley said of the injury.

The coach did not provide any information about the diagnosis. But he confirmed the worst: Dye won’t be returning this season.

“It just sucks. There’s no other way to put it,” Riley said. “He was one of the most important cogs in this team.”

And now, with the most critical phase ahead, USC must continue without the engine of its offense and the soul of its dressing room. His first test? Suitable for the top rushing offensive in the Pac-12.

“Now we have a chance to reset,” Riley said, “and play these guys across town.”

It’s not going to be easy from here, even though USC made it look like it did on Friday. Dye’s injury was still a threat for the rest of Friday, even as USC continued to roll without running back. Whether it can move the ball next week without him is another question.

If there’s any hope of outlasting UCLA — and Notre Dame after that — Caleb Williams will almost certainly have to shoulder the full weight of the USC offense. He didn’t wear it consistently on Friday, barely completing 50% of his passes (14 of 26) for 268 yards and three touchdowns.

It will also be up to Austin Jones to fill the gap in USC’s backfield. He finished with 113 all-purpose yards and a touchdown after stepping in for Dye. Both must do their best against a stingy UCLA defense.

Regardless of how it ended on Friday, USC’s offense was off the rails early on. Two of the Trojans’ first three attacks ended in three-and-outs. The other ended with an interception in Colorado wrestled out of the hands of receiver Brenden Rice.

The pick was only Williams’ second of the season – and only the second turnover for the Trojans this season. Despite this, it earned more points than any other USC drive in its opening quarter. On the next play, Colorado quarterback JT Shrout pressured down and threw away a pass from the end zone while still in the pocket. Courtesy of the USC defense, a premeditated grounding was called and two points set up.

After a frustrating start, the Trojans were 3-2 behind Colorado. Her offense had just eight yards and her quarterback had completed just one of six passes for two yards. But their fortunes would turn in a flash, as Williams met Kyle Ford once to move to third and long, then again. The spark was enough to jumpstart USC’s offense, which put in a 12-play drive that was topped by a Williams keeper for a two-yard touchdown.

Tuipulotu’s sack and forced fumble put the ball back on USC’s offense. Barely two minutes into his first goal, Williams was left unattended again, sauntering untouched into the end zone for a second and extending a lead over Colorado that would quickly grow from there.

But the order of the scores was just a subtext given Dye’s injury. As he left the field with the cart after the USC win, his left leg in a cast, he waved to the fans who had gathered around the tunnel. They roared in appreciation, knowing deep down how much they had lost by winning on Friday.

This story originally appeared in the Los Angeles Times.