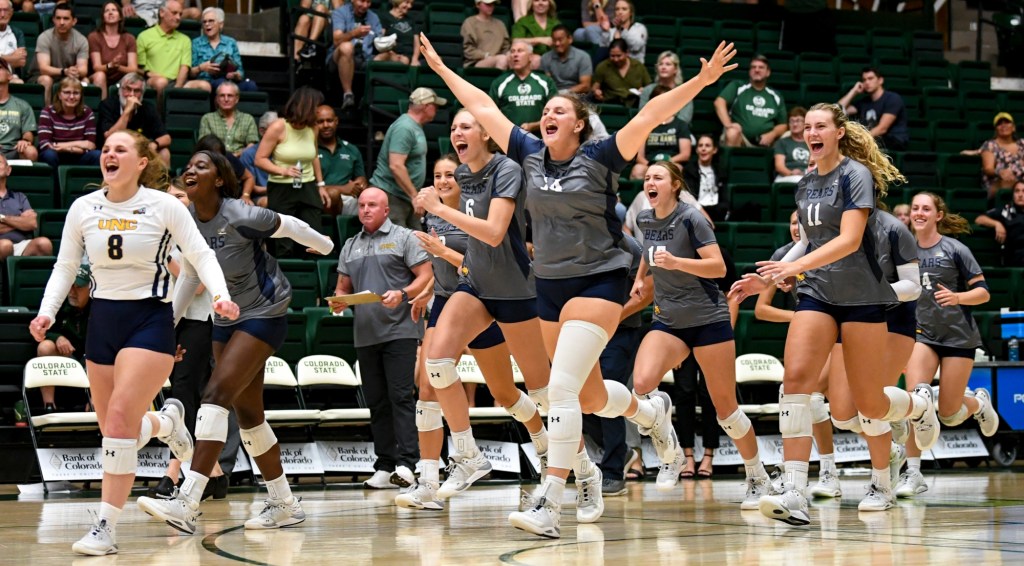 Thirteen years ago, eastern Washington hosted the 2009 Big Sky tournament. The University of Northern Colorado won its first-ever Big Sky championship. On Friday, back in Cheney, it added another regular season title to the Friday night record book.

“We just weren’t ourselves in the first two sets, but the positive thing is that we were able to turn around in the game and didn’t have to wait until tomorrow,” said Bears coach Lyndsey Oates. “I thought we had a good lead on the floor that could make that change. We came here to win three sets and we did it. It just took us a little longer to get started than we would have liked.”

In their last game, the Eagles upset Portland State in a four. They started the match in a similar fashion, dominating the No. 1 conference for the first two frames. Eastern hit a whopping .462 in the second set with 14 kills and just two penalties.

However, UNC looked tense and off the grid in the first two sets. It hit below .200 on both occasions. The first frame was the worst, with the Bears recording 11 kills and 10 misses at a batting average of just .032.

The second set was better off offense as Northern Colorado reduced its attacking errors, but it still had four errors from the service line.

Eastern looked set to ride to a comfortable upset in three sets, but there’s a reason UNC succeeded.

Northern Colorado came out of the locker room with more intensity and rhythm. Oates said much of the change was driven by players.

The Eagles stayed with the Bears early in the set and held the set within a few points.

Senior Makenzie Harris recorded a kill to put her team 7-5 ahead and eventually started a 12-0 run. The Bears took an 18-5 lead from which Eastern never recovered.

Freshman Brynn Reines deserves a lot of credit for serving during this series.

“Brynn’s service run really opened up the game for us and gave us just enough momentum to get over that hump that we needed,” Oates said. “That’s why we’re using her in this role as a serving sub. She did a good job of getting them out of the system to create some defense points.”

The third set swung in favor of UNC, who led the rest of the way. PhD student Kailey Jo Ince recorded match point with a brutal kill. Ince is credited with eight game-winning shots this season.

Ince led the team with 17 kills, with seniors Rachel Hickman and Makenzie Harris right behind. Hickman finished with 16 while Harris had 11.

Eastern Washington was successful in the block and recorded 14 rejections from Bears attacks, but UNC was also looking good. Seniors Mimi Dunda, Cece Huhn, Hickman and Harris contributed to several blocks at the net.

The Bears finished the tournament with four aces and 13 errors. Oates said the Eagles dominated from the line and with their early pass, but UNC settled in and got into their system.

The team started the conference game with 0:2 and in the meantime was 2:3 and was almost the end of the overall standings. Winning a regular-season title is an achievement every year, but this time it’s extra sweet.

“With such a slow start to the conference that we’ve had … I knew we had a talent to do a push-come conference tournament (time) and play really good volleyball, but I didn’t know if we could.” too big of a hole to climb out of to become the regular-season champion,” Oates said. “I like that we’ve been winning consistently in the last 10 games and that we can put ourselves in a position to play well in next week’s conference tournament.”

Overall, Northern Colorado has won the regular season or conference title nine times, and both three times. Oates has led the program to six NCAA tournament appearances since she was hired in 2005. She credits all players who have gone through the program with making it to this point.

However, she doesn’t yet view the team as a conference-level dynasty.

“We position ourselves every year, but honestly we have to be more dominant to get that title,” Oates said.

The Bears end the regular season Saturday at 7 p.m. against Idaho. They will travel to Ogden, Utah next week to kick off the Big Sky Tournament.