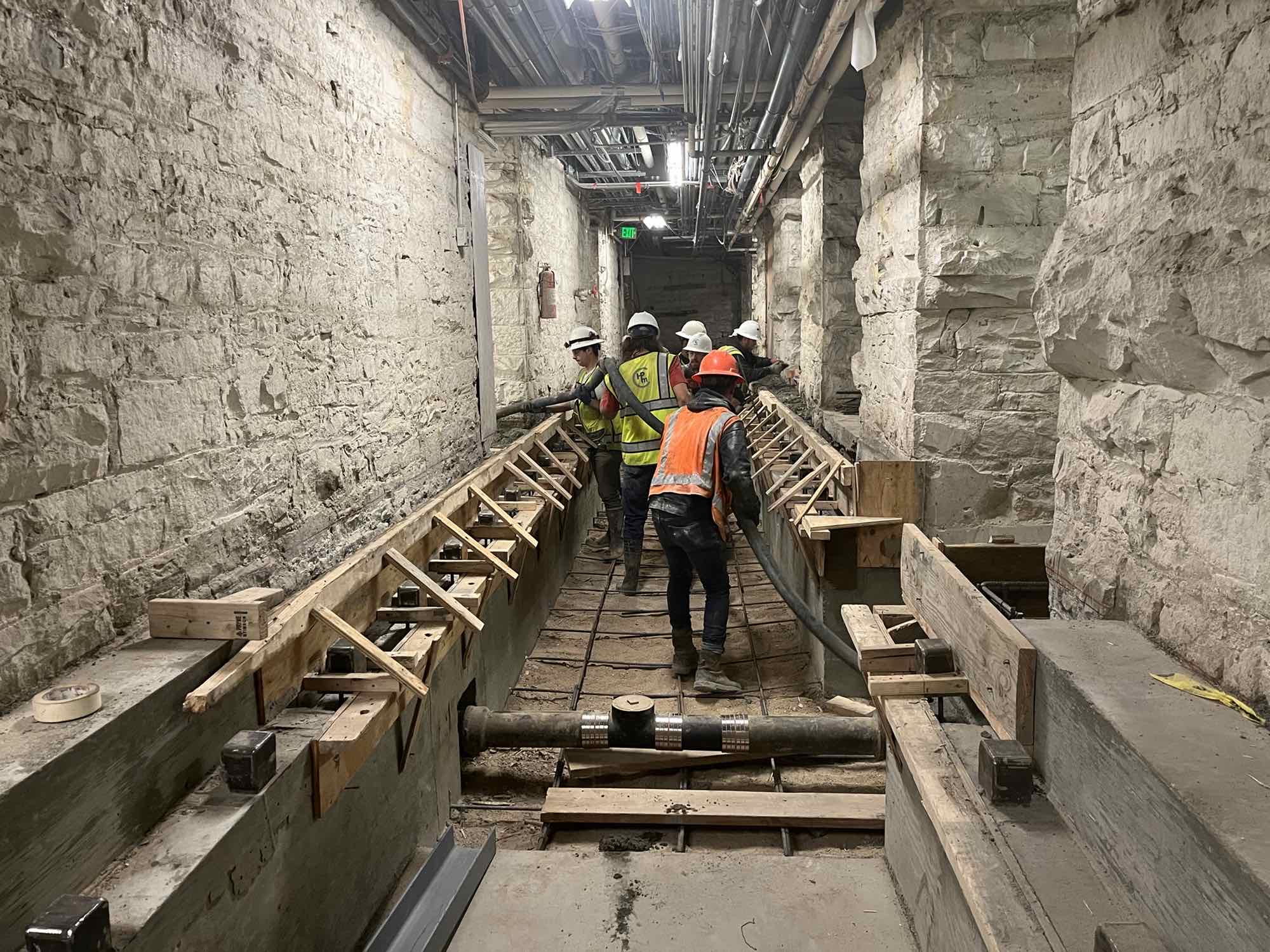 The project required the construction team to hand excavate 1,200 cubic yards of earth in the cramped basement of a 128-year-old building to lay the foundation for the future modernization of the Colorado Legislature. As part of the project, the initial preliminary work for future heating and cooling systems and the conversion of large parts of the basement into usable office space were completed. With nearly 300,000 visitors each year at the State Capitol, ensuring the convenience of end users is critical to Colorado’s government agency.

Although the project spanned 46,000 square feet, access to the Colorado State Capitol’s basement level for the demolition, excavation, and pouring of concrete needed to complete this fundamental repair was extremely limited. The project team developed several imaginative solutions to overcome the constraints of a sparse construction site that included a multi-conveyor belt
System for removing the excavated material and a design strategy for concrete installation in the basement through a punched-out window shaft.

Using five small conveyor belts, the team dug up soil by hand with buckets and then loaded it onto electric buggies, which carried the material to the window well for conveyor belts to remove from the building. To accommodate the concrete fixtures, the team ran a slickline through a 3′ x 5′ punched window to pump concrete from the upper level to the basement
where the pump truck was. A placement crew of ten was required to move and modify the slickline during concrete placements, which were sometimes over 200 feet from the pump truck and snaked through the basement structure.

The project team managed this project effectively by:

1. Detailed planning to determine who can safely work on site each day
2. Consistent communication about daily work logs
3. Build trust between all team members who have had to work closely together in a very limited location for long periods of time with zero incident rate.

The limited lot space and unforeseen conditions for this Capitol project required innovative use of construction techniques and labor to complete the project before the start of a new fiscal year for the state. Access to the website was responsible for most of the project’s decisions.

The project team was allocated a small piece of land on one of the Capitol lawns and a limited area in an adjacent parking lot where pump trucks could pull up to reach the material distribution window shaft. At one point, the team stacked transformers inside the building and called out a crane company to erect a catenary framework only about 1.5 feet apart. That
The near-exact rigging process left little to no room for error to safely get all materials in and out of the basement.

During the excavation there were some areas where the team would dig the trench and material would spill out from under the adjacent concrete supported walls. As a result, the team had to develop a plan to stabilize support from the existing foundation. In addition, settlement and elevation changes were a complicated issue throughout the basement, with a total of 6" Differences in floor level throughout the building, requiring the team to continually adjust existing doors and openings throughout the building.

impact on the community

The Capitol Repair Project is having a significant impact on Colorado residents and visitors to the Capitol as it was a critical component for future upgrades to a building originally constructed in the 1890’s. With nearly 300,000 visitors each year to the State Capitol and approximately 70,000 receiving tours of this publicly accessible building, ensuring end-user convenience is critical to Colorado
board and visitors. The project team’s work paved the way for utility relocation. and modern amenities to be installed in the Capitol building to increase people’s comfort while visiting this historic landmark. In addition, the project team was awarded three rare commemorative tokens of gratitude for their professionalism, competence and efficiency.