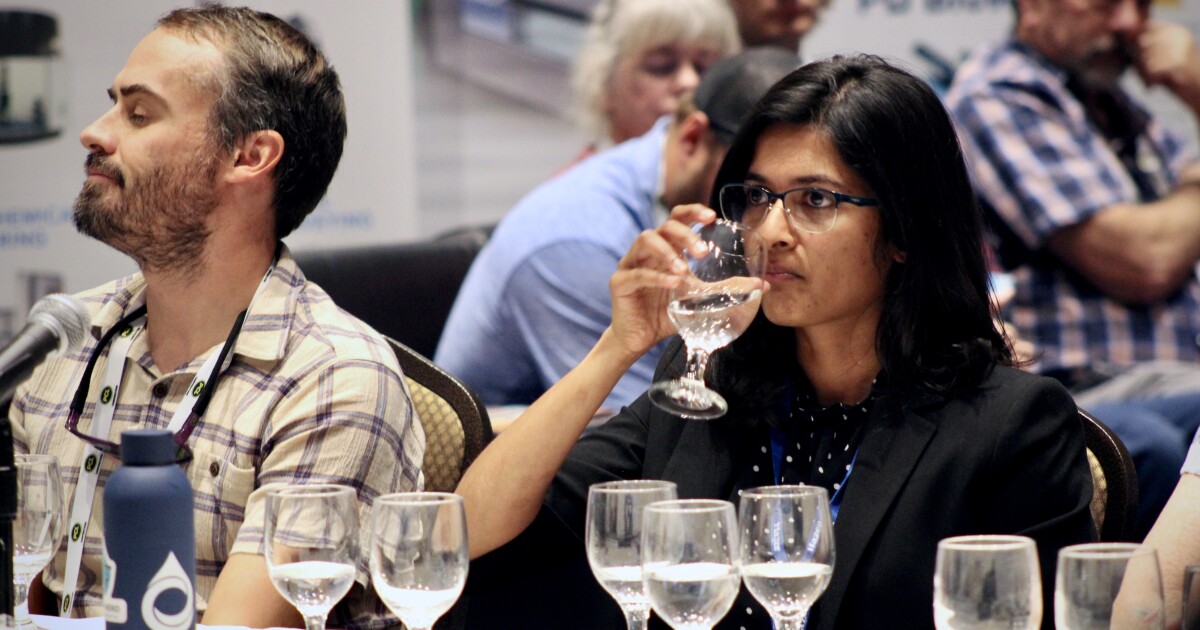 Every time you turn on the faucet, you become the last stop on a complicated journey.

Water from snow and streams collects in lakes and reservoirs, and cities pump it through complex filtration systems to make it pure enough to drink. The special balance of invisible minerals in each pour from your kitchen faucet creates subtle differences in each glass. You could call it the terroir of tap water.

In a busy hotel ballroom, surrounded by display stands displaying the latest pipes, pumps and filters, a panel of judges gathered to spot these differences.

I was one of them.

The American Water Works Association assembled a group of water works for their regional meeting in the Rocky Mountains in the ski resort of Keystone. Here we put tap water to the test, blind tasting samples from six cities across Colorado to crown a winner.

I’ll be honest, I don’t know much about tasting water. I’m an avid water lover, that’s for sure. Just ask any waiter who’s made four or five round trips to refill my glass during dinner, or any of my friends who rarely see me without my liter of Nalgene. I drink enough water to make a camel blush, but my taste buds are nowhere near refined enough to tell the difference between Denver and Durango water.

Luckily, the panel was packed with experts. Besides me, a reporter for the water hammer, there were people who made a career out of studying the taste and smell of water. One of them was Victor Sam, an engineer at the consulting firm Stantec.

I leaned to my right, where Sam was sitting, for some pre-contest advice: What should I even look out for?

“Overall, you just want to have an enjoyable experience,” he said. “Does it get you down? Do you like it? Does it feel good? But from a more scientific part of it, you can judge by the mouthfeel. Is it slippery or grainy? Is it maybe dry? So it’s like a wine tasting.”

The organizers of the event brought with them a “taste and smell wheel,” a neatly charted list of all the notes you could get out of a glass of water. There was chlorine and bleach, of course, but also many of the same terms you hear on a Saturday afternoon in Napa Valley—fruity, grassy, ​​and earthy.

The wheel wasn’t much help to me and the judge sitting to my right.

Colin Chung, a board member of the American Water Works Association, is a celebrity in the area. Nevertheless, he is neither a scientist nor a sommelier.

While the tap water selection was by no means wine, it was treated with the same ceremony and elegant touch as a beautiful Cabernet.

The judges opened heavy glass bottles brought to the competition by city water companies and decanted samples into stemmed glasses. Each judge received six, along with a score sheet on which we recorded scores from one to ten.

I carefully sipped a little from each glass. Not much was noticed in the early stages. I could tell that one sample differed from another, but couldn’t describe exactly how. Sam, the taste and smell expert, said that great-tasting water is typically full of minerals.

“When you actually drink pure water,” he explained, “a lot of times it doesn’t taste good because you’re just drinking H2O — no minerals — and you’re basically tasting your own tongue.”

Because of this, he said, bottled water makers will boast about added minerals that make their water taste more “slaking” and less like your own tongue.

After a first pass at the six waters, it was time to do a second loop and score a few points. It’s no small feat when each tastes so refreshingly bland. It was difficult to clean my palate between rehearsals when the usual palate cleanser is what I should judge. To help, the organizers put a few pods of saltina on the table.

I made a few attempts to describe the taste of water in the comments section of my review sheet.

“Smooth, soft, airy.” That’s not saying much, I realize, but they’re all pretty positive comments. So “simple” is I assume, and I used that term for Sample D.

The only one that received negative comments was Sample F, which I called “thin and rubbery.” Expert Sam agreed.

As an added consolation from my non-expert neighbor Chung, I asked if he picked up any of the nuances we saw highlighted in the taste and smell wheel.

“I try and I try to differentiate between the two,” he said. “And that’s very difficult to do at the moment.”

But then, on my third or fourth sip from the Sample E glass, I had a breakthrough. Finally an unmistakable taste. citrus. The slightest whisper of tangerine or grapefruit. Like a tenth of a La Croix.

“I think that’s what gave me the most smoothness,” he noted. “Did you eat something sweet for lunch?”

Having eaten nothing but saltines since my breakfast burrito, I was elated to have caught something so subtle even my eagle-eyed (anteater-nosed? hummingbird-tongued?) neighbor couldn’t.

It was only a few minutes later when that cheer broke out over us. Imagine my surprise when a routine key check of my pockets revealed a forgotten tube of sweet tangerine chapstick.

After watching the other judges hand in their score sheets, I scribbled down some shot in the dark scores and handed in my sheet, dejectedly reconciling my newfound cluelessness when it came to drinking my favorite drink of all time investigate . The organizers carefully counted the votes and forwarded these results to the emcee.

The Western Slope community is a well-watered oasis in the desert. It’s the first decent town you come across on the drive west from the mountains. The dramatic peaks of the Rocky Mountains and lush valleys below slowly unravel into dusty cliffs and sprawling red-earth deserts as you near the Utah border. Grand Junction’s city pipes are filled with melted snow before it can flow further south.

After the dust settled, I caught up with the water board of the victorious city, and they gave full credit to their location.

At the end of the day, that could have been enough to make the difference. Evaluating water, or even finding that particular brand or city faucet that appeals to you, is far from an exact science. Just ask Susheera Pochiraju, one of the other judges. She’s an environmental engineer at Hazen and Sawyer and literally has a Ph.D. The presenter dubbed her “Dr. taste and smell.”

Pochiraju said that tap water can be judged well even without specialist knowledge.

“I don’t think it should have any flavor to speak of,” she said. “It just had to taste clean and not dry out your mouth. Nobody needs a Ph.D. All we need is to calibrate ourselves.”

Next, Grand Junction will bring its water to the American Water Works Association’s annual meeting in Toronto, where it will compete against the tastiest faucets from across the continent.

This story is part of the ongoing Water in the West coverage produced by KUNC and supported by the Walton Family Foundation.