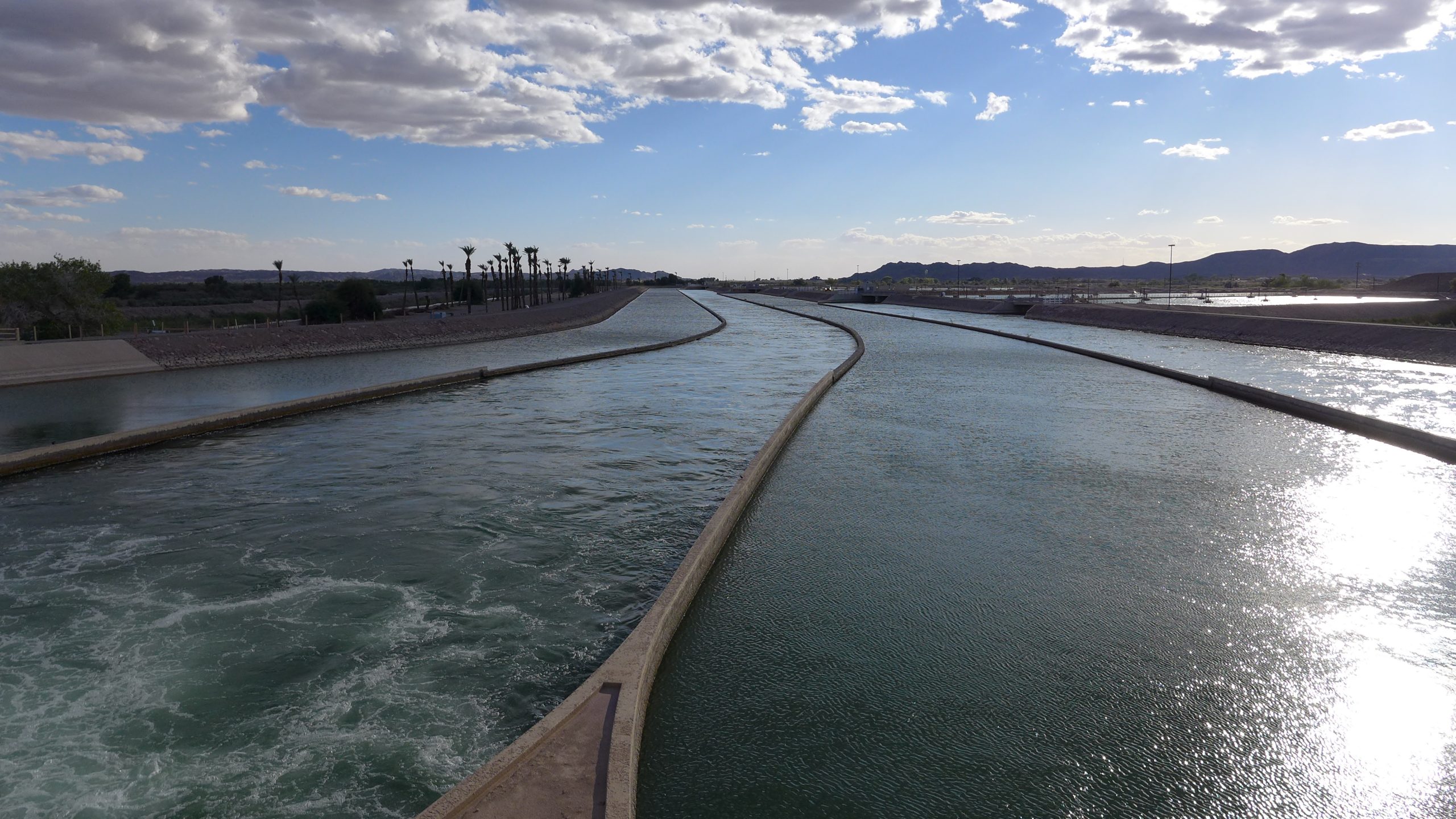 Staff and board members of the Glenwood Springs-based Colorado River Water Conservation District this month, along with other water managers from across western Colorado, visited the lower basin states — Nevada, Arizona and California — on what they called a fact-finding tour.

The tour took participants by bus from Las Vegas through the verdant alfalfa fields of the Fort Mohave Indian Reservation, past the major diversions serving the Central Arizona Project and Southern California’s Metropolitan Water District, and into the hot, agricultural ones Areas below sea level of the largest water user on the river: the Imperial Irrigation District. Among the approximately 50 participants on the three-day tour were Kathy Chandler-Henry and Steve Beckley, River District board representatives from Eagle and Garfield counties. Pitkin County Representative John Ely did not attend.

The River District’s mission is to protect, conserve, use, and develop the water bodies in its 15-county area of ​​western Colorado and protect the water to which the state is entitled.

With the country’s two largest reservoirs — Lake Powell and Lake Mead, which store water in the Colorado River — at record lows threatening hydroelectric production and being urged by the federal government to protect, it’s for Westerners Colorado’s more important than ever to understand how the water in the lower basin is used, said Andy Mueller, general manager of the River District.

“We need to be able to understand the interests of[the lower basin]and their needs so that we can find ways to meet their interests while protecting our own,” he said. “A system is in danger of collapsing and we are an integral part of it.”

An oft-repeated fact about the Colorado River is that it supplies water to 40 million people in the Southwest. But perhaps an even more striking statistic is that 1 in 17 people in the U.S. — approximately 19 million — get their water from Southern California’s Metropolitan Water District. About half of that comes from the Colorado River.

Since 1941, the MWD Whitsett Pumping Station has taken water from Lake Havasu and pumped it into the Colorado River Aqueduct, where it then flows 242 miles into urban Southern California. The Water District spans 26 parishes and six counties.

The future of providing enough water for all of these urban customers could be something called direct potable water reuse — MWD calls it raw water augmentation — which would allow them to recycle wastewater into potable water instead of dumping it into the ocean. MWD is testing this concept at its Pure Water Southern California demonstration facility in Carson, California, which was the final stop on the tour.

MWD is working to use the recycled water for industrial purposes and groundwater recharge, and hopes to eventually deliver it to local residents’ taps. The water utility could have a preliminary part of the project online by 2028. This new supply of recycled water could meet about 10% of MWD’s needs, according to Rupam Soni, MWD’s community relations team manager.

“It gives us so much operational flexibility and water reliability because this supply is available to us come rain or shine, it is climate resilient and that is very important to us right now with climate change and the challenges it is putting on our imported supplies. ‘ said Sony.

Forage plants are No. 1

While it’s true that much of the country’s winter produce, particularly lettuce, comes from farmers in the lower basin, the #1 crop grown using Colorado River water is forage crops: alfalfa and various types of grasses to round that to feed cattle.

The Imperial Irrigation District uses 3.1 million acre-feet of Colorado River water annually. In comparison, the entire Upper Basin (Colorado, Utah, New Mexico, and Wyoming) consumes between 3.5 and 4.5 million acre-feet per year from the Colorado River. An acre-foot is the amount of water needed to cover one acre to a depth of one foot, and is enough to support one or two families for a year.

Forage crops also make up most of what is grown in the upper basin. But growers in the high valleys of Colorado can expect about two cuttings a year, while much of the lower basin grows hay year-round and receives seven to nine cuttings. This means that switching to less thirsty forage plants in the lower tank could have a greater impact on the amount of water used.

In Colorado, some irrigators are experimenting with growing forage crops that use less water to adapt to a hotter, drier future.

Kremmler rancher Paul Bruchez, a representative for the Colorado Water Conservation Board, is testing test plots on his family’s ranch. He grows sainfoin, a legume with similar nutritional value to alfalfa. Bruchez, a participant in the tour, said some lower basin water managers and growers have expressed interest in meeting with him to learn more about growing less thirsty crops.

Bruchez emphasized that the conversion of forage crops in the upper basin is not about supporting Powell and Mead with water saved from farming, especially since there is currently no demand management program to account for these water savings. It’s about survival.

“People just don’t have enough water to irrigate the way they used to,” he said. “They’re just trying to make a living and stretch their waters to go further.”

In the past two decades, the Colorado River has lost almost 20% of its flow. Part of that is due to the ongoing drought, the worst in 1,200 years, which means less rainfall. But about a third of that loss is due to higher temperatures caused by climate change, according to researchers. Decreased river flows mean less water ending up in Lake Powell and Lake Mead.

These reduced upper basin discharges mean that water users may have to adjust their operations as less water is available to them. If there is less water in the stream, younger users may be cut off and older users may not be able to absorb their full amount. Currents can be particularly inadequate during the late summer and early fall irrigation season, and some water users are at the mercy of local dry conditions.

“Our farmers in particular live in this changing hydrology and we have learned to adapt to climate change,” said Müller. “In the lower basin, their farming and outdoor landscaping are absorbing more water due to the hotter temperatures, so they’re just demanding more from the reservoirs.”

Evaporation loss in the lower reservoir not taken into account

The thing about building huge reservoirs in the desert is that some of the water evaporates into the hot, dry air. In the upper basin, these evaporative losses from the Colorado River Storage Project reservoirs are accounted for and billed as part of consumptive use to each state based on its water allocation.

For example, as set out in the 1948 Upper Colorado River Compact, Colorado’s allocation of water from the upper basin is 51.75%. Therefore, the state covers 51.75% of evaporative losses for Blue Mesa, Flaming Gorge and Lake Powell. This is not the case in the lower basin, where evaporative losses in reservoirs are not accounted for.

Upper basin water managers have long said this accounting is unfair and allows for overuse of the lower basin.

“We require that (the lower pelvis) be treated the same as we are so that the system and the playing field are balanced,” Mueller said. “Once we’re at a balanced gaming table, we can start looking at how we’ll work going forward, but that’s really difficult when the rules they’re playing by down here allow for so much more water usage than what we have upstairs in the pool.”

The Upper Basin may finally be making headway on this one, as at least one Lower Basin water utility has joined the rallying cry. In an August letter to federal officials, John Entsminger of the Southern Nevada Water Authority recommended that each lower reservoir contractor be billed for evaporative losses so “the lower reservoir can reduce its reliance on excess water from the upper reservoir to balance the reservoirs.” “.

A later study by SNWA found evaporative and transit losses of about 1.5 million acre-feet each year downstream of Lee Ferry, the dividing line between the upper and lower basins, which lies just downstream of Lake Powell’s Glen Canyon Dam.

“We have separated the water use in the lower basin from the hydrology,” said Müller. “When you have a reliable water supply for 50 years, you don’t think about the fragility of the natural system that supplies that water.”

Aspen Journalism reports on rivers and water in association with The Aspen Times.