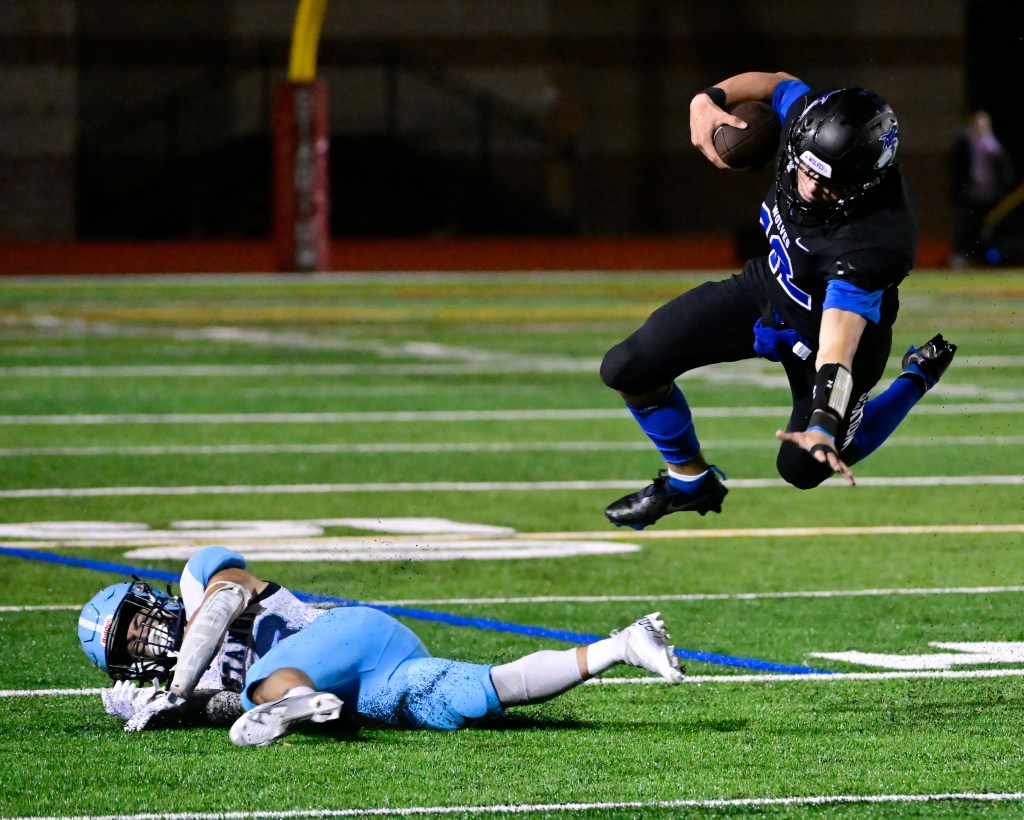 As the first signs of winter sweep across the state of Colorado, the high school football season has entered its final three weekends. With eight teams remaining in each of the state’s three largest classifications, here’s a preview of what to look for:

No. 9 ThunderRidge (11-1) in No. 1 Cherry Creek (9-2), 1 p.m.*: The duel between precocious freshman QBs DJ Bordeaux (T-Ridge) and Brady Vodicka (Creek) is rightly the headliner. But it’s the teams’ ferocious pass rushers that will likely decide this game. Creek may have the state’s top two edge rushers in top FBS talent Blake Purchase (Oregon Commitment) and Chase Brackney (Iowa). But the T-Ridge defensive line, led by senior DE Kaden Shouse, has no shortage of playmakers itself, averaging nearly three sacks a game.

No. 5 Pine Creek (9-2) at No. 4 Grandview (9-2), 1 p.m: Pine Creek squeezed the best of Legacy last week with a 30-24 win that led to two takeaways in the fourth quarter. The Eagles will need a similar effort against a Grandview roster led by junior QB Liam Szarka with dual threats (2,315 total yards, 30 TDs passing/rushing) and a strong defense that’s knocking out two of their last three opponents and Cherry Creek on 21 points keeps upset in a week 10 upset.

No. 7 Regis Jesuit (7-4) at No. 2 Valor Christian (9-2), Friday 7 p.m: Valor isn’t just playing for a fifth place in the 5A semi-finals. The Eagles also seek revenge on a Regis team they defeated in an overtime thriller in Week 1. The biggest difference between then and now: Junior QB Asher Weiner has taken the reins of a Valor offensive that’s on the rise under first-year coach Bret McGatlin. Regis has won five of six himself, including a 63-28 win by Fossil Ridge last week.

No. 6 Columbine (10-1) in No. 3 Ralston Valley (9-2), 1 p.m: For the second time in four seasons, these Jeffco League rivals meet in the playoffs, weeks after RV handed Columbine their only loss of the regular season. In 2019, the Rebels won the rematch and advanced to the 5A Finals. If they want to do the same thing again, they’ll need to finish rides against an RV defense that kept them at a season-low 13 points in Week 7. 12) is a handful. So did RV QB Logan Madden (1,910 yards by) and RB Diano Benallo (1,123 yards).

#8 Vista Ridge (8-3) at #1 Palmer Ridge (11-0) Friday 7 p.m: Four-star QB Brayden Dorman (3,658 yards, 49 TDs passing) and senior targets Brandon Hills (75 receptions, 1,519 yards) and Keyshawn Dooley (69-1,216) get one last shot at Palmer Ridge. Wolves nearly upset their league rivals in their regular-season finals, but the Bears defense shut out Vista Ridge in the last quarter and got two TDs from senior Nathaniel Robinson to walk away with a win. After losing to the Bears twice in the last two seasons, could the third time be the appeal?

No. 5 Montrose (9-2) at No. 4 Loveland (10-1), Friday 7 p.m: Loveland conceded for the first time in a month in last week’s 35-21 win over Dakota Ridge. Still, the Red Wolves controlled this game from start to finish. Montrose, meanwhile, was sidelined by Golden in a 47-43 thriller. In the face of Loveland’s fire-breathing defense, can the Red Hawks summon the same offense, which has averaged 46.7 points in their last nine games (all wins)?

No. 7 Heritage (8-3) in No. 2 Broomfield (11-0), 1 p.m.*: In another rematch of league rivals, Broomfield gets a heritage team they beat 17-13 in Week 10. Both defenses were without lights throughout the fall. OLBs Nick Long (16.0 tackles for loss) and Cade Kunz (14.0) lead a heritage unit that’s conceding just 7.2 points/game since Week 3, while senior DE Garrett Keeler (17.0 TFLs) and second CB Mikhail Benner (7 interceptions) lead Broomfield Defense with three shutouts and 34 takeaways.

No. 11 Erie (8-4) at No. 3 Ponderosa (9-2), 1 p.m: After beating No. 6 Denver South 35-10 in the Round of 16, QB Blake Barnett and the Tigers, on balance, get a rematch with a Ponderosa team that gave them the Week 1 deal 39-27. That Ponderosa win, however, came with a healthy Zach Stryker snapping, and the senior QB has played sparingly since suffering an injury in mid-October. While sophomore Max Mervin has been producing in his absence for the past two weeks (347 total yards, 7 TDs passing/rushing), Stryker’s return would be a welcome counterbalance to Erie’s powerful attack.

No. 9 Evergreen (9-2) at No. 1 Roosevelt (11-0), 1 p.m.*: Roosevelt’s buzzsaw tore up every 3A team it faced this fall, with only 5A Highlands Ranch able to stay in the single digits. Now, after a 41-0 win at Discovery Canyon, the Roughriders are getting an evergreen team that knocked off eighth-seeded Thompson Valley behind a dominant defensive display that even included a safety. More of that is needed against Roosevelt, who is averaging 40.9 points/game.

No. 13 Palisade (5-6) vs. No. 5 Green Mountain (11-0), 1 p.m: Those paying close attention knew that Palisade was a potential giant killer despite his under-.500 record – something the Bulldogs proved with a dramatic 14-7 win over fourth-seeded Northridge in last week’s opening round. Pulling off another stunner will not be an easy task against the Rams, whose defense is among the stingiest in 3A with six shutouts, including Resurrection Christian’s 58-0 demolition last week.

No. 11 Frederick (8-3) at No. 3 Lutheran (9-2), 1 p.m: A week after a late-game collapse at George Washington potentially cost Frederick a home playoff game, the Golden Eagles responded with 346 yards and six touchdowns in a No. 6 Summits. The task only gets harder this week with a visit to Lutheran, who are yet to lose to a 3A team this fall and are averaging 41.9 points/game. The Lions have a quarterback who has thrown for over 2,000 yards (Ryken Daugaard), a running back who has rushed for over 1,000 yards (Ryan Kenny) and a receiver with over 1,000 yards receiving (Joe Ciccio).

No. 10 George Washington (10-1) at No. 2 Durango (10-1), 1 p.m: Armed with two 1,000-yard runners in Marcellus Honeycutt and Marquevios Lee and an explosive CSU-bound receiver in Silas Evans (32 receptions, 605 yards), GW has created an offensive juggernaut in East Denver. Now comes a trip to Western Slope, where a Durango defense awaits with 25 takeaways, 38 tackles for losses and 87 points allowed in 10 hard-fought games.

*All games Saturday unless otherwise noted.