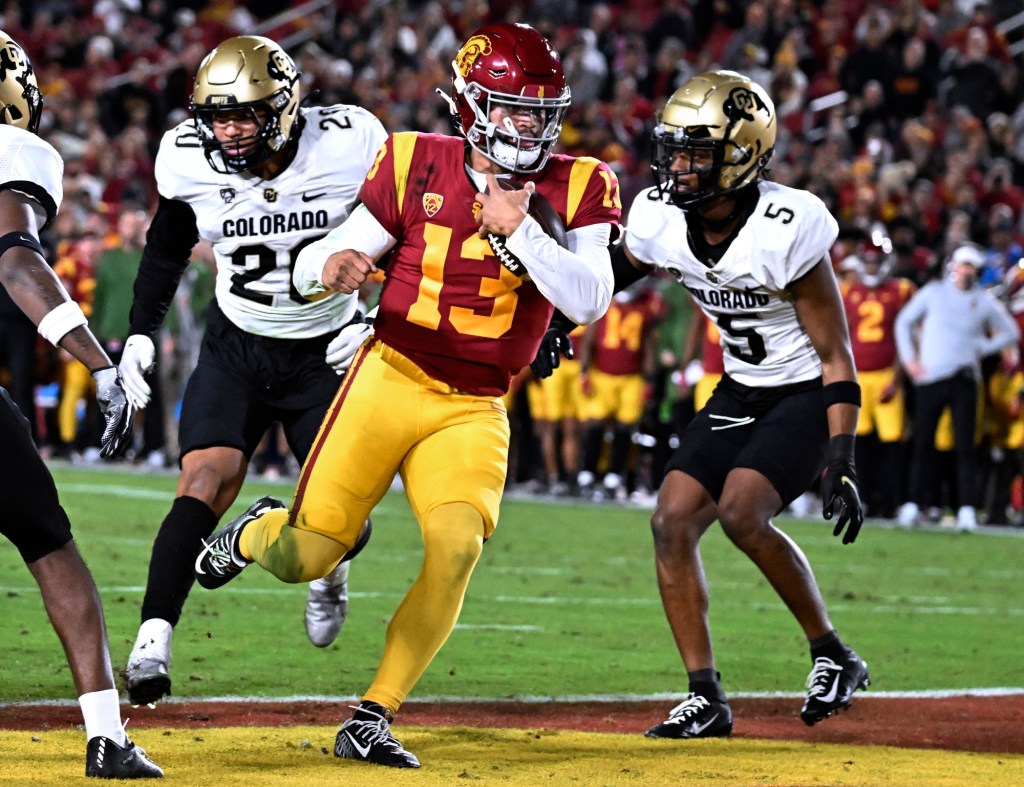 As the second quarter began, USC started playing like USC.

Despite a good start, Colorado was beaten 55-17 by the eighth-placed Trojans at the Los Angeles Memorial Coliseum.

USC star quarterback Caleb Williams shrugged off an early interception to throw for 268 yards and three touchdowns, and he also ran for two touchdowns.

CU’s Alex Fontenot had his first 100-yard play in nearly three years (108 yards on 20 carries), but the Buffs couldn’t get anything through the air. JT Shrout completed 11 of 21 passes for 124 yards while throwing an interception and losing a fumble. Shrout only had 46 passing yards in the first three quarters.

The Buffs gave up a season-high in points to surpass 42 points in their fourth straight game, but made an impressive and surprising start against the seventh-best offense nationwide.

Two of USC’s first three possessions ended in punts after going three-and-out. The other ended with Williams being picked off by Buffs second member Nikko Reed — just the second interception of the season for Williams.

After his interception, Reed knocked the ball down in celebration and was flagged for unsportsmanlike conduct. That proved costly as it forced CU to start on his own 12 yard line.

On the first down, Shrout was pressured and threw the ball away. He was flagged for intentional ground contact and because the foul occurred in the end zone, USC received a safe and went 2-0 up.

Late in the first quarter, CU hit a 28-yard field goal from Cole Becker to take a 3-2 lead. It was only the second time this year that the Buffs led into the second quarter.

CU held USC to just eight yards of offense in the first quarter, but that changed quickly. The Trojans gained 24 yards on third and 19 in the first game of the second quarter, and Williams scored his first rushing touchdown from 2 yards nine games later. USC also converted a third-and-23 during that possession.

Just three games after Williams’ goal, Shrout lost a fumble and USC took over at the Buffs’ 8-yard line. Two games later, Williams ran into the end zone from four yards to give the Trojans a 16-3 lead.

USC went into halftime with a 26-3 lead, but CU came back briefly in the third.

Fontenot completed a nine-play 53-yard drive and a 3-yard touchdown run to reduce the deficit to 26-10 with a 5:49 to play in the third game. Fontenot had seven carries for 51 yards on that drive.

However, over the next 5:22, USC received two touchdown passes from Williams, which were wedged around a shrout interception. That went into the fourth quarter at 41-10 and the game was out of reach for the Buffs.

The Trojans’ Raleek Brown added a 25-yard touchdown catch early in the fourth to give USC a 48-10 lead.

With 7:22 left in the fourth goal, Shrout hit an 8-yard run — the first touchdown run of his collegiate career.

Darwin Barlow capped the goal with a 3-yard TD run for the Trojans in the last minute. After gaining just eight yards in the first quarter, USC finished with 531.

Course of the game: Cornerback Nikko Reed had the best game for the Buffs when he intercepted a pass from Caleb Williams midway through the first quarter. Reed battled former buff Brenden Rice for the ball and walked away with just Williams’ second interception thrown this season.

turning point: USC opened the second quarter with a touchdown and then started rolling after Buffs’ quarterback JT Shrout fumbled three games later. That gave the Trojans the ball at the CU 8 and they scored two games later to start the loss.

Top 3 buffs of the game

1. RB Alex Fontenot: He finished for 108 yards and a touchdown on 20 carries, his first 100-yard game in almost three years.

2. LB Josh Chandler-Semedo: Finished with eight tackles, including a half sack.

3. CB Nikko Reed: Provides solid coverage for most of the night and also picks up a USC pass. He added 110 yards on kickoff returns.