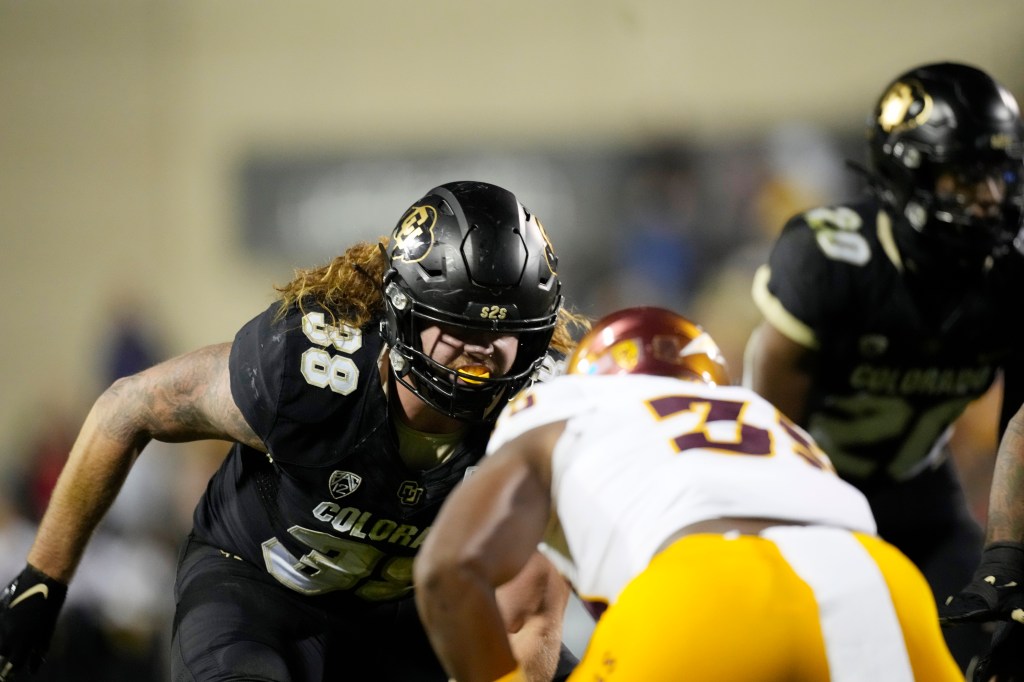 Many years ago, as a kindergarten student, Brady Russell and the rest of his classmates were commissioned to make Valentine’s Day cards.

“My kindergarten teacher called my mom at home,” Russell said, “and she said, ‘Brady says he can’t cut out hearts. He said he was made for football and nothing else.”

“Well, (football) has been on my mind all my life.”

Russell, who is now a senior tight end with the Colorado Buffaloes, has blossomed into a more respectful young man than he was then, but his love of football hasn’t faded. As Russell nears the end of his CU career, his lifelong dream could be just around the corner.

For Russell, it’s an opportunity to play two more games for the team he grew up with, but it’s also another opportunity to showcase his skills for NFL scouts — and they’re paying attention. He was invited this week to play in the NFLPA Collegiate Bowl in January.

“[Playing in the NFL]has always been a goal of mine and I’ve always known in my mind that I was capable of it, even when I had to come in here,” Russell said. “A lot of people have been like, ‘Oh, when did you start thinking you could make the NFL?’ Since I was six years old, five years old, four years old. That’s what I wanted to do with my life, forever.

“It was never something I would undersell because other people didn’t see it in me. But it’s really encouraging to have validation from other people who are now seeing it too, instead of just myself.”

Russell, who received a scholarship in his second season at CU, has caught 73 passes for 758 yards in his career, but NFL scouts who have been showing up at CU in recent weeks have been eyeing his blockage. He is seen as a potential next-level full-back.

“I think I have unique skills, similar to Kyle Juszczyk’s body type (San Francisco 49ers fullback) and stuff like that. Hopefully that translates well,” he said.

The 6-foot-3, 250-pound Russell has been trying to prepare for an NFL career for years.

Matt Russell, one of the greatest linebackers in CU history and Russell’s uncle, has been in Russell’s corner for years. Matt, who played in the NFL from 1997-1999, has been in NFL scouting for more than 20 years. Currently, Matt is a senior human resources director with the Philadelphia Eagles. From 2009 to 2020 he was in the front office of the Denver Broncos.

“It obviously helps to have my uncle at the level he’s at,” Russell said. “I get a lot of feedback on what I’m doing well and what I could do better.”

Matt told his nephew a few years ago that few tight ends in the NFL are good at both receiving and blocking, so Russell has tried to excel in both.

“Hopefully I can bring that versatility that you don’t see a lot of in the NFL,” Russell said.

Another skill Russell has worked on for years — although he doesn’t do it for CU — is snapping for punts and field goals.

“When I was in third grade,[Matt]said, ‘If you want to make the NFL, do it really well and you can make it,'” Russell sadly. “Okay, well, I can do that. So that’s what I’ve been doing ever since.

“I shoot pretty frequently throughout the offseason just to maintain skill because versatility is the key to lasting in the NFL.”

Before he turns his full attention to the NFL, however, Russell is enjoying his final moments in the buffs. This has been a tough year at CU, but Russell has found a way to enjoy his latest campaign.

“It’s kind of weird because even though it’s our worst season, it’s probably the tightest group of guys that’s the most fun we’ve had,” Russell said. “Even in training last year when we were 4-8 there were times where we were just miserable. But the team (this year) just stuck together so well and despite our circumstances we were able to have fun all year round and bring joy every day.

“It was a really cool thing to see that your circumstances don’t necessarily have to dictate how you feel, how you act, which is something I’ve always tried to live by. The whole team kind of takes it.”