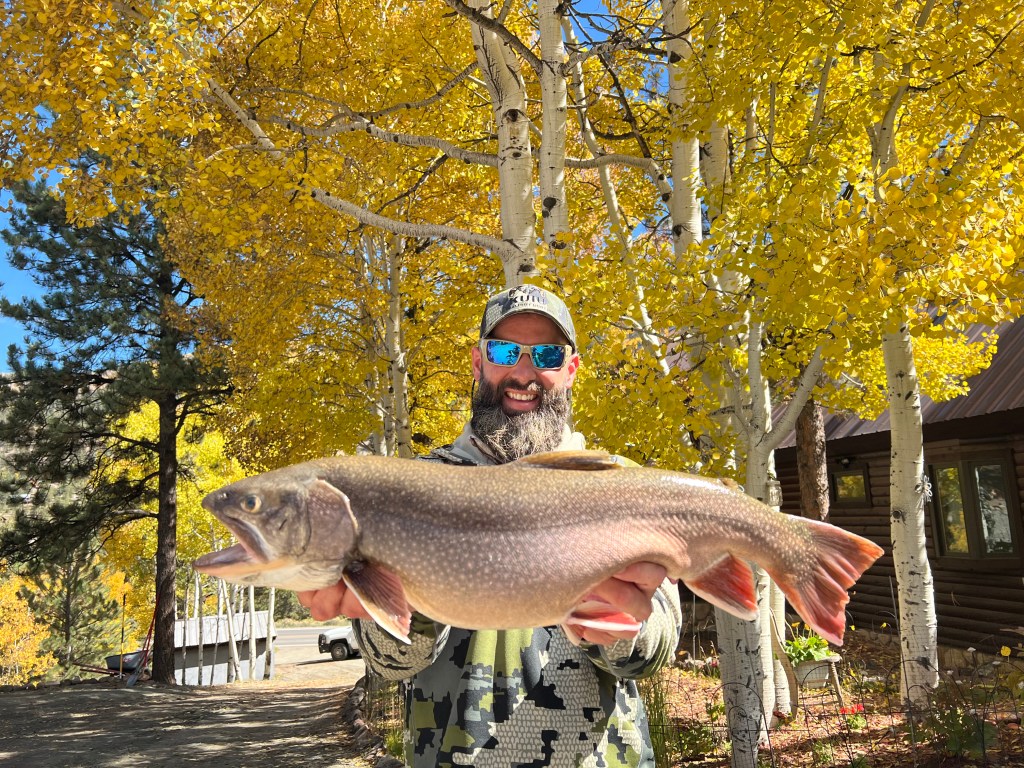 Before sunrise on that fateful October morning, Smiley suddenly felt the urge to take his fishing gear on a long, arduous hike to Waterdog Lake in the Uncompahgre National Forest near his home in Lake City. He started the four-mile hike just before 6 a.m., reached the alpine lake about three hours later after a 2,400-foot climb, and eventually caught the largest brown trout in Colorado history.

The record catch was announced Tuesday by Colorado Parks and Wildlife. It weighed eight pounds, nine ounces and was 26.25 inches long. Smiley was stunned when he caught his first glimpse.

“When it came to the surface, it was one of those moments, ‘Oh my god, what’s up, look at that thing,'” Smiley recalled in a phone interview. “I was kind of in shock for a second.”

It wasn’t his first record catch, however. In 2019, Smiley caught a lake trout in Utah that measured 48 inches long and weighed just under 53 pounds, setting that state’s catch and release record for that species. And in 2003, he caught a lake trout at Blue Mesa Reservoir near Gunnison that broke the existing Colorado record. However, this one was eclipsed a few weeks later.

What’s his secret? Anglers never tell, but he believes the more time you spend fishing, the better chance you have of landing a big whopper.

“More than anything, I’ve probably put more time and effort into going extreme than most people would be willing to do,” said Smiley, whose brother Steve is the senior men’s basketball coach at the University of Northern Colorado. “And luck is still part of it. You can spend all the time in the world making this stuff and there’s no guarantee the right fish will ever bite. But the more opportunities you give yourself, the more chance it will happen.

“My friends think I’m crazy for spending so much time on these things,” he added.

Smiley had a bit of luck too. After a few hours of fishing near the tree line at 11,130 feet, he decided it was time to return home to football.

“Not 20 seconds later this fish bit and I couldn’t believe it,” said Smiley. “If I had stopped 20 seconds earlier, I would never have had that bite. You just never know.”

Smiley estimates he has hiked to this lake about 35 times in the past nine years, thinking that a record brown trout might be waiting there.

“Every time I walk about halfway into this lake, I question myself,” Smiley said. “Am I crazy? Am I actually going to do this trek again? It doesn’t always get rewarded for that, but I’ve been rewarded at least a few times in my fishing career. It sure is nice when it happens.”

Smiley works for Favorite Fishing Rods, a rod and reel company for which he is Sales Director. They allowed him to work remotely before COVID-19 made it common, so he moved to Fairplay from Denver to be closer to the upland fisheries. He has since moved to Lake City, a small town about 50 miles southwest of Gunnison.

“I don’t want to make it sound like these records are my ultimate goal, because they aren’t,” Smiley said. “If that’s the only reason I do this stuff, you’d be crazy. The experiences I had hiking these lakes and the things I saw – mountain lions, bears, you name it. I’ve seen pretty much everything. It was just a great passion for me. I feel more alive walking in these things than anything else.”

Subscribe to our weekly newsletter, The Adventurist, to get outdoor news straight to your inbox.