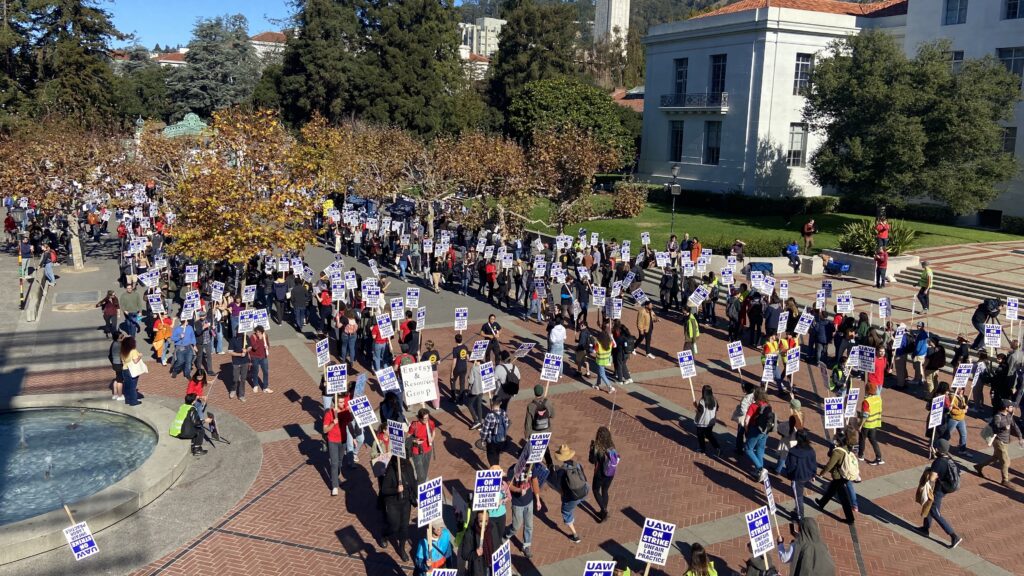 AAny other Monday morning, Josh Mesfin would have been in the lab operating on rats and finding new ways to help them heal from heart attacks — hoping one day to use the same tools to help humans.

But the UC San Diego fourth-year bioengineering student spent the day chanting and marching alongside academic colleagues who started a strike at 10 University of California campuses Monday, denouncing low wages that loudly Mesfin is making instant ramen a staple for many college students struggling to afford the area’s soaring rents.

“I’m not usually the type of person who works a lot for activists. It’s one of the first protests I’ve been to,” Josh said. “[But] You have to stand up for what’s right. It’s now or never at this point.”

A lot happened across the state. From San Diego to Davis, 48,000 graduate students, postdocs, and other academic staff halted their usual research and teaching activities, and many went on picket lines to demand better wages, childcare assistance, and other benefits.

For life science researchers, that meant putting aside mouse experiments, tending cells in the lab, and tinkering with DNA. Instead, they spent the day playing music, singing and raising signs to pressure a network of research universities that depend on their labor.

At UCSD, isolated protests scattered across campus eventually culminated in the hostage library, the university’s most recognizable landmark. And at UC Berkeley, faculty members danced, marched and sang to the music pounding, alternating Dolly Parton’s “9 to 5” and Aretha Franklin’s “Respect.”

“People are really excited; they’re determined,” said Hayley Bounds, a sixth-year neuroscientist with a Ph.D. student at Berkeley. “We are ready to fight this battle.”

The protests come after months of deadlocked negotiations between the UC system and the United Auto Workers.

Core UAW requirements include an annual minimum salary of $54,000 for graduate students and a minimum salary of $70,000 for postdocs, with annual adjustments based on experience level and cost of living. The union is also demanding a $2,000 monthly reimbursement for childcare and extended paid parental leave.

The UC system’s counteroffer was more modest. For postdocs, the offer includes an annual child care allowance of up to US$2,500 and a new salary scale with an average increase of 7.5% over the current one. And UC’s offer for graduate students includes an offer to cover tuition and other campus fees, as well as a 9% to 10% salary increase in the first year of a new contract, followed by a 3% annual increase for most students.

“UC believes its proposals were fair, reasonable and aligned with the union’s priorities and looks forward to continuing negotiations with the UAW and completing these contracts as soon as possible,” the university system said in a statement released online.

The nationwide strike revolves around many of the same issues that are driving life science researchers out of academia altogether, a seismic shift documented in a recent STAT News special report. The growth in the private sector has led to a mass exodus from academia, with fewer Ph.D. Graduates doing postdocs and more of them going into lucrative jobs in industry.

As of early November, 98% of UC’s academic staff tuned give their union the power to authorize a strike. But Mesfin said he and many of his colleagues had hoped a strike would not actually happen. A month-long strike, he said, could delay completion by several months given the time it takes to set up, prepare, and troubleshoot experiments. And as a Ph.D. As a student, he is less able than a postdoc to leave the academic world and enter the world of work directly.

Another concern? Retaliation by the faculty. While he said his professor supported him, he added that there was a general fear among students that they could be fired or otherwise punished for strikes (although the UC Faculty Council notes that academic staff does not fire for protest can become).

“The power dynamic between a [professor] and a student is crazy,” he said. “These dynamics inherently put a strain on graduate students.”

However, some faculties openly support the strike. Kay Tye is one of them. Her neuroscience lab at the Salk Institute includes UCSD graduate students, and Tye has told them that as long as the strike continues, lab meetings are no longer an opportunity to discuss science. Instead, they become social events revolving around eating desserts and making signs for the pickets.

And Tye plans to be right there protesting.

“Why should I as [principal investigator] benefit from the work of my graduate students but then not be there to support them?” she said. “It’s just a very dehumanizing way of looking at things. It is a mentor-apprentice relationship. It’s not slave labor.”

It is unclear how long these protests will last. Postdocs and graduate students do most of the work that drives university labs. Without their work, groups like Tye’s won’t be able to achieve much. Striking workers are paid $400 a week, barely enough to make ends meet.

Life science researchers and their colleagues in other departments are counting on them to outlast the UC system. The coming days and weeks will put this hypothesis to the test.