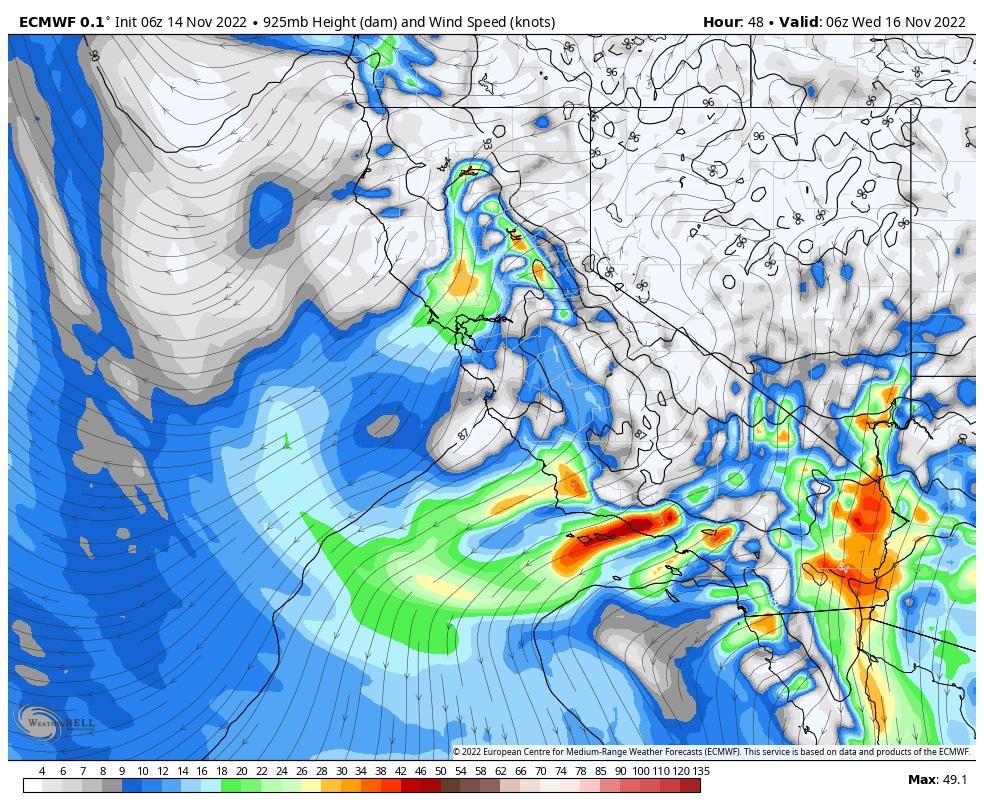 It’s a cold morning in the Bay Area, but temperatures will change a bit today. Warm, dry air enters the Napa Mountains and Diablo Range. This air accelerates as it enters San Francisco Bay, clearing any remaining clouds and fog in its paths.

It was only a matter of time before those dry, offshore, and northeasterly winds—also known as Diablo winds—appeared. Southern California will also see the return of the Santa Ana winds, while the Santa Barbara coast can expect sundowners along the Pacific Coast Highway.

With all the rain and snow we’ve seen over the past few weeks, how concerned should Californians be about new wildfires during this week’s wind event? Depending on what part of the state you live in, the answer will vary quite a bit.

The offshore winds are back

As a quick refresher on offshore winds, you need two ingredients for Diablo, Sundowner, and Santa Ana winds to develop. The first is a depression sliding into California. And that’s exactly what global weather models like the European and Canadian forecast for Tuesday and Wednesday. The catch is that the system must be dry enough for Diabos to bear fruit, for its winds to dry California like a blow dryer on wet hair.

That leads us to the second ingredient: time. Anyone who has dealt with frizzy hair knows that the longer you can dry your hair, the greater the chances for smoother results. When it comes to offshore winds, the longer they hit California, the drier the state’s soils become.

Based on the latest multi-model analysis of the European, Canadian and American weather models, these offshore winds are likely to start Tuesday and continue through Wednesday. In the Bay Area, this means that Napa, Solano, Contra Costa, and Alameda counties can expect outbreaks of Diablo winds during those two days. Luckily, the strongest of these winds are concentrated at higher altitudes and just barely meet the Diablo wind criteria.

It’s the equivalent of trying to dry your hair with a blow dryer on the lowest setting in under a minute. Sure, you’ll see a few patchy areas dry up, but most of it stays frizzy. In the case of California, our recent rain and snow events have left most of the state’s soil saturated. This means it takes a lot more than weak bursts of Diablo winds to raise fire concerns.

Unfortunately for Southern California, strong offshore winds — also known as the Santa Ana winds — will sweep into the region. Red flag warnings are in effect for the Santa Monica Mountains and Ventura County Mountains in Los Angeles, and high wind warnings are in place for the San Bernardino, San Gabriel and San Jacinto Mountains from 7 a.m. Tuesday through 7 p.m. Wednesday.

Rainfall along the Santa Monica Mountains and sections of the Santa Barbara coast was not as high as that of their northern neighbors such as the Santa Lucias and Santa Cruz Mountains. This means there is a low risk of new fires from some of the Santa Ana winds today and tomorrow.

For now, we’ll have to wait and see how this offshore wind event plays out across the state. But given all the moisture gains from September through early November, it looks like most of the Golden State has a moisture mantle thanks to reduced fire problems.

• San Francisco: Aside from a few wisps of fog in the Dogpatch and Hunter’s Point neighborhoods this morning, most San Francisco residents will wake up to a sunny Tuesday morning. Watch for a steady climb into the 60’s through this afternoon. Some of the city’s warmest spots, like Castro and Noe Valley, will rise into the mid-60s as plentiful sunshine and light northeast winds sweep down Mission Street.

The Sutro Tower will act as a dividing line between the warmer, drier air to the east and the cooler, foggier air to the west. The outer counties of Sunset and Richmond will remain closer to 60 degrees today thanks to a gentle ocean breeze off the Pacific.

So is this warmth here to stay? Not quite. Now that sunset is before 5 p.m., we can expect temperatures in the city to quickly drop back to the low 40s on the west side and mid 40s east of Sutro Tower tonight.

• Pacific Coast and Peninsula: Residents between Pacifica and Half Moon Bay will wake up to mostly sunny skies and morning temperatures in the mid-40s. Warm, dry winds from the peaks and mountains of San Mateo County will then push down the cool air along the coast. Temperatures will quickly rise into the low 60s by midday. Expect 10-15 mph gusts mainly along Highway 1, while some beaches in and around Half Moon Bay can hit 20 mph just after sunset. Temperatures will then quickly drop back into the 40s tonight.

A similar temperature trend is emerging for today as you head east from 280 towards Daly City, South San Francisco, Brisbane and San Bruno. Look for mostly sunny skies and highs in the mid 60s. Temperatures are closer to 60 degrees as you drive south on 101 toward Redwood City, Menlo Park, Foster City and Atherton — thanks to the weaker offshore winds on the peninsula’s eastern flank. Temperatures in San Mateo County will then drop to 40 degrees after sunset.

• North Bay: Bitter cold and freezing weather will return to much of Sonoma, Napa, Marin and Solano counties by sunrise. Be sure to bundle up this morning as weather forecasts put the region in the Petaluma, Napa and Sonoma Valleys at 30 degrees. Some of that cold air will settle over parts of Highways 29 and 101 and the Marin Headlands, but expect widespread 40s this morning as you approach San Pablo Bay.

The entire region will warm up quickly this afternoon as offshore winds sweep into the mountains of Napa County. These winds reach 10 to 15 mph in the valleys and 25 to 30 mph along the Vaca Mountains and St. Helena. Watch out for high temperatures in the upper 60s, while some spots north of Santa Rosa and Petaluma could hit the 70-degree mark before sunset.

A light breeze from San Pablo Bay this afternoon will cool the bay’s shoreline and bring towns along Highway 37 like Vallejo, Benicia and Cordelia closer to their mid-60s during the day.

But after sunset, temperatures drop back down to 30 to 40 degrees across the region, so have a coat handy.

• East Bay: Winds entering the East Bay hills this morning will eventually make their way to Oakland, Berkeley and most of the I-880 corridor. Gentle Diablo winds will blow up to 20 mph (32 kph) on some of the higher peaks, while winds remain calmer closer to the bay’s shoreline. Watch for a quick warm-up today as 30s and 40s climb into mid-60s from this morning. Temperatures are approaching the upper 60s east of I-680 in towns like Antioch, Brentwood and Walnut Creek, thanks to light winds infiltrating the San Ramon and Livermore valleys. After sundown, expect a return to the mid-40s.

• South Bay and Santa Cruz: A warm, dry day is in store for the Santa Clara Valley. San Jose, Cupertino, Alum Rock, Los Gatos and Robertsville can expect highs in the upper 60s as light offshore winds seep into the foothills. Watch out for gusts of 10 to 15 miles per hour in East San Jose and along the hills of Cupertino, while a gentle breeze from San Francisco Bay brought temperatures closer to the mid-60s in Milpitas and neighboring towns along the coast holds. Temperatures then take a nosedive after sunset, dropping to the low 40s in most of the valley.

If you’re heading south on Highway 17, have a sweater handy in the morning. Most of the Santa Cruz Mountains start in the low 40s, while some spots around Ben Lomond and Boulder Creek might drop into the upper 30s just before sunrise. Sunshine will then quickly push daily highs into the upper 60’s. Closer to shore, expect Watsonville, Capitola, Santa Cruz, and Davenport through the mid-60s, while a gentle ocean breeze off Monterey Bay kicks up gusts of 5 to 10 mph along Highway 1 between Santa Cruz and Davenport. Winds then ease after sunset, and temperatures throughout Santa Cruz County drop back into the 40s.

Gerry Díaz (he/she) is a weather forecaster for the newsroom of the San Francisco Chronicle. Email: [email protected] Twitter @geravitywave