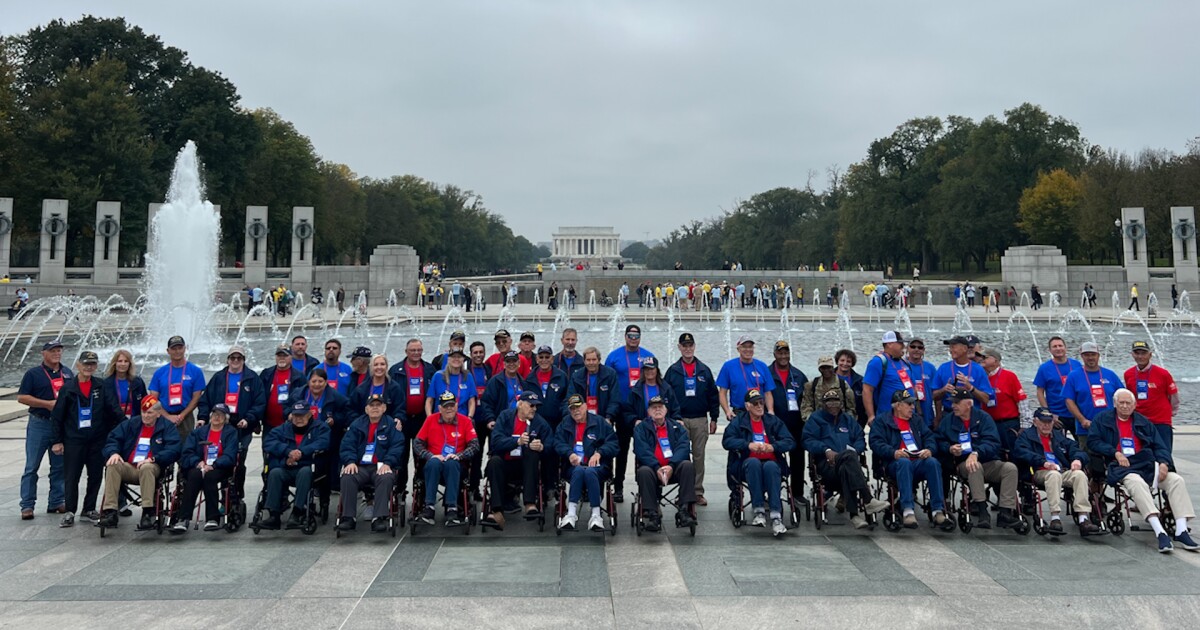 “I have never been here. I’ve always wanted to see a lot of those beautiful things,” said Roger Boardman, an Air Force veteran, of the military monuments scattered around our nation’s capital.

“I think veterans have built our country over the years,” said Mike Boardman, Roger’s son and a local firefighter. “What he taught me comes from my time in the military. It makes me very proud to be here with him.”

Navy veteran Jim McCall III was proud to travel to DC with two dozen other veterans, but it’s what he does at home that shows how proud he is to have worn a Navy uniform.

“I have a miniature statue on my doorstep at the retirement home of this one,” said McCall III, standing in front of the iconic Marine Corps War Memorial of soldiers raising an American flag in Iwo Jima. “Everyone has something in front of the door. Well, that’s mine, and I greet it every morning.”

Brothers Herb and Arnie Gerfen, both Navy veterans, served in the early 1950’s; Herb during the Korean War and Arnie the last six months of it.

“I joined Cal Poly in 1950 and was there about two weeks to play soccer. Then I got my orders to report to San Diego and that was it,” Herb said. “Freedom isn’t free. When people hear jets flying, a lot of people complain about it. We say that’s the sound of freedom.”

Brian Moore was the only World War II veteran to fly the honor flight. He personally enjoyed his first trip to our nation’s capital. He’d been there before, virtually.

“I’ve visited DC before with my Oculus, and the real DC is much bigger. It’s a lot more impressive,” Moore said. “I pushed my daughter around for a long time. Now she’s pushing me around.”

Monica Wahl, his daughter and guardian on the honor flight, accepted it and says she enjoys being the daughter of a veteran.

“Yes, it makes me proud,” Wahl said. “It’s really fun. We remember a lot of the stories he’s told us over the years.”

As I was talking to Brian, a man in army uniform stopped to shake his hand and said, “I just wanted to thank you for your service.”

And we all share the same sentiment: Thank you to every veteran for their service.

Honor Flight Central Coast California typically conducts two Honor Flights per year, one in the spring and one in the fall. If you or a veteran you know would like to apply, click here.