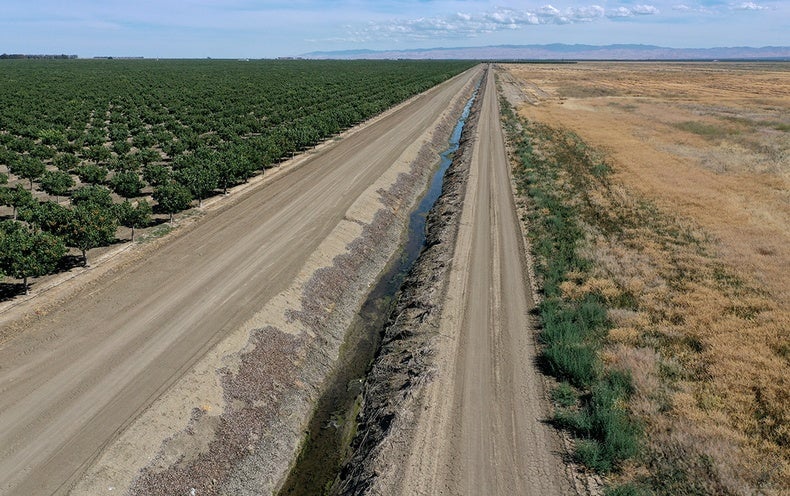 As glaciers covered the Sierra Nevada mountains multiple times over the past million years, the rivers that flowed down the mountains became increasingly powerful, cutting channels a mile wide and 100 feet deep into what is now California’s Central Valley. As the glaciers receded, meltwater rushed down the slopes at high speed, carrying with it abraded gravel and rock. As the current slowed along the valley below, the pavement fell out of the water column and filled the gorges. Long undiscovered underground, these “paleo valleys” are now being mapped using airborne imaging systems. Their detection could help with a modern problem: California needs to offset extreme flooding and drought, aggravated by climate change – by storing water underground.

Californians have long used groundwater as a backup supply when rivers are low. But surface water and groundwater are connected, so pumping the latter out of wells can lower rivers and streams even further. Groundwater levels have been falling for decades due to overpumping and engineering infrastructure that prevents natural replenishment, such as B. Dikes that prevent water from seeping through the bottom of the flood plains. Depleted Central Valley aquifers now have three times the capacity of California’s approximately 1,400 reservoirs.

Humans can help restore hydrological health by spreading water on the surface to percolate underground, a process called managed aquifer recharge. But clay soils make up 65 to 80 percent of the Central Valley, and water moves slowly through them. This is where paleo valleys (also known as incised valley fills) may come in handy. Because they are filled with gravel, they are more porous than clay soil and can absorb about 60 times more water.

During large storms, Californians have been able to contain flood waters and distribute them to the recent paleo valleys, which lie just below the surface. The water would be absorbed quickly and stored for long droughts. This would raise water tables over a wide area, make surface rivers stronger and healthier, protect fish in streams, allow people continued access to wells, and stop subsidence – a phenomenon that occurs when land crumbles because the water underneath has been removed. “These geological ‘fasttracks’ are the natural infrastructure we need to manage our groundwater resources,” says Stanford University geophysicist Rosemary Knight, lead author of a new study published Tuesday in environmental research letters.

Graham Fogg, a professor emeritus of hydrogeology at the University of California, Davis, first proposed using paleo valleys for managed groundwater replenishment nearly 40 years ago. He hypothesized that each of the dozen or so rivers that flow out of the Sierra Nevada has corresponding paleo valleys. But in a quarter-century of searching, he and his graduate students have only found three — using a lengthy method that analyzes tens of thousands of soil samples from wells. In the new study, however, Fogg, Knight and their co-authors demonstrated a faster way to find these valleys: flying a helicopter with an airborne electromagnetic imaging (AEM) instrument to “see” the subsurface. This technology distinguishes soil types based on their electromagnetic responses, similar to magnetic resonance imaging. The researchers used AEM to map one of the well-known paleo valleys that Fogg and one of his students had already found using ground data. “I thought it was important to find out if AEM would even detect these things,” says Fogg. “After these results, it will.”

Knight’s team used AEM data to create a three-dimensional map that shows clay in blue and sand and gravel in red. These maps will help researchers identify paleo valleys elsewhere, she says. Burke Minsley, a US Geological Survey geophysicist who was not involved in the study, says Knight’s data also adds important details about the valley’s geometry, depth and connection to other subsurface flowpaths — well beyond what borehole data can provide .

Since Knight and Fogg began this research several years ago to use AEM to search for a paleo valley, the California Department of Water Resources (DWR) has followed the scientists’ recommendation to conduct a reconnaissance project using AEM to map 100 depleted groundwater basins . Data collected so far from the larger but less detailed DWR project is still being processed. But Katherine Dlubac, project manager for the department’s AEM investigations, says things are “looking promising” for paleo valleys so far. “Charging is really important here in California,” she says. “It’s a high priority for us at DWR … to help local people get more information about their aquifers.” The state will go back and collect more refined data, Dlubac says, a process that could begin in the next six months.

Because paleo valleys are unusual in their capacity, size, and accessibility, Fogg and Knight hope tracts of land above them can be reserved as dedicated recharge zones. One reason humans have depleted groundwater is because the subsoil was terra incognita. That’s finally changing with these 3-D maps, helping people envision what lies beneath the surface of the earth and fulfilling Fogg’s decades-long vision. It’s “gratifying,” he says, “that people are taking notice and using the information.”