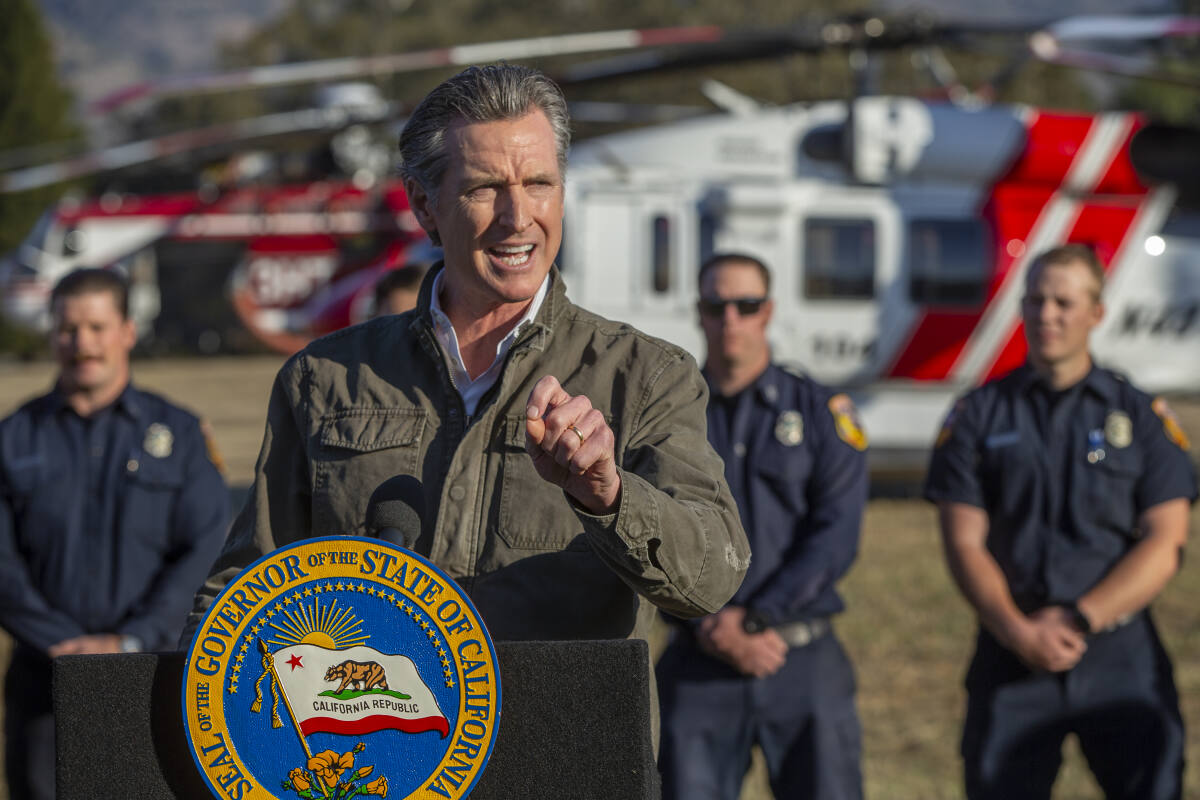 NAPA — Behind Gov. Gavin Newsom as he took to the podium Thursday to address the media and the Cal Fire personnel lined up behind him and the gleaming trucks and helicopters representing the state’s investment in firefighting equipment were intended to symbolize hills that had been scorched by the deadly Atlas Fire in 2017.

Wildfire is never far from conversation here in this flame-scarred region of Northern California, making Cal Fire Station east of Napa a natural setting for Newsom’s look back at everything his administration has done to improve fire prevention and resilience since he took office improve in 2019.

“As we all acknowledged, fire season is now year-round,” the governor said.

Still, a warming, drought-stricken California is far better prepared for this challenge than it was a few years ago, Newsom argued.

He had solid evidence to support the claim. The state has spent $2.8 billion over the past two years on equipment, fuel reduction, and hardening homes and communities.

Much of this was devoted to removing scrub in fire zones, primarily through prescribed burns. Cal Fire has completed more than 100,000 acres to reduce fuel consumption each year since 2019.

The state fire department had a break from mild weather this fall, giving staff an unexpected chance to tackle an additional 20,000 acres in the past two months, Newsom said.

“We recognize that we have not caught up on 100 years of neglect in this area,” the governor added. “And yes, before you state the obvious, let me state the obvious. We still have a lot to do.”

To that end, the state struck a deal with the federal government — “backed by a government that has stretched out its hand, not its fist,” as Newsom put it, comparing Joe Biden’s White House to Donald Trump’s. The goal is to relieve a total of 1 million hectares by 2025.

“Based on what we’ve just heard, I’m confident that we can do it,” Newsom said.

Much of the money spent on fire protection has gone into new equipment. Cal Fire currently employs 356 locomotives across California, according to Newsom. On Monday, the agency will put that back to 243 engines for the winter months.

Cal Fire has stocked up on a dozen Sikorsky Firehawk helicopters in recent years — they have faster response times and carry more water — and this year added new planes capable of flying night missions.

And in 2023, Newsom said, California will get the first of seven massive C-130 tankers.

This mobilization is already paying off, argued MEPs.

Marcucci, the local Cal Fire chief, cited the Old Fire as an example. A month and a half before this fire moved downslope from Atlas Peak and burned 600 acres in June, making it the largest fire in the North Bay of 2022, Cal Fire, in conjunction with Cal Fire, had completed work on a six-mile fuel break along the Soda Canyon Road completed the Napa County Fire Department and the Napa Community Firewise Foundation.

“And you can see where the fire on Soda Canyon Road pretty much ended,” Marcucci told Newsom during the fire department briefing. “It allowed firefighters to get in front of it. So the return on investment was immediate. The fire wouldn’t have gone out like this if we hadn’t been able to slow it down.”

No houses were lost in the Old Fire.

Not everyone would agree with the rosy assessment of Newsom and his team. A few news accounts slammed Cal Fire almost simultaneously in June.

The first, from the nonprofit newsroom CalMatters, accused the state agency of overworking its firefighters with mandatory 21-day shifts and forced overtime. The grueling wildfires of recent years, the report says, contribute to high levels of work-related injuries and psychological trauma. The result was an exodus from the agency, with 10% of Cal Fire’s permanent, non-seasonal workforce leaving the company in the previous year.