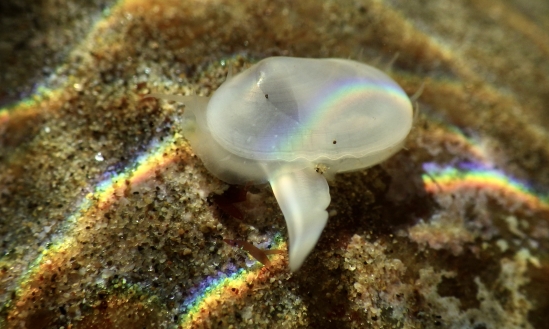 A species of mussel known only by the 28,000-year-old fossils it left behind has turned up alive and well off an American coast.

The small, translucent shell known as Cymatia cookiewas recently discovered tucked away in the rocky intertidal zone of southern California – a site that has been carefully combed by scientists for many, many years.

“It’s not all that common to find a species first known from the fossil record alive, especially in a region as well-studied as southern California,” says marine ecologist Jeff Goddard of the University of California, Santa Barbara.

Goddard himself has spent decades surveying California’s coasts for sea slugs, nudibranchs, and other invertebrates, but it wasn’t until November 2018 that he stumbled across two odd-looking, little white spots.

“Their grenades were only 10 millimeters in size [0.4 inches] long,” he says. “But as they stretched out and began waving around a bright white-striped foot that was longer than their carapace, I realized I had never seen this species before.”

Goddard took some photos and gave them to Paul Valentich-Scott, a curator of mollusks at the Santa Barbara Museum of Natural History. But even Valentich-Scott could not assign the species. He needed a physical copy.

When Goddard went back to collect the shells, they were gone. It took months and many ebbs before he finally got his hands on another tiny seashell. Eventually he grabbed four copies to study.

Even then, the Valentich-Scott style eluded him.

“That really started the ‘hunt’ for me,” recalls the museum curator.

“If I suspect that something is a new species, I have to go through all the scientific literature from 1758 to the present day. This can be a daunting task, but with a little experience it can go pretty quickly.”

During this intense search, scientists found an illustration of a fossilized shell drawn in 1937.

It was collected by a local woman named Edna Cook in the Baldwin Hills of Los Angeles and considered by scientists of the time Bornia cookie (The genus name has now been changed to Cymatia). This archaeological site is dated between 28,000 and 36,000 years old, representing a time in the late Pleistocene when sea levels reached much further inland than today.

When Valentich-Scott requested the actual museum specimen on which the illustrations were based, he found a perfect match. This was the same type of clam that Goddard found at Naples Point, just off the Santa Barbara coast.

It was still alive.

“There’s such a long history of shelling and malacology in Southern California — including people interested in the harder-to-find micromolluscs — that it’s hard to believe nobody has found even our little cuties’ shells,” says Goddard.

No one really knows what habitats these clams prefer or why they once left southern California. But researchers suspect these “living fossils” only recently returned to the region, having been carried north as larvae during the 2014-2016 marine heatwaves.

This is not the first surprising discovery of a living marine animal believed to be extinct based on fossil evidence, nor is it the oldest.

The giant coelacanth was also once thought to be extinct, known only from its fossilized remains, but it turns out these giant fish are still lurking out there, deep as they have been for more than 65 million years.

C.cooki could be the latest fossil to rise from the dead, but is unlikely to be the last.

The study was published in ZooKeys.