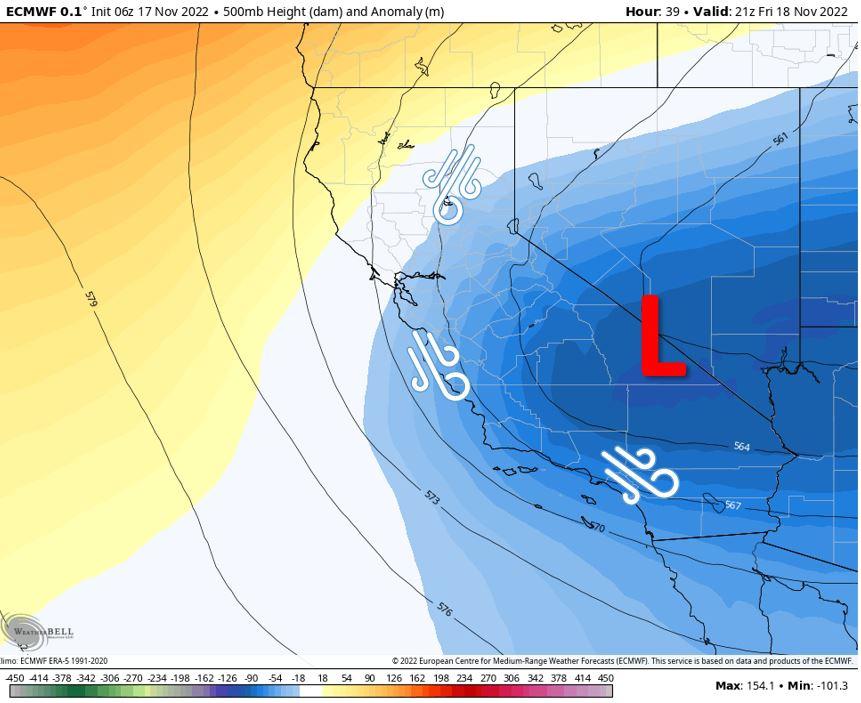 California just can’t seem to recover from those pesky offshore winds. Weather models are signaling another low pressure area for Friday and Saturday, sliding into the Sierra Nevada and Central Valley. This system will have the qualities of an “inside-slider,” meaning residents along the state’s coastal mountains can expect a surge in NE winds this weekend. So what can the Bay Area expect with this next round of offshore winds?

Dry air will begin pouring into the western slopes of the Sierra Nevada on Friday, warming as it slides toward the Sacramento Valley. It will act like a giant hair dryer over Northern California, zapping all the clouds and fog in its path.

These charged northeast winds will descend over the mountains of Napa County and the Diablo Range by Friday afternoon, stirring up gusts that will easily reach 40 to 50 miles per hour on the highest peaks in the Bay Area — including Mount Diablo and Mount St. Helena.

Thankfully, weather models like the American and European do not anticipate that the strongest of these winds will make it as far as the Oakland Hills, Napa and Sonoma Valleys, and the San Francisco Peninsula. Instead, the region can look out for breezy 15- to 20-mph gusts, occasionally bumping up to 30 mph in some of the higher peaks like Mount Sutro and the hills that line the Marin Headlands.

The 100 Hour fuels along the North Bay Mountains took some losses from this week’s Diablo winds.

But thanks to all our recent rains they are still running above average for the season.

This puts us in a good position to fend off the next round of weak Diablos this weekend. #CaWx pic.twitter.com/uAoBnBROea

Thanks to all of our recent rains, fire concerns across Northern California are also low. The latest moisture content figures in the North Bay show that soils and vegetation are still saturated, even after the Diablo winds earlier this week. The likelihood of new fires spreading out of control is therefore low.

The southern half of the state won’t be so lucky

Unfortunately for residents of the LA subway, these offshore winds — known to residents as the Santa Ana winds — will roar into the mountains of Santa Monica and San Gabriel. Because of the curvature of the low-pressure system, these mountain ranges will be exactly where these winds will be strongest. That means gusts in the 60 to 80 mph range can’t be ruled out when the system moves into southern California on Saturday.

Because Southern California hasn’t received as much rain from recent wet systems compared to its northern counterpart, and because the region’s vegetation consists mostly of shrubs as opposed to alpine trees, it is more susceptible to fires during this next wind bout. All of these attributes play a role in the National Weather Service’s Oxnard office’s decision to issue a fire weather warning for western LA County and Ventura County from 1:00 a.m. to 10:00 p.m. Saturday.

For now, it looks like the Bay Area — and most of Northern California — has dodged a bullet in next weekend’s Diablo wind event.

Breakdown over the weekend

A brief warm-up is coming to town as daily highs climb from the low 60s to the high 60s between Friday and Saturday. Residents of Noe Valley, Castro and downtown can look forward to mild afternoons thanks to warm, dry northeast winds. These winds are generally between 5 and 10 mph east of Sutro Tower on Friday morning, but gusts will pick up to 25 mph closer to the water. That means North Beach, Dogpatch and most of Hunters Point could see a pretty windy Friday afternoon. Westside residents in the Sunset and Richmond districts will expect lighter winds thanks to the windbreak cast by Mount Sutro. The winds will then calm down on Friday evening.

By Saturday, temperatures will peak in the upper 60s across the city thanks to remnants of warm Friday winds, but don’t expect them to last too long. A cooldown begins on Sunday and lasts until early next week. Cooler northwest winds roll into San Francisco Sunday afternoon, pushing daily highs into the low 60s.

A cold Friday is forecast for most of the coast along Highway 1 from Pacifica to Half Moon Bay. Watch for highs that struggle to reach 60 degrees before dropping rapidly after sunset. Thankfully, some welcome warm air will hit the coast on Saturday, pushing daily highs into the upper 60s. However, expect some windy conditions with this setup, particularly along Half Moon Bay where short winds of 15-20mph could develop on Saturday afternoon. Temperatures will then start to drop on Sunday as the north-easterly winds slowly switch to north-westerly winds by the end of the weekend.

Watch for a similar temperature swing across the rest of the peninsula this weekend. Friday’s highs will be in the low 60s between San Francisco International Airport and Millbrae. You can also expect brief gusts of up to 20mph across the peninsula on Friday as dry northeast winds pick up. Slightly higher daily highs are expected for Friday as you head south on the 101 towards Foster City, Redwood City, Menlo Park and Atherton. You can look for highs in the mid-60s along this section of the peninsula, along with breezy 15-20 mph winds. Winds ease quickly on Saturday and temperatures will peak along the 101 corridor in the upper 60s before northwesterly winds erode Sunday’s highs by about 3 to 5 degrees.

A cooling trend is scheduled for Sonoma, Napa, Marin and Solano counties this weekend, but it will come at a price. Light to moderate northeast winds will roll into the Mayacamas Mountains in Napa County, drying out most of North Bay. Humidity will drop on Friday and Saturday as they struggle to climb into the single digits. Dry air and breezy 20 to 25 mph winds will then rush into the Petaluma, Napa and Sonoma valleys on Friday. Weather models indicate some sections of Highways 29 and 101, and gusts of up to 30 miles per hour could be seen on the Marin headlands, but that depends on how quickly those winds make it to the valley floors. Look for clear skies and highs near 70 degrees on Friday.

On Saturday the winds will slowly begin to shift and become onshore in the afternoon. That means the valleys can expect a slightly cooler Saturday afternoon with daily highs only hitting the upper 60s. Temperatures across the region will drop to the mid-60s once northwesterly winds pick up off the Sonoma coast on Sunday. On the plus side, humidity will rise again and puffy cumulus clouds will once again be dominating the sky just before sunset.

A similar temperature trend is emerging for residents along Highway 37 from Novato to Vallejo, Benicia and Cordelia. The extra humidity on Sunday should allow clouds to gather by 4pm, so keep an eye out for the gorgeous sunset views in this stretch of the bays.

Light winds from the East Bay hills will blow into Oakland and Berkeley today. This will help transmit 15 to 25 mph gusts to most of the I-80/880 corridor between Richmond and Fremont. These dry, breezy conditions will also clear any clouds in the sky, meaning temperatures are likely to climb into the upper 60s this afternoon. The wind will decrease on Saturday. But be sure to hydrate; Friday’s winds will leave a dry mass of air that will spread east of I-680 to cities like Antioch, Brentwood and Walnut Creek.

Saturday will be a warm, dry day with highs near 70 degrees. Winds will then roll off the delta into the San Ramon and Livermore valleys on Sunday, signaling the return of a cooler northwest flow. Northwest winds will enter the I-880 corridor through Sunday afternoon and maintain highs in the mid-60s across the region.

Daily highs will hit the mid-60s in the Santa Clara Valley this weekend. Sunshine and warm, dry air will pour into San Jose, Cupertino, Alum Rock, Los Gatos and Robertsville by midday each morning. Aside from some 10-15 mph northeast winds on Friday, winds will be light for most of the weekend.

The temperature pendulum will swing in the Santa Cruz Mountains this weekend, where highs will rise from the low 60s on Friday to the high 60s on Saturday and then back to the low 60s by Sunday. This will be thanks to the northeast winds hitting Highway 17 this weekend. These winds will bring in warmer air from the Santa Clara Valley on Saturday. A similar temperature trend is emerging for Watsonville, Capitola, Santa Cruz and Davenport as northeasterly winds sweep in from the Santa Cruz Mountains and clear all fog in Monterey Bay on Friday and Saturday. But the colder air will flow straight back into Santa Cruz County by Sunday, pushing temperatures back into the low 60s.

Gerry Díaz (he/she) is a weather forecaster for the newsroom of the San Francisco Chronicle. Email: [email protected] Twitter @geravitywave