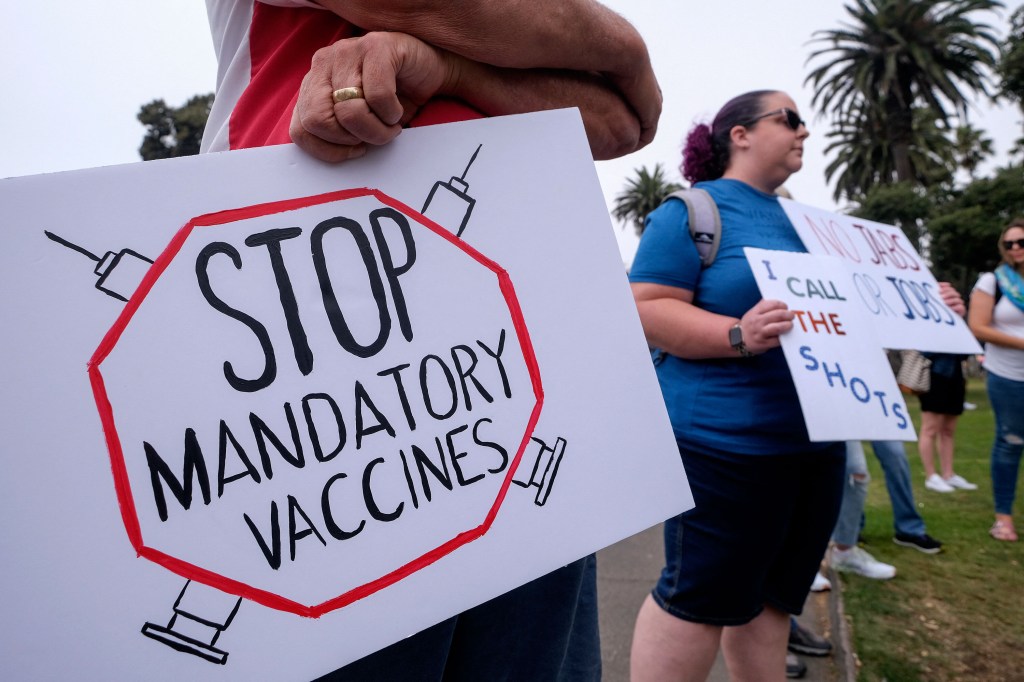 As an emergency room physician at Stanford and Mills-Peninsula Hospitals who has treated hundreds of COVID-19 patients, Dr. Ram Duriseti recalls that early in the pandemic he resisted a dominant treatment strategy of putting the sickest patients on ventilators not only to help them breathe but also to reduce the spread of the virus.

The medical world has since backed away from such aggressive use of ventilators, Duriseti said, but he worries his professional instincts could cost him his medical license in the near future under a new California law Gov. Gavin Newsom signed into law in late September. Slated to come into effect next year, it will stop doctors from spreading misinformation about COVID-19.

Duriseti, along with four other California physicians, has filed a federal lawsuit against Newsom and the state medical association, arguing that the law violates the constitutional First Amendment physicians’ freedom of speech and the Fourteenth Amendment right to due process.

“Rarely does a state legislature pass a law that is so patently unconstitutional,” the complaint reads. “It’s even rarer for a governor to sign this law.”

It’s unclear how the new law could affect doctors’ bedside decisions at crucial moments of care. During the peak of the pandemic, the medical community and public health experts sounded the alarm as misinformation about vaccines and treatments spread online, polarizing the public and selling discredited cures like hydroxychloroquine to COVID deniers.

The bill’s drafter, Rep. Evan Low, D-Campbell, did not respond to requests for comment on the lawsuit last week. He told other lawmakers this year the bill was “crucial to address the amplification of misinformation and disinformation surrounding the COVID-19 pandemic.”

“Licensing physicians, physicians and surgeons enjoy a high level of public trust and as such must be held accountable for the information they disseminate,” Low said in comments to the state assembly on his AB 2098 bill, co-sponsored by the California Medical Association. “Providing accurate, science-based information about the pandemic and COVID-19 immunizations to patients is essential to protecting public health.”

Newsom, signing the bill, said he understands concerns about the “dissuasive effect” it “could have on physicians and surgeons who need to be able to communicate effectively with their patients about the risks and benefits of treatments for a disease.” talk that has just occurred in recent years.”

However, the governor added he was satisfied that it was “narrowly tailored to apply only to the egregious instances where a licensee is acting with malicious intent or clearly deviating from the required standard of care while dealing directly with a patient under his.” care interacts.”

Jenin Younes, an attorney with the New Civil Liberties Alliance, a Washington, D.C. nonprofit that is handling the lawsuit on behalf of the doctors, said the governor’s reasoning had no legal weight and the law was being interpreted solely based on his language Complaint argues is too vague and invites abuse.

“If you’re afraid to speak up because you think you might be punished for it, it can lead to people censoring themselves,” Younes said. “Scientific consensus is undefined. It means doctors will be afraid to say things the law shouldn’t even say.”

Northern California’s ACLU last week asked the courts to block the law, arguing it “does not strike the right balance between free speech and patient safety.”

The plaintiff physicians have been vocal in the pandemic health policy debate, publicly pushing back on school policies and mandates. Duriseti and Dr. Tracy Beth Høeg are part of the Urgency of Normal group, which in June urged the Centers for Disease Control and Prevention to roll back school policies to minimize disruption from quarantines and end vaccination mandates.

dr Aaron Kheriaty is a private practitioner who testified before a Senate panel on COVID policy in January. dr Pete Mazolewski is a trauma surgeon at John Muir Health who said his approach to delaying the immediate removal of an inflamed appendix in favor of antibiotic therapy has since become standard.

and dr Azadeh Khatibi is a Los Angeles doctor who said she owes her life to a doctor who was willing to defy the medical consensus regarding her own diagnosis with an unspecified life-threatening illness, for which she was given only a 25 percent chance of survival another five years. At the time, she said, the standard of care was to avoid aggressive treatment, but she followed a doctor’s advice to the contrary and made a remarkable recovery.

“Had my doctor’s speech been cool to only advise and offer ‘consensus’ treatments, I might not be alive today,” Khatibi said in a court statement.

Several of the doctors said they had been threatened on social media that they would be reported to the State Medical Association once the law went into effect. The lawsuit notes submissions from a Phoenix pediatrician, Chris Hickie, who called the doctors “quacks.”

Hickie claimed in a brief interview this week that the plaintiff doctors “all deserve to lose their licenses,” saying, “I hope their lawsuits are dropped.”

He is part of a “No License for Disinformation” group of doctors who have called for a review of the licenses of doctors who they say have promoted fringe theories and thwarted the public health fight against the virus.

Duriseti said in a court statement that early intubation of critically ill COVID-19 patients is a practice put in place primarily to protect healthcare workers, but that “as scientific knowledge and understanding of the disease advance, we are keeping pace with it.” of invasive ventilation as the primary intervention.”

While some patients eventually require invasive ventilation, this puts strain on the lungs and requires sedation to control gag reflexes. A June 2021 anesthesiology and pain medicine survey on the intubation of COVID patients found “no association between the time of intubation and the mortality of the infected patients” and that “non-invasive ventilation may have survival benefits”.

“When the ‘consensus’ was still being reached on intubation, I put the well-being of my patients first and advocated non-invasive ventilatory support whenever clinically safe and feasible,” said Duriseti. “Although my approach was later proven to be correct, since my clinical advocacy at the time I administered this treatment ran counter to ‘consensus,’ if AB 2098 had been the law, my clinical advocacy could have been subject to professional penalties.”

A first hearing on the federal lawsuit is scheduled for December 12.