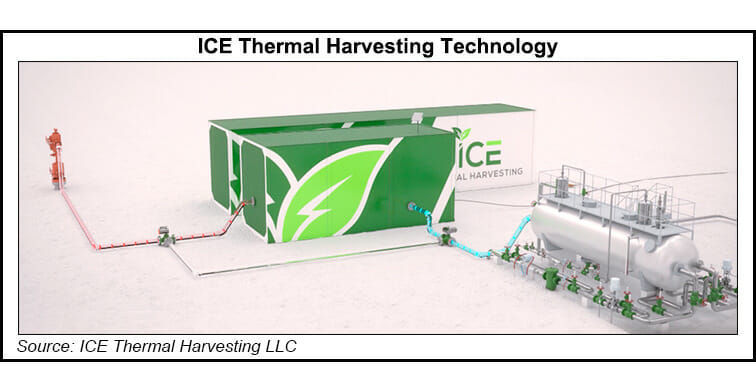 The Golden State’s largest oil and natural gas producer, California Resources Corp. (CRC), has partnered with ICE Thermal Harvesting LLC and the University of Houston to use zero-emission electricity for on-site operations.

The pilot project, launched in October at CRC’s flagship Elk Hills oil field, aims to test the feasibility of capturing thermal energy from production facilities and converting it to electricity that will continuously power exploration and production (E&P) operations would provide.

The project “…will not only provide zero-emission electricity, but will ultimately increase overall efficiency” for CRC’s operations, said ICE co-founder Ben Bodishbaugh.

Under the program, ICE would receive aggregated liquid production from 11 CRC Elk Hills wells in the San Joaquin Basin. ICE would use its Icepack heat-harvesting unit along with ORC (Organic Rankine Cycle) technology, which enables heat recovery from lower temperatures, to harvest thermal energy from geological formations.

The ORC and Icepack system, a modular, mobile system, requires no additional civilian infrastructure or third-party engineering, procurement and construction, according to ICE. The net electrical output of a system is around 200 kW, it said.

According to the CRC, the project could benefit E&P due to reduced emissions, postponement of decommissioning obligations and increased power supply reliability.

If the commercial and technical elements of the pilot project are successful, CRC may apply the technology to other areas of the Elk Hills field. The company may also transfer the technology to its assets in Buena Vista, Yowlumne, Kern Front and Kettleman in California.

If successful demonstrations follow, CRC said it could target additional rates that could total 6MW of power generation.

Having entered into a joint venture (JV) with Brookfield Renewable Partners LP, CTV is “now focused on execution and continues to see a tremendous opportunity with the passage of the Inflation Reduction Act” and its associated “45Q increase.” [tax] Incentives,” said CEO Mac McFarland.

CRC, which is aiming for full net-zero emissions by 2045, said the global carbon capture and sequestration (CCS) project pipeline has grown 44% over the past year.

“For permanent sequestration, we see a growing number of new opportunities for Carbon TerraVault in the new energy economy, new contenders in hydrogen and ammonia, renewable diesel,” said McFarland.

CTV was also supported “by” Senate Bill 905, “which focused on advancing and streamlining the approval of CCS in California,” McFarland said. The bill banning the use of carbon dioxide in improved oil production has moved his “CalCapture project to permanent storage…”

Through 2023, “CRC will continue to advance the operations of Carbon TerraVault,” said CFO Francisco Leon. “That may require some additional facilities to prepare certain reservoirs for CO2 injections. We anticipate that the majority of this cost will be recouped through the $10 per tonne purchase into our JV partnership.”

For Q3 2022, CRC operated three drill rigs in the San Joaquin Basin. E&P operated two drilling rigs in the Los Angeles Basin. CRC drilled 36 holes in Q3 2022 and had a total of 42 online. Earlier in the fourth quarter, CRC said it has four active drill rigs and expects to operate an average of three drill rigs at its Elk Hills, Buena Vista, Wilmington and Huntington Beach fields for the remainder of the year.

Compared to the same period last year, net production was down reflecting the independent company’s exit from its Ventura Basin acreage in late 2021 and the decline in NGL and natural gas production at San Joaquin. In the third quarter of 2021, CRC produced an average of 102,000 boe/d with 62,000 b/d oil, 13,000 bbl/d NGLs and 160 MMcf/d natural gas.

CRC achieved an average realized oil price of $97.96/bbl in Q3 2022, excluding the impact of cash settlements on derivative contracts. The Independent noted that realized oil prices fell compared to Q2 2022 on “the slowdown in global economic activity and ongoing releases from the US Strategic Petroleum Reserve.”

CRC said it will raise its 2022 operating expense guidance to $760-790 million from $725-755 million, primarily due to higher natural gas prices, electricity prices, and inflation and changes in its well mix.

The E&P noted that it was taking steps to limit the impact of the bloated market by contracting materials and services for periods ranging from one to three years. CRC has also taken steps to increase its inventory levels of items commonly used in E&P activities to accommodate potential supply chain operations.