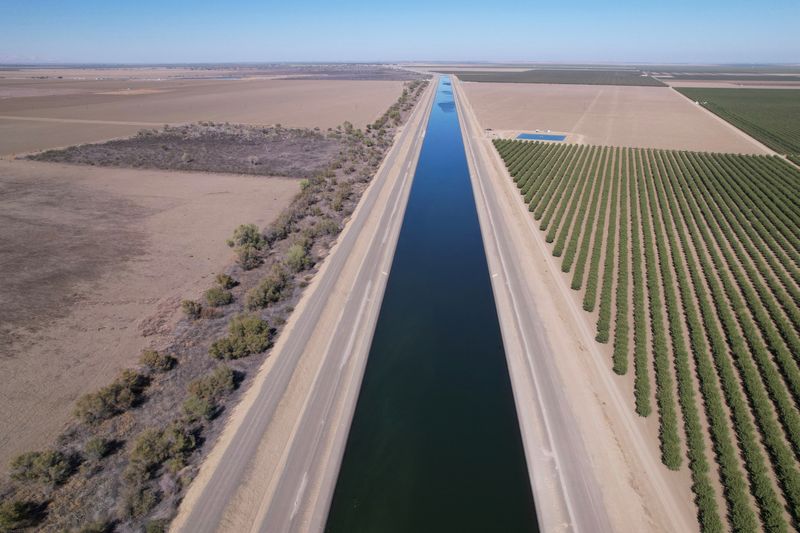 HURON, Calif. (Reuters) – The land along Arroyo Pasajero Creek, midway between Sacramento and Los Angeles, is too dry to farm some years and dangerously flooded others.

Amid the cycles of wet and dry — both phenomena exacerbated by climate change — a coalition of local farmers and the nearby city of Huron is trying to transform former hemp and tomato fields into giant reservoirs that can hold water when it’s wet seeps into the ground years.

This project and other similar projects in California’s Central Valley aim to capture floodwaters that would otherwise pour into the sea or damage cities and crops.

Traditional water storage in the form of reservoirs in rivers pollutes the environment.

With parts of California suffering a historic drought, water in the Central Valley was so scarce that year that Huron was allocated only a quarter of the water it was supposed to receive from the U.S. Bureau of Reclamation.

The city, one of California’s poorest, had to buy water on the open market, increasing residents’ bills, engineering consultant Alfonso Manrique said.

The new project, known as the Recharge System, turns unused fields into large ponds to store water so it can seep into the porous rock and soil beneath, creating or restoring an aquifer rather than rushing to the sea. The city is building a new well to be fed from the aquifer, Manrique said.

Catching the runoff will also help protect the city of fewer than 7,000 from catastrophic flooding.

The project near Huron is one of about 340 recharge systems proposed by California water authorities — enough to save 2.2 million acre-feet by 2030 if they are all built, the state Department of Water Resources said . That’s enough for 4.4 million households for one year.

“I hope we can make water more affordable for our residents,” said Huron Mayor Rey Leon.

Outside the United States, countries including India are also beginning to increase the use of replenishment ponds to store water in natural or man-made aquifers. Water use and resilience are among the issues to be discussed by leaders at the United Nations COP27 climate summit in Egypt this month.

While the idea of ​​storing water underground isn’t new, a recent California law regulating groundwater use has sparked a spate of state-funded projects.

In the small community of Okieville, about 40 miles (65 km) east of Huron, the Tulare Irrigation District is building a new refill pond on land purchased from a local farmer, said Aaron Fukuda, the district’s general manager.

A number of Okieville residents ran out of drinking water during the state’s last major drought, which lasted from 2012 to 2016. The new pond, on approximately 20 acres of former farmland, will help channel the water underground to store it for both residents and agriculture.

In addition to the comparatively small projects being built by rural water districts and farmers, the huge Metropolitan Water District, a regional water wholesaler serving southern and parts of central California, is building a 1,500-acre high desert replenishment pond near Palmdale. in cooperation with the local water authorities.

California’s intricate networks of reservoirs, rivers, and aqueducts were considered engineering marvels when the state and federal government built them in the mid-20th century.

But the system relied on damming and diverting rivers and flooding ravines, damaging their ecosystems. The last large dam was built in 1980. Since then, the state’s population has almost doubled to 40 million people.

California’s agricultural economy, one of the largest in the world, largely relies on irrigation to water its crops, further straining the system.

Now new reservoirs are difficult to permit and expensive to build. The underground storage projects, according to Ann Hayden, water expert at the Environmental Defense Fund, “will be easier to finance, they will be easier to permit, and they will receive more public support.”

These man-made aquifers and subterranean water banks won’t solve all of California’s water problems, but they can make a significant dent, said Sarah Woolf, a water consultant whose family owns some of the farmland used for the Huron project.

Beneath the agricultural land served by the Huron Project is space to store 1 million acre-feet of water, or about 326 billion gallons — enough to power 2 million homes for a year.

“These are needed everywhere,” Woolf said.