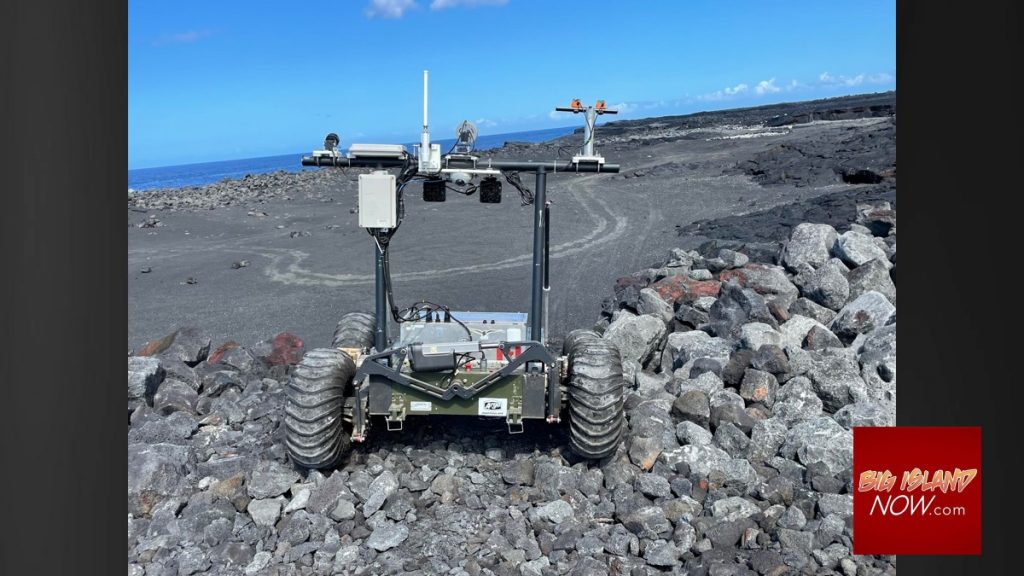 During a space exploration simulation Wednesday, the 700-pound rover wasn’t on the moon — it was in Kailua-Kona on rugged volcanic terrain that mimics the lunar surface. The rover’s drivers were not in Hawaii but more than 2,000 miles away in California.

“It’s not that easy to pick a controller and drive it like a remote control car. There is a method to this,” says Christian Andersen, head of the PISCES program. “The physics you have to overcome isn’t as simple as touching a button. It takes planning and patience to avoid falling over a cliff.”

Anderson said there are two ways a driver could operate the rover: using a trackpad or by entering line instructions.

The simulation – a partnership between the University of Hawaii at Hilo’s Pacific International Space Center for Exploration Systems (PISCES) and the International Moonbase Alliance – was part of the Moon Village Association’s annual workshop and symposium.

The Moon Village Association was founded in 2017 as a non-governmental organization based in Vienna, Austria. It acts as a permanent global informal forum for stakeholders such as governments, industry, academia and the public interested in the development of the Moon Village. More than 50 countries are represented in the association.

The PISCES rover has been a learning platform for university students for several years. First acquired by the Canada Space Agency in the early 2000s, the rover has given students and interns in the PISCES program the opportunity to develop cameras for navigation, computer control systems and other operational functions.

The simulation gave the students a chance to see how the software on the exploration device could be improved.

Andersen said Wednesday’s simulation also gave the students ideas for future designs. One involves adding controlled time delays. A rover on Mars or the Moon doesn’t immediately respond to a command – it can take several minutes.

That explains why Rodrigo Romo, manager of Maunakea’s Visitor Information Center, said a rover isn’t like a typical vehicle: “You want to drive it slowly.”

Another project the design students are working on is creating a better sense of depth with a stereoscopic camera setup that offers a human-eye perspective.

Wednesday’s simulation was the second of its kind since International Moon Day in July, when students from Pakistan, India, Austria and Costa Rica operated remote-controlled lunar rovers at Puu Waa Waa Ranch in Kona and in Canada. It was organized to support and celebrate lunar exploration.

Andersen said rovers offer the opportunity to explore space environments like Mars and the Moon without risking an astronaut’s life. Rovers and robotic systems are also used for the basic infrastructure for long-term construction.

The island of Hawaii has been a proving ground for space exploration since the 1960s, when NASA first trained Apollo astronauts and tested the lunar rover systems. NASA considered the area to be one of the most realistic terrestrial and lunar-like ones it had found, due to the high altitude with greater insolation intensity, arid ambient weather conditions, and the availability of lunar regolith-like deposits of volcanic ash.

Andersen said there are currently at least three rovers on Mars.